I think that's what I will be known as forever more now.  Hey ho, it could be worse.  It did have a happy ending and it did fast track my selection for a little race I was so hoping to do this September...which hasn't been announced and I've not been given the go-ahead to blog about, so I won't :-)

Selection for said (not very) cryptic race has been my main focus since I got over the never-again factor from my first and last similarly timed race last September.   Hence my new found love of long and flat training runs and races in 2012. Although since my notification - and due to the fact that I've banked enough boring miles -  I've rekindled my relationship with my beloved Inov-8s and some bumpy trails. Ah hills...how I have missed them.

I turned down the chance to run on the Scotland team at this weekend's Anglo Celtic Plate, as I'm not comfortable with the idea of running the GUCR, a 100K road road and the cryptic one in such quite succession. I felt a bit of a a*se turning down the opportunity, but I had to be realistic. Two, yes. But three would a big ask. I have, however, put myself on the waiting list to get a place on the Devil o' the Highlands race on August 4.   With experience of four Devils races and one 100K, I know which one causes the less destruction.

So since the GUCR...and for reasons unbeknown to be..I've done far too many midweek runs on the canal path. Maybe it's like Stockholm Syndrome!! Or just because it's handy from home/work/club. Either way, you can imagine how many jokes I've heard about falling in. Boom, boom!

I've had four consecutive weekends off road and loved every minute of it! To summarise:


The first on June 23 was with the GM, when we took on the duty as the unofficial moral boosting department for the West Highland Way Race. It's been well-documented that it was the worst conditions in the history of the race and I can vouch for that. We ran backwards (not literally running backwards) from the Glencoe Ski Centre to Auchtertyre. I didn't even want to get out of the car the weather was so bad. We dished out whoops, hugs and high-fives for 20 odd miles. Despite the conditions, there were some fantastic performances. Firstly, Terry Conway breaking Jez Bragg's long standing record (by five minutes) in an amazing time of 15:39. Rosie Bell finished first lady in her seventh race finish. I was absolutely delighted to see Rosie storming through. She's always been a really good runner, but she just had to step it up a bit. And step it up she did. Congratulations to everyone who battled (or waded!) through the course. Especially to my hard-as-nails buddies and first time finishers Silke and Caroline.

The second on June 30 - again with the GM - we did a 30 mile out and back on the WHW from Balmaha to Inversnaid. It was a lovely day. Muggy, but dry. After a wet and warm week, the midges were out in force. There was certainly no hanging about.  There are lots of up and downs and gear changing on this section, so it was just what I needed.

July 7 was 19 miles on the Kilpatrick hills, again with the GM. It's a right ol' mix bag of a route, which starts with a steep ascent out of Hardgate. Regardless of the conditions, wet feet are guaranteed.  The circuit takes in fabulous rocky trails, grassy slopes, faint tracks, armpit deep flora, tree and fence climbing, a stomp up and over the whangie, along the deathtrap that is the A809, on to the WHW, rolling country roads, across the fields and back the way we started.  Until we came face-to-face with a bull (remember I'm even terrified of cows) so we had to back track through shin-deep mud.   I'll admit, I'm sometime prone to a bit of exaggeration, especially when blogging.  During post-run texting with the GM, she admitted may have exaggerated the situation too.  I said "face-to-face was a bit of stretch" and she replied "I've said we were chased :-)".  Regardless, we were scared sh*tless!

Last weekend (July 14) I did a  36 mile (from Bridge of Orchy to Fort William) Devil's training run with Bob and Lucy - the latter claiming to be "unfit" and had done "very little training lately". From the supremo that won bronze at last year's IAU Trail World Championships (oh and also holds the WHWR record and won the CCC in Mont Blanc), this should be misconstrued with anything less than awesome. As we left the car, Lucy was up Orchy hills like a rat up a pipe, leaving Bob and I looking anxiously at each other. Although I was running really well - by my standard - they were both very gracious about hanging back for me. I think Bob's performance was more to do with testosterone rather than athletic ability though, especially when he challenged Lucy to a race up the Devil's Staircase.  I knew it would end in tears. Man tears. And I was right. 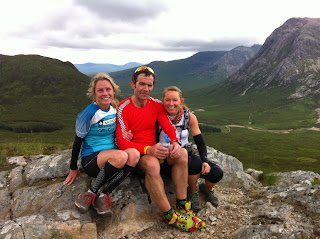 The West Highland Way is always pretty busy with happy trekkers during the summer. The scene on the Devil's Staircase was what I imagine a UFO sighting would be like. Knackered trekkers, mouths a jar, stopped on their zig-zag tracks to look up and watch this slip of girl running up to the route's highest peak.  No prizes for guessing who won.

A fabulous day out with great company and lovely weather.  Skint hands and knees after a spectacular fall though.  Shock! Horror!

So, now I'm just watching for my name to move up the reserve list so I can actually get a place in the race.

Tomorrow, we're off to Newport, Wales for the Anglo Celtic Plate 2012.  Sonic's first Scotland vest, so it's a proud moment for Team Consani.  I hope to put some updates on the ACP Facebook page over the weekend.