On Friday I took the day off work - yes, I'm slowly using up my annual leave quota on training - to run along the Glasgow-Edinburgh Ultramarathon route with the Gibbering Midget. A day off work has to warrant something substantial, so we decided on Kirkintilloch to Edinburgh, which we calculated (in that I mean, we guessed) would be in the region of 47 miles. Give or take a mile or so. 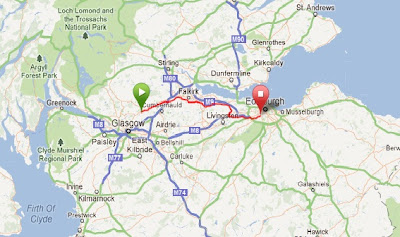 You know I love a good recce, so it was nice to cover the course and iron out any navigational issues and meet the nasty bits in person. The change from the Forth and Clyde Canal to the Union Canal in Falkrik is pretty straight forward, so that's sorted. The "horror hill" shortly after, is in fact a slope which goes along a little bit longer than you'd like, but nothing to get anxious about. Then there's two tunnels. Granted, I wasn't aware there were two. First one. No problem. Enough to knock your Garmin signal, but not enough to justify a headtorch. The second one: FFS! It's not a tunnel, it's a 600m long CAVE!! 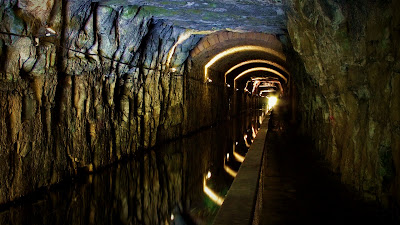 Personally, I don't think anyone should be underground ever. Well, except when you're dead. Even at that, I've told my family I will come back and haunt them if they put me in the ground. But I digress. Speluncaphobia is the fear of caving. I'm not sure how to pronounce it, but I'm pretty sure I have it. Call is caving, potholing or spelunking (as it's called stateside), it scares the living daylights out of me. Even watching someone on TV crawling through tunnel, in the name of extreme sports, makes me want to vomit.

Apparently it's called the Hallglen tunnel, but known locally as the "dark tunnel". The rat's playground (that's just an assumption) is darker than dark, with a slippy cobble stoned narrow path. And the echos and sound of dripping water, weren't exactly comforting. You would have thought I would have sprinted through, but I was resigned to a pathetic jogging shuffle, while I whimpered and clutched onto the handrail. I wasn't sure whether it was getting darker or I was passing out. The GM skipped on, totally unfazed. Although on the previous run we had to do a two-mile detour as her fear of heights wouldn't allow her to climb an out-of-use bridge, so we are now quits. Although I think I take the drama queen prize.

Other than that, it's a lovely route. Way nicer than I expected it to be. More trails than tarmac. It was a gorgeous, fresh day, which always helps. Although when we stopped to replenish supplies half-way at Linlithgow we chilled down really quickly.

The closer we got to Edinburgh, the less responsive the walkers/cyclists were. What is it with east coasters? The GM used this as an excuse to greet everyone super enthusiastically - in the style of the Mad Hatter. Hey, it passed the miles. Although one poor girl, in sunglasses that enveloped her face, thought she was about to be mugged. 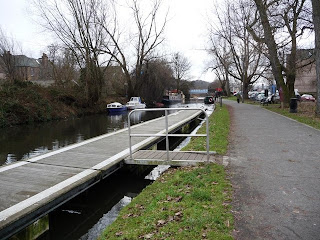 At approximate 47 miles (plus a mile or so, as I forgot to start my watch again at Linlithgow) we reached the end of the canal Edinburgh. The finish of the race. Feeling pretty good, we managed to muster up the energy to run another mile or two to the Haymarket Bar for a well-deserved refreshment before getting the train back to Glasgow.

All in all a great day out, with an average pace of 8:49m/m. A logistical dream too: Get up, go for a run and get the train back. Simples. Although after nearly 50 miles of running and pint of beer, we giggled and gibbered the whole journey home - much to the delight of the rush hour commuters. Personally I think the GM's anouncement that she was going to have twins and call them Eccle and Fechan was HILARIOUS :-)
Posted by Debs M-C at 23:00

You're running adventures are always hilarious! Can't say I'm too fond of tunnels either. Simply cannot fathom why anyone would pothole for fun. That's a pretty happy old pace for such a distance - great effort - oh and well done on your PB t'other day.

Another great run by the pair of you. 2012 is definitely the year of the canal.

Nancy's brother lives in Ecclefechan. I love trying to pronounce it! O yes and well done on your recce run.

Navigational issues? Best keep the canal to your right, surely?

Believe it or not, that tunnel has been much improved since towpaths became trendy. Don't think there were lights at all in the old days.

Fantastic that you can do 50 miles at sub-9 pace this early in the year. Must bode well for your coming races. I reckon I could just about do a 10K at that pace. ;-)