And the common denominator: The Husband :-)

Sonic and I had the rare opportunity to run together on Saturday, thanks to Mama C volunteering to take HurriCairn for the day. We decided on a West Highland Way Run (backwards) from Fort William to Bridge of Orchy (36+ miles). Ideally, we would have liked to have gone in the right (northerly) direction, but the logistics were easier to do the reverse. 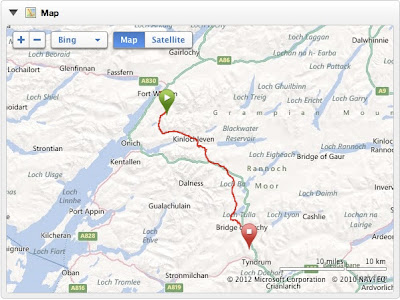 I suppose with the recent canal training runs, we've been quite spoiled. When you run from your house, even an epic run can be over before lunchtime. On Saturday we left Bearsden at 7am, caught the Citylink bus from Bridge of Orchy and didn't start running from the bus station in Fort William until 10am.

The weather forecast didn't look good. Heavy rain and a strong northerly wind. I don't think it registered how tough that was going to make the run. Running into a headwind for the best part of seven hours, across the most exposed areas and over the three highest peaks, probably wasn't sensible. Although it certainly was character building. Adding a hail storm and some torrential rain into the mix was a nice touch too.

My legs felt good from the off and I even enjoyed the ascent out of Fort William to Lundarva. It's the first time I had run up, and not down. Although my legs were considerably fresher than they usually do on that track, so that's probably why I enjoyed it.

Lairig Mor is much more runable when you're going south, but the headwind was testing my strength. The sun threatened to come out for a bit. But that was it. Just a thought. This was the only time that warranted a picture stop: Sonic above Kinlochleven. Don't worry, he hasn't been gorging on my home cooked (I'm laughing as a type this). The wind was just puffing out his clothes. 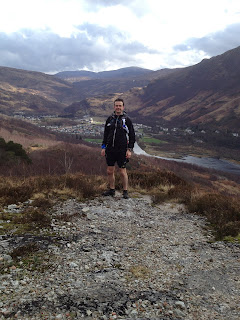 Again, the ascent out of Kinlochleven was a first for me. Although, it's relentless (5 miles with 1800 ft), it's really good training. Sonic kept telling me that it was "all about time-on-feet" which was just as well, as I'm pretty sure I was jogging on the spot for quite some time.

Although Sonic was good at keeping at my pace - I'm way to stubborn/lazy/slow to adopt anyone else's - my Mastermind Specialist Subject could now be: Sonic's Back. I know, I know, what did I expect running with someone who I actually nicknamed, Sonic? Shame his skeletal frame doesn't make a very good wind breaker.

Prior to the run, I was worried about my quads. Considering it's the first real WHW hill run (anything south of the lochside doesn't count, as that's just a trail run) I've done since the Devils race in August, I expected my quads to be trashed. I needn't have bothered though, as the wind coming off the peaks, including the Devil's Staircase, keep us honest. Safe to say, there was no danger of us toppling over.

I had a real energy dip on the road up to the Glencoe ski centre. I was craving real food and was all out of tablet and sweets. I sucked up my "emergency gel", which had been festering in a my rucksack for many months and hoped that would keep me going over Rannoch Mor.

Rannoch Mor is not the place to be in bad weather. It was basically hoods up and heads down all the way. I was frozen and emotionally destroyed. At one point I asked Sonic if my eyelids were closing when I was blinking, as I couldn't feel them moving. I kid you not, I thought I'd had a stroke. Apologies to anyone who's had a stroke/know someone who has/may have one in the future. I was just frozen rigid.

Even when we turned 90 degrees down the Drovers Road is was still full-face on. How is that possible? I did try my hardest not to moan. There's nothing worse than a whining runner, so mute was the order of the day. Although when we did speak we had to shout and repeat it about three times.

Over the Orchy hills (yes, the last mile) was the only time we experienced a tail wind, so at least it finished on a more positive note. When we finally made it back to the car and we peeled off soaking wet - exposing ourselves to the passing traffic - it was the first time I've been relieved at not doing the WHWR this year. Although my alternative won't be any more pleasant.

Three Reasons to Feel Good About Bad Runs - according to Runner's World. Although I'm going to change bad for tough. Someone wise taught me that: "there's no such thing as a bad run. Just bad attitude"

Opportunity for Growth. We can learn much more from the runs that humble us than the ones that go so well we hardly take notice. Tough runs inspire us to evaluate what went wrong. How many long runs have you had this season after which you sat back and thought about what went right? A brutally hard long run is an opportunity to refine your training process to avoid making any mistakes that might have led you to the tough run last weekend. Many times, when you reflect on all the variables, you can isolate a few things that may have caused a less-than-pleasant long training run. Some possibilities include: lack of sleep, stress, poor nutrition quality or quantity, weather, pacing, training too hard earlier in the week, travel, different terrain, not enough recovery in your training season, slacking on training, illness, and vacation. Evaluate, track, and modify as you go. A training plan is never set in stone and is always a work in progress.


Keeps you from dancing on the tables. If longs runs were easy, everyone would do it, and the value of the bragging rights you're earning would decline dramatically at the office. Seriously, though, I always say it ain't a training season until you've had a long run that knocks you off your socks and demands your attention. The tough runs keep you focused on your goal and they're a great reminder of the challenge ahead.

Mind over matter. That which does not kill us, makes us stronger (Nietzsche.) When you run a long distance race, you ebb and flow through a lifetime of emotions. The strong training runs prepare you for the highs, but it is the not-so-strong runs that inevitably simulate and prepare you to run through the lows. Running through it builds a solid foundation of mental strength that prepares you to tackle the greatest of challenges come race day. It may not feel like it now, but the run(s) that bring you to your knees are an important piece of the journey to the finish line.
Posted by Debs M-C at 23:00

Ouch! I better not blog about our week in Gran Canaria then...
It was more like "the clouds came out for a minute" ;-)

Honestly I hate running (or racing) in the cold and wet. and in the wind! Haaate it! I do not function. I suffer. I slow down. I get even colder... you know what I am talking about. You have just been there.

Character building yada yada.
I am a wimp and just hope for some better weather! ;-)

BBBBRRRRRRRR!!!!!! Sounds a nasty one, still I'd take it at the mo'. Nigh on 20 months of no running will make you crave even the crappiest of runs! lol. It's a long haul up from Kinlochleven - call me a wierdo, but I like it! Nice that you got a run together - no matter the weather, with a kid, they're rather prized.

And you're going to give up all this fun for a day and a half along a canal??

I've always thought that what does not kill us weakens us just enough that minor things get a shot at killing us. Bad attitude, I guess.

Well done Debs (and Marco who seems to have forgotten how to blog!).

I think we had better weather in the Lakes on Sunday though we did start in the snow and finish in the hail.

Decided about the Fling yet?

There's a wee caravan at Victoria Bridge that's good for sheltering in if the weather's been really bad over Rannoch Mor ;-)

great blog Debs, clearly you need to fatten Marco up with your *ahem* home cooking if
A-you want to catch
B-you want a wind shield

Quite enjoyed doing that same route backward in S2Sultra

While you two were (not) enjoying your run, I was up on the hills above Kinlochleven, and agree that the weather was dire. I think I am now getting man flu as a consequence :-(