Hoka: Don't knock them 'til you've tried them.

That should be their marketing strapline. The first time I saw someone wearing a pair of Hoka was in the Alps and I nearly died laughing. His shoes were the size of newborn babies. So radically different and in such garish colours, he didn't exactly blend in. Since then I've heard them referred to ridiculous/daft, along with the words never and ever. I'll have to admit, it took me a long time to get over the hilarity of them. Even when Richie rolled up to the 24-hour race a few months agao, there was wave of pointing and giggling from the Scotland camp.

Anyway, you know I'm a complete sucker and it would only be a matter of time until I succumb to something new. Although I bought the Bondi B, which I consider to be a much more "toned down" version of their original shoe. Less like the Tweenies and more like a road shoe. 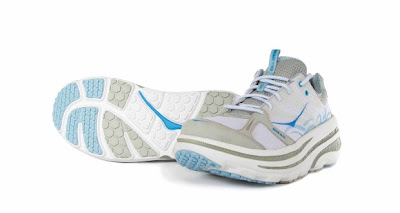 Sonic took great pleasure in mocking my latest random purchase. Although I think he finds it moderately less embarrassing than my winter running gear and ear muff combo. Personally I find that serves dual purpose. They keep my ears warm on frosty days AND they mortify my husband. Double bonus.

Here's something to illustrate the comparison... 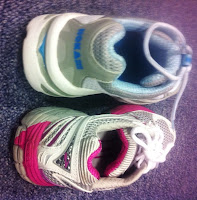 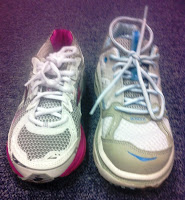 ...after seeing my Hoka, the Crazy German has made the leap. Wonder how long it will take Sonic to follow suit... :-)

With an RRP of £125, they're not exactly cheap - Although, let's be honest, you don't get much change from £100 for trainers these day - So, I'm saving them for times when I need something special. The thinking behind this purchase, would be to use them on the epic races like the 145m Grand Union Canal Race and for my next 24-hour (you knew I was going to succumb that that never-ever too!) race. Of course, I would need to try them out and break them in.

I have to admit I was slightly nervous about launching them on the streets of Glasgow. It's not a city for the faint-hearted, so my Tweenie shoes were in danger in attracting some unwanted attention. They were almost rendered nocturnal.

They do feel strange at first. Very bouncy. I was more conscious of every step, which I put down to being a little bit taller. They're so light. So light, that when the box arrived, I thought it was empty. After a few tentative miles, I was loving them. Although I still think they will take a bit of getting used to.

My second run (last Sunday) was in daylight. A nice 10-miler around the west end. I was watching people eyes to see if they would dart to my shoes. Like the attraction of person with their zipper down. But nothing. I think I can away with these. Although I did have to adopt the dance-like-you-need-to-pee tactic at the traffic lights to ensure no one's eyes became fixated on my feet.

Let's just say so far, so good. I've been converted. I'm eating my words. Or choking on my chuckles.

Rolling: Hoka OneOne running shoes utilise a unique rolling motion to deliver superior underfoot performance. The sole features a 50% rockering profile to provide a smooth, energy efficient stride transition from the heel strike through to the push off from the forefoot. It is this progressive motion that propels you forward with each and every strike of the foot.

Oversized: Hoka OneOne running shoes are the only shoes of their kind to make use of unique oversized technology. Using up to 2.5x the volume of EVA in the midsole compared to standard running shoes, they offer outstanding impact absorption and a highly comfortable underfoot feel. This oversized approach to design ensures a natural stride whether on smooth road surfaces or the most uneven trails.

Control: Hoka OneOne running shoes feature a unique patented bucket seat design. This is recessed between 20mm to 30mm into the midsole so that the heel is firmly supported allowing for precision striking and optimum stabilisation of the foot. The recessed nature of the bucket seat also ensures that there is still a superior level of responsiveness between the foot and the ground, despite the high level of cushioning.

Stability: Hoka OneOne shoes aren’t just oversized in terms of height and cushioning; they also utilise a 35% wider platform that is designed to enhance underfoot stability. This profile works to counteract the height ensuring that you are comfortable and confident with every strike. All of our uppers are engineered with flexible, reinforced sidewalls, precision fit and close lacing systems to enhance the feeling of stability and support.

Grip: All Hoka OneOne shoes are designed to synchronise with the terrain on which you are running. That is why they feature a wide variety of tactile lug constructions with a selection of depth profiles best suited to the terrain in question. The midsole is also designed with grip in mind allowing for the correct amount of deformation, so as to provide constant contact with the ground.

Lightweight: Hoka OneOne running shoes are engineered with weight in mind. All individual shoes are considered first class in their respective categories. Being so lightweight they help to alleviate fatigue over longer distances and are ideal for those who crave high-levels of performance without being weighed down.

I bought my Hoka Bondi B from Pete Bland Sports. They're on offer just now for £110, including delivery. I ordered them in my usual running shoe size, but had to exchange them for the half size up. That's a personal thing though, as I like room for expansion.

Anyway, Time to Fly. Yeah, they're best to stick with that strapline.
Posted by Debs M-C at 08:15

hey Debs, excellent report. I wore these back in Novemeber (the Bondi B version) when I ran the WHW. leg fatigue was minimal. I only used them for the long runs prior to that due to the cost of them, I think they recommend a max of about 450miles of usage.

Well my husband's argument for buying them was: They make me taller! What can I say against that?! :-) It's a bargain!

They make me taller? Did I actually say that outloud?
Certainly a quality which needs to be added to the list ;-)

On the other hand a range of 450 miles looks a bit small. With 80 miles a week replacing that shoe every 6 weeks that shoe costs me more than my car. Well almost.
Knowing me I will run this shoe until my bare feet get through to the ground. Making this a minimalist shoe :-)

Honestly I can't wait. It's 10pm now. Maybe the postman is still on his round?

And btw Hoka should pay you money for your brilliant review!
Maybe you should run that Fling and show those Hoka Pro's that you can't only write but also fly. And run too. ;-)

I will eat my Adidas Tempos if I ever buy those shoes.
Well unless Thomas beats me in a race with them on. :-)

cheers debs for that
im trying the trail ones in a few weeks..cant wait :)

I love the Bondi B's for the roads. Also, if you're a runner and a Showaddywaddy fan it's a double bonus!
Hoka prototype

Hi Debs,
Great review, was going to take a look at these now that Run and Become are stocking them. Not sure whether I should go for the Bondi B over say the Mafate. Typically a lot of my training is road/canal tow path but with a view to using them for this years Highland Fling (hoping they might reduce my quad pain in the latter stages of that race) and was unsure as whether to go for the road version (Bondi), trail (Mafate) or the road/trail (Combo XT). Any thoughts?

I see you joined the followers of my blog. It's the photos of ginger-haired women that got you, wasn't it?

The most popular new running shoe for women here is pink. I didn't bother to see who makes it; anyone choosing their running shoes by color has little to say to me.

P.S Do you do children's parties?

Max. 450 miles? That's hilarious. I've got a pair of Bondi with over 1800km or about 1150 miles on them. They are beaten to pieces but still run just fine, and that's on a 78kg dude with far less than perfect running form. Never had an EVA sole take such a pounding, great shoes. Definitely best judged by wearing and running in them, rather than being another one of these armchair speculators : )