Poxy plans and the Marcothon

One sure way of getting out of a 10K race, is your Son breaking out with chicken pox. I was supposed to be in Bournemouth over the weekend, visiting Brother Sonic and the gorgeous Gillian. And, of course, running the Boscombe 10K. Unfortunately the nursery called on Thursday morning to say Cairn had spots that were spreading like wildfire. He was sent packing along with two of his chums.

Last year we applied for the same race, but then the flights became crazy expensive, so we decided to bank the trip and do the 10K in East Kilbride on the same day. That was to be the first day of the terrible winter weather, so that idea was canned.

Next year I'm not making any plans for the last weekend in November. It's doomed.

All was not lost though, as I finally got stuck into that house spring clean that I've been talking about since, erm, spring. Anything to stop me overdosing on the Disney Channel. And my Mum took wee poxy for a few hours on Sunday morning, so I could run with the GM. Call it respite. For him.

Given the weather forecast, I thought we'd need full waterproofs and bricks in our shoes, but we were pleasantly surprised. Don't get me wrong, it was bloody awful. Just not as bloody awful as we expected it to be. At one point I was quite toasty and even contemplated removing some layers...until some t*sser purposely drove through a massive puddle and cover us in a tidal wave of icy cold water. I was so angry, I even used the c-word. Even though the industry I work in, being called a c-word is actually a term of endearment!

So, this week (Thursday, December 1) sees the start of the Marcothon. Nearly December and no sign of snow/ice yet. Touch wood. There are over 500 recuits on Facebook. Apparently there are lots of followers on Twitter too. Although I don't really understand Twitter, so you'll have to advise me on that.

Here are a few of my favourite posts on Marcothon Facebook page:

"The event of the year is back. Can't wait" Graeme Lawson, "Even If I have to limp it" Need Neilson, "Oh dear god, not again! What am I saying? Of course we're in" Sweatshop Glasgow, "Defo! Bring on the snow, none of this warm autumnal nonsense" Toby Messenger, "Great idea. I'm keen" Andrew Murray, "A fun idea. Got to give it a go" Tony Gilmour, "Discussed this with the wife who said it was a good idea as I might even lose some weight" James Savage, "In 24 years of running, I've never run7 days/wk so this should be interesting" Zoe Thornburgh, "It was a great incentive last year and met so many people. Looking forward to giving it a god again this year" Fiona Macdonald, "Third attempt. No excuses. I will finish the Marcothon" Norman Mcneill, "Last year if helped me regain my fitness and set a new half-marathon PB" Harvey Whittington "Will help me get my butt out there in what is normally a cold dark month" Ian Beattie, "Christmas day is brilliant to run. I do it every year and love it. It's so quiet it's as if you own the city" Leanne Hamilton, "Can't wait for this. I start a new job with a long commute and it's exactly what I need to avoid picking up bad habits" Lucy Blake, "Hell's teeth. If you lot are, I are" Rich McLeod, "It's December, must be Marcotime" Stan Bland, "Can't wait to go for runs in snow after nights of Christmas partying" Niall Mcleod, "It's just the challenge I need to get back to the discipline of running regular again" Kirsty Davies Snare, "As a non-runner just now sounds like a great challenge to get me running again" Alan Lindsay, "Why not? Except for business, Christmas events, two children and bad weather...I don't have any ideas why this wouldn't work" Harald Jasser, "We have a whole batch of runners from Forward Fitness Glasgow doing it" Elle Morrison, "Delighted to report the cast and crew of Batman Live the World Arena Tour are signing up in aid of Luekaemia and Lymphonoma Research" John Conroy 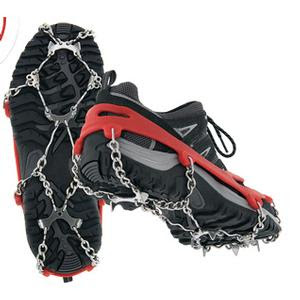 Not long now, folks. I've got my Kahtoolas ready. Last year, I managed to get my hands (well, feet) on a pair the day before the ice melted.

At £45 they're not exactly cheap, but I found a very similar alternative on ebay for less that £12. I bought a pair for my Mum and Sister - for just generally getting about on the ice - and they look like a pretty good deal to me.
Posted by Debs M-C at 08:22

All the best for your Marcothon. Keep the updates coming .... how about a blogathon ... a post a day for December to record your progress??

Cairn is doing OK, thanks. Modern medicine means he does have the itching/scratching issue.

Sorry I'm not doing it Debs, but it would probably break me... :-) Have fun though and I hope the snow stays away for you all!! :-D