Last Saturday morning, I met with the Garscube gals (and two token chaps) for a 10-mile trail run around Mugdock Park.

I probably only make club training about twice a month on average, so it was nice to catch up with some old faces and meet some new ones. Although I always feel like the new girl these days.

The run was due to start at 8:30, but there were a few minor delays. The carpark to the visitor centre was closed, so we abandoned cars outside. Then it was open, so we all moved. Then two gals were running late after an alarm malfunction - that wouldn't happen on JK's shift :-) Then we had to wait for a few to use the powder room. I decided against it as I'm so used to peeing outdoors these days, that I don't feel the need for a "make sure". Actually, I'll stick my neck out and say I actually prefer al fresco peeing over public facilities. It's also quite liberating :-) Just as well really, as I can barely make it round six miles these days.

The lovely Karen Mac was official tour guide for the day. Thankfully, as I had no idea where we were. And having to watch my footwork meant that I wouldn't be able to retrace my steps for re-run of the route in future. 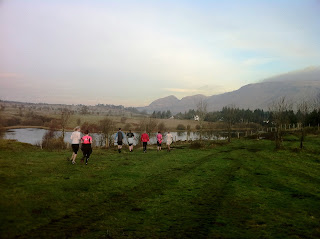 We all stayed together, so it was nice to chat to people I wouldn't normally get a chance to. A people chain of beautifully co-ordinated outfits (again, you wouldn't ge that on JK's shift) all zig-zagging though knee-deep muddy fields. Although I'm not convinced it was just mud in parts! There was lots of Squelching, shrieking and whooping.

An off- road run that doesn't require an outfit change before getting in the car or pre-washing your socks, isn't quite an off-road run. 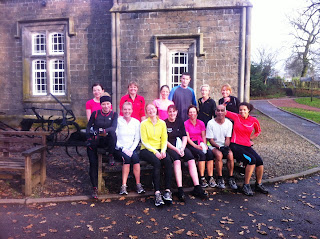 On the Sunday, I went for a hilly 14-mile road run with the Gibbering Midget - thanks to my wonderful Mum's babysitting services. The difference with running hills on the road, is you've just got to man-up and run up 'em. There's no plodding and admiring the views like you do when you're off road. Although the last hill nearly had me on my knees, it was a grand day out.
Posted by Debs M-C at 21:42