It's been a while since I had been at club training, due to a combination of recovering from the Fling, the Polaroid races being on Thursday nights and tapering for the WHW.

Since the arrival of Cairn, I do most of my training on my own, so it's always nice to have some company. The session was billed as a steady seven miles, so I thought that was do-able. Quite a hilly route, but manageable (ish) at a steady pace. If only someone had turned down the heat. Steady pace was fine, legs were fine (ish) but after four miles I thought I was going to spontaneously combust. Giving the shade of my fellow runners' faces and the lack of chat, I think it was the general consensus.

It was probably one of the few times I actually welcomed a post-run ice bath.

Yesterday, I did the Kilpatrick hill route with the Gibbering Midget. I always maintain hills are a good tester for fitness and general physical well-being. I'm glad to report, we were pleasantly surprised. A bit of edging-each-other-on in the last few miles and I'm sure we got a route PB.

Cairn and I spent a leisurely afternoon in Largs with my Mum and Sis. Cairn was very excited about seeing the ferry. Shame he wasn't so excited about going back into his buggy. Public toddler tantrums can really test your general mental well-being. 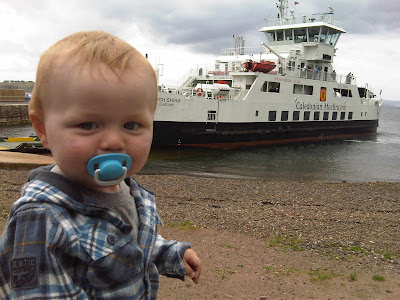 Today, I did a 4.5m easy from the house. My legs felt like someone had put bricks in my shoes and my ankles are still dodgy, but thankfully it got better as the run went on.
Posted by Debs M-C at 20:19

As I said before I'm so impressed at all of the running you have doing since the WHW, you've recovered so well.

A PB(ish) two weeks after the WHW Race?
I am so bl**dy jealous.
You are right on track for a Devil's PB.
I am still limping...

Hey Debs! We were in Largs on sat too... in fact, is that us you can see waving from the ferry behind ;-) You did very well on thurs - you recover so well from these huge races! That last bit before we turned onto Maryhill road - apache terratory or what... certainly brough about a swift upping of the pace!! xx
ps - yes, I am on blogger, which means I am working on getting the blog back up-to-date!