What's so strange about that?

I have friends who run barefoot or with books in a backpack. They run races backwards: In the dark and in the height of winter. There is one who turns up the heating and cycles (obviously on a stationary bike) in various layers of clothing, so he's prepared for a hot race day. Even though he lives in Scotland! Many run back-to-back days or split sessions, just to make sure they are completely f*cked! And many run on empty so their body is prepared to, er, run on empty. Some throw themselves off hills, knowing they will probably shed some blood on their hurtling descent. And many partake in the mind-boggling pursuit that is cross-country running.

So really, was my run to work on Friday morning really that "mental"? OK, it's an 18 mile journey and I had to start at 6am. It was a dark, cold and wet on a mind-numbing route along the A82...and I still had a day's work to do at the other end. But on the grand scale of things, I think it was positively normal. So when I arrived in the office, red-faced and lycra clad, a few heads popped over computer screens. When asked where I'd run from, I merely replied "home" only to be greeted with vacant stares. Before their eyes rolled back down behind the screens.

The only reason I did my long run on Friday was because I was going to Oban with my Sis and Sharon on Saturday. I must admit I felt quite smug knowing I had not only done my daily run before work. But I had also done my weekly long run. Double bonus.

Friday night involved pampering and preening prior to the girlie weekend. Including fake tanning - even though the weather forecast was close to freezing. I wanted to do a recovery run on Saturday morning, but I couldn't bothered to wash off my fakers first. I'm all for cleanliness, but three showers in one day is a bit extreme. So I was up before 6am to sprackle round Balloch before the sun came up.

We headed off just after 1pm. All equally fake-tanned up. It was like a traffic-cone road trip :-) The weather was fabulous. Crisp, sunny and very still. We stayed in a superior suite at the Columba Hotel - complete with sea view. It was total luxury. We had dinner at a fabulous Italian on the north pier, visited a few drinking dens, giggled and gossiped (put the world to right) and were back in our jammies before shutting time.

Happy St Andrew's Day everyone. It's great to be Scottish! From the country that brought us the telephone, television, steam engine, bicycle, penicillin...and Susan Boyle!! 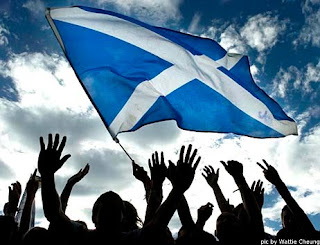 There were quite a few comments on my previous post regarding the picture of Ian. I had to laugh at the mid-air hand embrace. He must have been thinking "I don't have enough antibac hand gel to disinfect if I touch these two" :-) :-)
Posted by Debs M-C at 18:35

My question is, do you take a shower at work? I would think about running to work but then I need to shower there, a little tough.
Great job getting a long run in!

Any support would mean a lot to me!
http://www.active.com/donate/lv09lasvegas/vegas09EGould

I see you have a donation link on your blog as well. After my run and my next paycheck I will look into it. Is it for a race?