Supposedly, I'm the scatty one!

On Tuesday I bit the bullet and went out with Sonic's "fast boys" lunchtime session. Do you know the scene from Pretty Woman when Vivian walks into the shop and says: "Big mistake. Big. Huge"? Somehow I couldn't get that out of my head. Not the being a hooker bit, but more that I was potentially out of my depth. It was eight miles along the canal and then back along the Kelvin Walkway (my favourites!!). They were sauntering along at recovery pace and I was bleeding out of my eyes. After a circuit round the hills in Kelvingrove Park, I was finished. I returned to the office covered in mud and practically foaming at the mouth. I was surprised that I was 40 seconds per mile SLOWER than my usual tempo run. I think I'm the only runner in the world who runs faster on solo runs!

On Wednesday, I went out for some pre-work 800m reps. I was up at 5.30am to get all Cairn's stuff organised for nursery. Bottles made, breakfast out, lunch ready, clothes laid out, spare clothes packed. Sonic lacks multi-tasking skills, so I thought my helping-hand would see him right in the morning. How he was actually TWO HOURS late for work is beyond me. I called at 8am and was assured that Cairn was fed and dressed. Then a couple of hours later there was a panic call from Sonic saying that he had got to the nursery without Cairn's daypack, so had to do a 40+ mile round-trip home to pick it up. Yes folks, this was the boy who called me "a wee bit scatty" a few days ago. Think I'll get some mileage out of this.

Last night, we were out for the Garscube club run. Yep, running through Maryhill on Bonfire Night will certainly put a spring in your step. There was a running lecture organised for after the session, so it was a sharp start and not-so-long distance. We were splits into three large groups - which I'm guessing were the remedial class, distinctly average and the nerds.

It was a fairly easy 5.5 mile route - with a few nasty hills for good measure. Even our middle group broke up quite quickly and I was in a pack of about eight. Most of whom are usually in faster packs than me. I'm used to running alone or with a couple of people, so I found it quite crowded. Especially with obstacles to maneuver, pavements and potholes. It was hard to judge where my feet were going. Or maybe my brains a bit slow on the up-take these days. Plus it was dark and the wet leaves made it quite slippery underfoot. Anyway I don't know how it happened, but it somehow turned into a race. One person pushed the pace, we followed, we all knew we were going to fast, but no one gave up. I ended up at the back of the group hanging on for dear life...but the wheels feel off after about four miles. Thanks to Anna for hanging back and pretending she was equally gubbed. I was spent at the end, but felt great. Sometimes it's good to push yourself out of your comfort zone.

I wasn't back in my comfort zone for long, as I went out again with Sonic's lunchtime crew today. A "strides" session. Which was billed as "easy" and "perfect for pre-race training". Yep, they jogged along on the two mile warm-up out to Glasgow Green...and I was doing my 10K pace. Diagonal strides across a water-logged football pitch. Well they bounded across like a gazelles...and I stumbled behind like a Fraggle being chased. 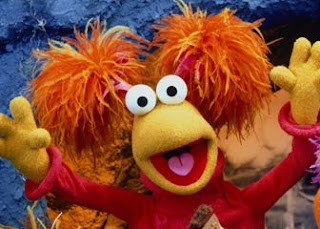 So tomorrow is the Tinto Hill Race. I know it's going to be seriously competitive, so anything above coming in last would be a bonus. First rule of racing: Never try out new gear. Yep, my shiny new fell shoes are still in the box.
Posted by Debs M-C at 16:57

It is scary how similar you look to that fraggle. Especially at 6:30 am on a Saturday morning. You saying "Time to get up" singing and jumping about with your hands in the air. Me replying "It's a feckin Saturday, leave me alone."

Enjoy Tinto. I ran up it when on a training weekend in the 70's. It's given me an aversion to hills ever since.