The trick was testing out the route of next week's Tinto Hill Race. And the treat was "having" to buy new shoes for the occasion. But the cutest Halloween delight was my boy in his fancy dress for his nursery party. 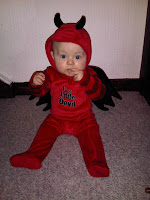 On Friday, whilst Cairn was off enjoying his first e-number feast, Sonic and I went out to Biggar for a recce on Tinto Hill.

I will always be in awe of people who can run up those inclines. I don't think running makes me go any faster, but boy does it take a lot more out of me. At the first sign of a steep gradient I was reduced to a stomp. Actually we pretty much walked all the way up. 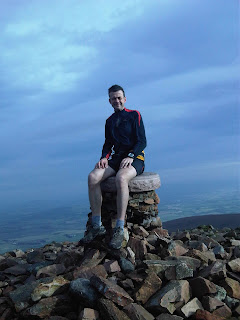 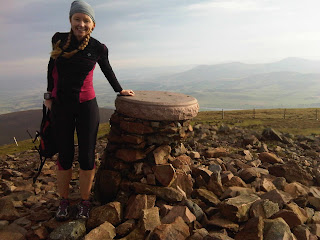 I quite like running down hills (is there anyone who doesn't like a good downhill? Doubt it) but my trails shoes weren't gripping on the muddy slopes and wet rocks. I felt I was breaking and jerking a lot, so I knew my quads were going to be shot.

What was supposed to be a nice morning jaunt, turned into a race to break the hour. Finished in 59:58. How's that for close? 42 mins up and 17 to get back down.

Cue the new shoes...Run-4-It at the Tiso Outdoor Centre were having a Inov-8 day. I took that as a sign :-) A very helpful and thoroughly knowledgeable chap helped me with my shoe choice. A tried on a few models and a few sizes, but settled for the x-Talon 212. 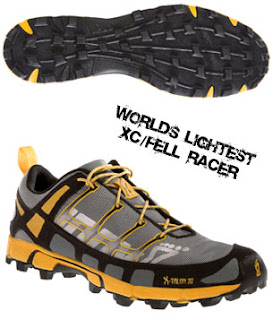 When I got to cashdesk to pay for my shiny new shoes, the assistant lent towards me and said "the guy who helped you is the owner of Inov-8" Well, if you want some expert advice you may as well go straight to the top. After a google search, it was indeed Wayne Edy the founder and MD of Inov-8. If I had known at the time, I would have got a pic for the blog.

Yesterday morning, I went out with some of the Garscube gals - Jill, Maz, Emma and Anna for a long slow run. It was the first time I had met them for a weekend run, as logistically it's a bit of a nightmare. Sonic had to get up at 5.30, to do his run with John!

I had to make a detour to buy some Deep Heat for my quads, but arrived on time for the 9.30 kick-off. Jill and Maz were running a bit late. Jill texted to say Maz was having car problems. The fact that Maz can't actually drive begs a fews questions %-) On arrival I mocked them about it not being a handicap race, but we all set off about 9.45. There was no mad rush to get going though, as Glasgow was experiencing monsoon conditions. Which held up for the whole day.

The original route was an out and back to the Erskine Bridge - along the canal. It didn't take much to convince them that a circular course round the southside was a better option. It was a great run and time went passed really quickly. It was a momentous occasion when Jill (who calls me One-pace Debs) suggested that I might be pushing the pace a bit too quickly. I could retire on that comment.

I did have to laugh when Maz said "you know you're out with Debs, when we seem to have been going for ages but making no sign of turning back".
Posted by Debs M-C at 23:46

I lovee his costume. Adorable.

Hill running waahoo come on! If only I had hills to run up you lucky sausage.