When your mojo ups and leaves...

..I often find a new pair of shoes will entice it back.

This time I actually needed a new pair of road shoes. Although I record my miles on SportTrack, I don't keep a note of what shoes I'm wearing. I presumed (possibly, maybe) my shoes were passed their 500 miles. Plus they look a bit dirty :-)

Yesterday I went off to Achilles Heel on a shoe-buying adventure. I did toy with the idea of going out with Sonic's lunchtime crew for a rep session, but my adductors have been playing up since I went out with Cairn in the baby jogger on Monday. The coach of Sonic's gang - Mark Johnston - has always been very encouraging, even though he knows I'll definitely fall behind. I must admit I do feel quite intimidated by the prospect, especially when they refer to themselves as "the fast guys". Maybe next week I'll bite the bullet.

Anyway, back to important things. Shoe shopping. After my last sports' massage from the wee-but-mighty Christine, she had suggested that I might want to up the support in my shoes to accommodate the higher mileage. I have been running in the Saucony Guide for a few years now. I've previously tried the Brooks GTS and the Asics Kayana. I'm a big fan of the Saucony, so Christine had suggested trying out the Omni. At Achilles Heel they take shoe choice very seriously. After trying on various models and sizes and parading about the store with my trousers rolled up, I settled on the Hurricane. The most expensive out of the range. At £95 I think they're the most expensive trainers I've ever bought. I tried on last season's discounted Hurricane 10, but I'd already fallen in the love with the shiny blue Hurricane 11. 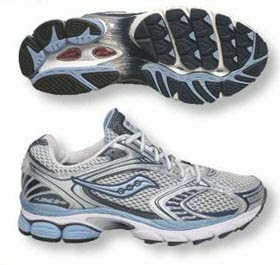 From now on, I'm going to make a note of the miles in my trainers. I think fluttering between road, trail and lightweights requires a bit of monitoring. In hindsight, maybe I shouldn't have laughed when I found Sonic taking pictures of his shoes for his SportTracks records.
Posted by Debs M-C at 18:04

Maybe that's what I need to get my mojo back!! Thanks for the idea;-)

I am just about to start keeping track of mileage in my trainers as well - I have new trail shoes and just about to get new road shoes (I might as well be running bare foot just now, but it needs to wait till pay day!). Matching - I should not have been laughing at Neal taking photos of his shoes! And good runs for me at the club twice this week so I think my mojo's coming back!
Caroline

Ok ok, new shoes it is then.
It wont be for a few days though as the Pirate arrives tomorrow with the weans and he's decided to run RS50 on Sunday.
I'm hoping that Sunday reignites the fire in my belly or the itch in my feet to get back out there.
Maybe I should set up a mojo hunt for the non runners ;-)