As previously mentioned, races for the rest of the year are kind of up in the air. I lacked direction, so I signed up for the Paisley 10K (August 30) and the Great Scottish Run half-marathon (Sept 5). Two small problems: I have a wedding the day before the 10K and I haven't done any speed training. Oh well I can do them for 1) to continue my winning streak on more medals than Sonic 2) just for fun 3) as speed training for an Autumn marathon.

Which brings me nicely on to my next subject. Autumn marathon choice. I WAS thinking Loch Ness on October 4. But now I'm drawn towards Dublin on October 26. Has anyone done either or, even better, both? I mean both, as in, to compare. I'm not considering doing both.

Mind you, after this weekend's long-run, I may can the whole idea altogether. My left knee seems very weak, like it might give way sometime. It's not an injury per se, but I concerned that it may turn into one. But should I really stop running on the basis that I many get injured? Doubt it.

Last night I tried out my super new training with a club run. It's great to go along on Thursday's, as pushing myself against other people is the main thing my training "plan" lacks.

Coach Lesley put me in charge of a pack which consisted of Emma, Anna, Alan, Dermot and Gary. Bit of a mix bag. Emma and Anna are going places, Dermot's trying to get back there and Alan's a seasoned runner. Gary's not built like your typical runner (yet) but he's got serious strength in his legs. I've watched him over the last few weeks. I probably expend as much energy shaking my head as he does powering all the streets. As most of our club runs are round Bearsden, there's always some nasty hills. It's no secret to anyone that he dislikes hills. But his method of stomping up them as fast as possible is suicidal. My attempts at advicing him how to run up and down hills fell of deaf eyes. Wathching him bounding up the hill next to Emma made me giggle. Next to Emma's petite frame and daintly stride he looked like Shrek. One day he'll get it and he will leave us all speechless. Until then I can't decide whether he's fiercly competitive or he just wants it over with as quickly as possible.

My knee was a bit touch and go from about three miles. My legs are still a bit tired and they wouldn't let me attack the hills. I even had to walk for a few seconds on Pendicle. I got a bit of a scare when my knee went from underneath me in the last mile, but it doesn't feel any worse or better.


I know this is a bit w*nky, but here's a wee story about yours truly in our local paper. Thank Davie Hall for being my PR man. The reported never contacted me. See if you can spot the mistakes. 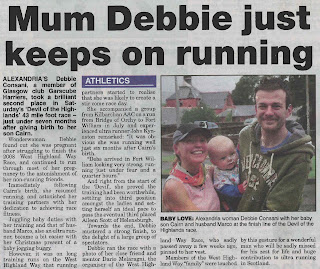 Check out that article, how cool is that!! super MAMA!!

I have a wedding to attend the day before the Paisley 10K as well. Spooky! I, however, am not doing the 10K. (:

Debs, great article and nice tribute to Dario at the end. I've done both Loch Ness and Dublin marathons, although it is quite a few years since I've done Dublin. Dublin is a typical big city marathon, without the same numbers as Paris or London - think Glasgow half marathon x 2 and you get the idea. Loch Ness is smaller, fewer people, undulating and mostly out on country roads, but very well organised. It really depends what you are looking for - I would choose Loch Ness every time but then I prefer having a bit of space and being out in the country. Dublin is probably more suited to a fast time. Hope that is some help. Ian

Given my current "on the bench" status, I would say: GIVE THE KNEE TWO DAYS OFF. Being injured s*cks. Sounds like a good plan for racing!

If I had to recommend one over the other Debbie-poos I'd plump for Loch Ness. I enjoyed Dublin, the Race and the City, but Loch Ness was nicer and better...so long as you don't need a pee at the start line.