Four days on the Way

It's only 10 weeks until the Devil o' the Highlands and I'm having a slight panic. I know many readers of this blog will think that 43 miles with a little tiny 5000ft in ascent is a walk in the park. Though for every one of you, there's a million who think it just plain stupid. But for me it's my biggest (running) challenge of the year and one that's making me slightly edgy right now.

The first time I did this race in 2007, I was a little cocky to say the least. I distinctly remember sending Sonic a weblink with the subject title "Fancy this?" My reasoning was: "surely if we can run a marathon, we can walk/jog this?". Pah! We did one training run - from Kingshouse to Fort William - which nearly had me in crutches for a week. I was truly and utterly broken. You know the runs that have you practically in tears towards the end? Let's just say I wasn't so cocky after that. I wasn't even sure I would make to the end of the race let alone make it within the 12 hour cut off time. But somehow I scraped my sorry ass over the finishing line in 8:48. It was certainly a life changing experience. Now our whole lives revolve around the glorious trails of the West Highland Way. Cairn has seen more trails than the inside of his crib. Thankfully he's so happy and content, that we can take him anywhere.

So in the midst of my panic I decided to take in two long runs over the bank holiday weekend. As Sonic was taking part in the two-day training weekend, it involved regimental planning: three shopping trips, two cars, a caravan, 450 miles of driving and 120 miles of running. Not to mention drop-off bags, checkpoint pit stops and the small matter of a small child.

My first run was from Kingshouse to Fort William. Just a piddly 23.5 miles with 3000ft of ascent. The main aims were to finish it, enjoy it and feel better than I did on my first attempt. Big tick on all three. I loved it. It was a glorious sunny day and I felt brilliant the whole way. It was great having Sonic as support, although his skills aren't as fine-tuned as mine. When I got to Kinlochleven he was in full-on panic because Cairn needed feed AND changed. As babies do. And when I got to Lundarva he was busy cleaning his car with babywipes. WTF? He did turn up in all the right places and tell me I looked good, even thought he was telling fibs. I have learnt of late what difficult, often tedious and thankless task supporting is, so I really appreciate my boys coming out.

I did (kind of) return the favour by supporting Sonic on his two-day adventure. I let him take my car and leave it at Balmaha. Surely that's helping? I didn't make it up until the troops (Sonic, JK, Sharon and Davie) were over the lochside. Davie had texted me en route and me to pick him up, as his ITB was giving him jip. No problem thought I. I'd soon be passing his pick-up point. What he neglected to mention was that he wasn't actually there yet... before he dissappeared out of mobile signal. I drove up and down the A82, in out of the farm road and back and fourth to Tyndrum. I couldn't get hold of anyone and couldn't find Davie. I was convinced he was hiding in bushes laughing at me. I swear the Nazis could have found Anne Frank quicker. By the time I found Sonic et al I was a bit on the ratty side. They duly informed me that the abandoned Davie was behind them. One more drive down the road and there he was. Looking like a drowned rate. And smelling like a wet dog. Nevertheless, he was still upbeat - considering.

After having dinner in the Bridge of Orchy Hotel and a night at the Pinetrees in Tyndrum, Sonic set off on day two of JK's pacing class. Late. Maybe he slowed down his pace a bit too much. Actually maybe that's why he goes off too fast at the beginning - because he's always late and has to catch up on time? Mmm there's food for thought.

I spent the day with Mrs JK, Dr Crazy German and Davie. At least we knew when Sonic and JK would be arriving. You can set your heart by JK's timings. When I asked Mrs JK what her thoughts were on ETAs she said with a smirk: "What, you don't have a laminated sheet with splits and pace?" I'm sure it would have been useful if we referred to it. I think JK was a little close to spitting the dummy as I continued to ask him about arrival times. Obviously not referring to said laminated sheet.

So Monday, it was back to my turn for running. I opted to run back to Balmaha to pick up my car. The original plan was to spend Sunday night in the caravan and run along the loch back to Balmaha. But after spending a rainy Sunday in the car, I couldn't face being coped up in another tin can, so we just drove home.

My quads were still very tendor, but I thought I'd give it a bash. I even put the bus timetable in my rucksack in case I decided to bow out early. I ran over the horseshoe to meet the WHW before Drymen. I took it easy and wasn't even remotely bothered that I reached Drymen three minutes behind last week's time. In hindsight the reserved pace meant I could run all the way to the bottom of Conic Hill - even the nasty inclines. And even managed to run up about 40% of Conic. My quads were only causing me grief on the downhills. Actually it took me 19 mins to get up Conic Hill and 16 mins to come off the other side. I think I mentally yelped the whole way down. Despite the slow start I finished one minute faster than last week and felt a million times better. Proper pacing definitely makes a huge difference. Doesn't it. Sonic?

On another note: On the way back from Fort William on Sunday we discussed the changes being made on the West Highland Way. Horrible new gates, removing stiles, clearing forest, detour paths etc... All because of health and safety. You can tell the decision makers have never walked the WHW. This is my favourite H&S hazard - on the way to Drymen.

The path over the bridge often floods. 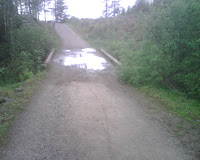 Which forces hikers/runners to walk along the small wall. Don't want to get wet feet afterall. 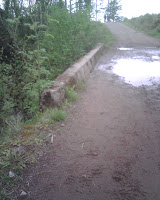 But steady those wobbly legs as there's 30ft drop on to the rocky river below. 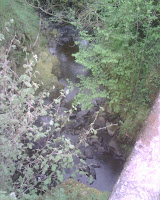 Maybe I shouldn't have pointed this out. There will probably be a handrail there next week.
Posted by Debs M-C at 22:23

sounds like you're getting right back into it, good stuff. That bridge is a beauty, trying to jump round the puddle with head spinning and sweat blurring your eyes, they're going to spoil all the fun! Richie

No reason to worry at all at the moment. Your training is going great and I think you are well ahead of schedule. You are going to have a fabulous Devils.
I remember that life changing day, "Fancy this" I also remember what you said after our first ultra. "Never again". Hey look at us now. :-)
Mxx

Great run Debs ..... and thanks again for your support over the weekend.

Do you want me to do a laminated sheet for Marco?????

Looks like you are back in the game Debs. And good to hear to enjoyed your runs.
Still a bit work to do to catch Sharon (she seems to be in sub 20h WHW Race shape)..but you will get there, like Paula did after she had her baby. But no pressure!

That laminated time sheet for Sonic seems to be a good idea. And we put the times in! I suggest 4 hours to Balamaha to start with!
;-)

wow that is huge!! and with both of you being busy w crazy activities, you really have to work together to fit everything in!