I won a trophy

And not just a little token effort, but I HUGE one.

At Garscube Harriers' annual awards presentation, I won the the award for "The Most Meritorious Performance". I have to admit it didn't come as a huge surprise as I organise the awards' do, so I knew who won everything. But I was surprised, shocked and stunned that people actually voted for me to win the award. I'm never going to be the fastest runner, so winning trophies is not not within my reach. Winning this is both the highlight and happy farewell to a fantastic year.

To recap, I won the award to setting PBs in all road races at the beginning of the year and for being the clubs' first female ultra distance runner - namely, the West Highland Way Race. I'm sure my support team's tales of woe and my relentless stubbornness were what swung the votes my way.

I couldn't have done it without the help of some fabulous people. Big thanks to Coach Lesley for my training plan. And the fact that I'm too scared of Lesley not to follow it with fine detail :-) Thanks to my support team (Sharon, Sara, Jill and Kas) who gave up two nights' of sleep to follow me along the WHW. Although I'm sure Jill was having her own little slumber party! If anyone would like to see the softer, patient and caring side to Kas - you should have been at Lundavra at 3am. Although I'm not convinced it wasn't one of my many hallucinations. And last but by no means least, thanks to Sonic - for ruining my run of great PBS! Hey, I still maintain I was sleeping at the time of conception. Just kidding. I'm sure I'll thank him for the "woman are stronger runners after childbirth" theory.

Well done to all awards winner. Especially to Sonic for winning the club marathon championship for the third year in a row. His little medal looks so cute next to my MASSIVE trophy :-) OK, I best point out that Sonic won the award in 2006. So now there's two Consanis on the plaque. No pressure Paul. 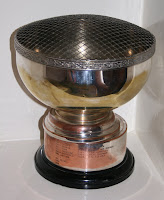 Congratulations. Even without your added assistance you've had a pretty special year. It's been nice getting to know (the three of) you and you know you're welcome at Milburn events any time. Just spend next year on PB's for baby buggy runs!

Congratulations Debs. A worthy winner. Do all your medals fit inside??

Yah cheeky bugger?!? Sleeping?
Shouldn't you be thanking me for being able to get away with eating as much chocolate as you want for the last 4 months?

Congratulations on an amazing year of running. You deserve it all. I'll reward you later.. when you're sleeping.. ;-)

Marco! My Mother reads this. She thinks it was immaculate conception :-)

Well that's a trophy! Wee Aygo can take a bath in there ;-)
Honestly you deserve this more than anyone else. Congratulations!

How many bottles of wine can you pour into that trophy bowl then? Oops, forgot no drinking just now. Tee hee.

Congratulations on a smashing year, and all the best for the next one!