It's hard to motivate myself to blog when I feel I'm wibbering on about the same stuff., but here goes...

Last week I ran a grand total of 17 miles. Four on Tuesday, six on Thursday and seven on Sunday. I pretty sure it's not classed as running as more, as I need to take more and more walking breaks. Hills are just a no-go area. During the last mile of my seven-miler yesterday, there's a incline that I didn't have the inclination to tackle, so I stopped to walk up. I thought I was walking quite briskly, but Jim Robertson stopped in his car and asked if I needed a lift. Oh the shame of it all %-)

The weather wasn't the best over the weekend. Wet, wild and windy. When I came back from my run yesterday - for reasons which escape me - I decided to cycle along with Sonic on his 13-miler. Now running into horizontal rain and wind is one thing, but cycling into these conditions is torturous. I even had to pedal frantically going downhill. I'm surprised I didn't crashed, as I pretty much had my head down for most of it. And I was more surprised I didn't spit the dummy and go home. Thankfully the last five miles the wind was behind us, so I finished the route feeling quite cheery. Albeit completely drenched. And as I hadn't been on my bike for a while, my ass was killing me.

Another shameful tale of the week: As Sonic and I got married over a year ago, I thought it was about time I got round to changing my name - especially with a new Consani on the way. You can imagine the shame of walking into the bank with a protruding midriff and a Las Vegas marriage certificate... and trying to explain that it in fact wasn't a shotgun wedding.

Book of the week: I previously blogged that I felt so unprepared and clueless on the subject of pregnancy. Now I've done a full 180 and want to know EVERYTHING. I'm a bit of a control freak, so I can get quite agitated when I don't know what's going on or if things don't go according to plan. 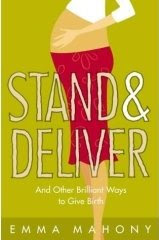 This weeks book - part of the collection courtesy of the Amazon delivery man - is Stand and Delivery. It's a humorous and insightful collection of useful and positive stories compiled by British journalist, Emma Mahoney. I love this book. Up until now, I've found that most books are far to medical and full of scare tactics. I'm really not worried or scared about childbirth. I'm more worried about the fact that I'm not worried. Actually I'm really looking forward to it. Does that make me strange?
Posted by Debs M-C at 15:03

Please keep blogging!! It's so fun reading how things are going. I think you're doing great to be running 17 miles a week.

I endorse the above remarks by John, but must add that if JR thinks you need a lift then you are obviously going slower than you think!!!

Well, I'm looking forward to getting it out of me! but that is about it! it's great you are still running, no shame! and I know you didn't take the car ride, so there is nothing to be ashamed about! Great job! I wish I was looking forward to it!

You'll probably find there is one position that will suit you, and won't be the one you've decided on beforehand. Good to be familiar with a few possibilities though. The beds they provide you with are great fun and can change like a transformer into lots of different shapes and configurations. Marco will have fun twiddling with the controls I suspect.

But don't feel pressured into the name change - there's no legal need. My wife kept her name, Davies. Yes it does seem to confuse people as there seems to be a widespread, largely unconscious belief that marriage legally must require both partners to have the same name. Not the case, and she just felt it'd be odd to stop being called what she has always been called. Now if you prefer Consani to Martin, that's a different story ...

Or, just to wind Marco up, why don't you all go for a name change to the double barreled M-C? That'd be nice and equitable. :-)