As previously stated, the Montane Lakeland 100 is one of my key races for 2013.  As frequently stated, navigation is not my forte, so full a course recce is required ahead of the race on July 26.

Although the course is only a few hours drive away from Glasgow, the recce runs involve meticulous planning.  The GM and I had pencilled in this date a few weeks ago.  After our first recce run, which involved hours of freezing cold wind and rain we vowed only to return on days when the conditions were favourable.  Unfortunately, we don't often have the opportunity to be choosy.  Windows and all that.  Although the forecast wasn't exactly horrendous - I did my usual and searched the sites until I found one I liked -  the risk of snow and ice were high.  And as the week went on, fog and mist appeared.  Although, no wind.  The latter was the positive mantra for the day trip..."...at least there's no wind".

An early start had us arrive in Ambleside before 8am.  I'd booked a taxi to take us to Dalemain, with the view to running back to Ambleside.  Simple?

As the taxi left Ambleside and started to climb over Kirkstone Pass into what can only be described Narnia, I'm pretty sure I could hear my heartbeat.  There have been so many horror stories from Scottish mountains this winter, I was a little nervous.  I don't make secrets of the fact that I'm a bit of jessie on snow and ice.  It doesn't stop me running, it just makes me whine more.

After paying the £55 taxi fare for the 19 miles journey - what is it with steep taxi tariffs in the Lake District? - we were at Dalemain House

Before the Kevin the taxi driver had even got into third gear, we got lost.  I kid you not, it took us the best part of a 40 minutes to cover one mile.  And it wasn't even one mile in the right direction.  We were running back and forward across fields, basically reading too much into the course instructions.  Thank goodness the GM saved the day by retrieving her trusty (in that it's always part of her race kit, but never been used) compass from her backpack.  I know, I know.  I'm laughing as I type this.  We were then huddled over said compass, turning around in circles trying to work out whether it was the red pin or the white pin we should be following

It gets better. I then brought out my new (also never been used before) Garmin e-trex 10 and turned on the compass.  Obviously Sonic had uploaded the GPX files to it. Result.  Something we could trust.  We jogged across the field in the correct SSW direction, with a hoity GM muttering: "Well I trust my compass too".

We found the stone stile we had searched for and we were off.  Across water-logged fields.  All the standing about meant our feet were like ice-blocks. We trotted along in single file on the faint path.  Next thing the GM was by my side, squealing expletives.  I turned to find we were being set on by a flock of sheep.  I've never seen anything like it. Cumbrian sheep are certainly more hardy than their highland counterparts.

It was pretty much plain sailing all the way to Pooley Bridge and en route Howtown.  Clutching our laminated sheets, we felt invincible having conquered about five miles without any mishaps.  We were then joined by Alex, a young chap who was doing a recce the course ahead of his first ultra at the Lakeland 50.  He was armed with only an OS map, so knew his navigational knowledge was infinitely better than ours.  We chatted for a bit, before I told him to push on and we would see him on his way back.

We arrived in Howtown - although the "town" part is quite misleading.  It's more of a clutter of houses with expensive cars.  We went down to suss out the checkpoint area and then started the ascent over to Mardale Head.

After watching JK's videos, this is the section I was most nervous about.  Words like "open fells" fill me with fear.  I was quite comforting to see Alex's red shirt in the distance.  To be honest the section wasn't as daunting as I thought.  The path, although faint, through Fusedale Valley was fairly obvious, but the further we went up the foggy it become and the thicker the snow got.  We were then just blindly following Alex's steps in the snow.  The GM was dragging her cautious heels  a bit, but I was a little more confident that we would be fine when we got over the hill top.  But we were just heading into a total white out and the snow was getting thicker.  There was no sign of any path - or even of any other hills.  With no trajectory, we didn't really know where we were or where we were going.

In hindsight I guess it was a little  foolish putting trust in a stranger's footsteps on the basis that he had a beard and was reading the route from a map. 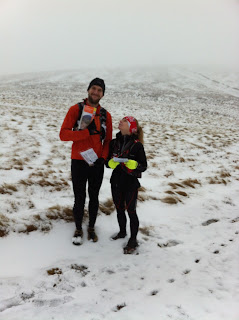 Bizarrely, it was lovely up on the hill top "...at least there was no wind". I don't think I've ever been up that high for it to be so still and peaceful. In Scotland, we would have been on your knees battling with the elements.   It would have been glorious, if it wasn't for the fact my feet were turning ice.


A couple appeared on the left and then we spotted a wandering Alex, who was retracing his steps. It turned out that Alex's map didn't have the course marked out on it, so he was lost too. Doh! He was quite amused that we had followed his steps.

After asking the couple for directions, we headed on. Unconvinced.  I took out my e-trex and the course map (yes, I had one of those too) and was impressed that I could pinpoint where we were.  That was it though. No idea where to go.  Not even which direction to go in.  We were standing debating which way to go.  Alex saying west and we saying east.  Another couple came along and told us to go even higher to take a shortcut down into Ullswater. All conflicting, which didn't help the situation.

After spending the best part of a hour on the hilltop, my feet were frozen solid but "...but at least there's no wind". It was then after 1pm and hours of daylight left were diminishing. Alex made the decision to head back (he was doing an out and back anyway) and generously offered to give us a lift back to Ambleside.  More because we had become a liability, and less to do with civic duty.

It's amazing that it such a short time - with a rapid descent - not only do the visuals and surroundings better clearer but you have more metal clarify too. 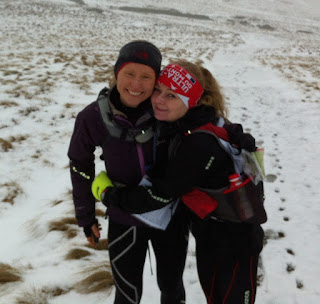 So we retraced our steps to Pooley Bridge, where Alex kindly gave us a lift back.

Even despite the obvious dissappointment, I had a great day out. Not quite the day I had planned, but it was a blast. We had a right good laugh.
...Then the GM and I spent the whole journey home trying to justify our decision to quit.  We both knew we made the right choice, by my lord we do chastise ourselves for it.  No worries though, as we will just need to go back next month and try it again.  That give me time to learn how to use the e-trex
_____________________

Other another note, it was second outing with my snazzy new Dirty Girl Gaiters on.  I must say, I'm a little bit in love with then.  I don't really like anything tight around my ankles - I always wear no-show socks for that reason - but they are very comfortable and really do stop all the nasty grit and debirs getting in your shoes.  Now I just need the collection to match my outfits :-)

Please, please, please can I come and watch you on your next recce?
I wont comment or get in the way - I just want to witness this soap opera at first hand.
Map and compass are not dirty words!

Can I come and watch too??

You certainly seem to be picking the days to go. Dave & I did 4 recce runs and everyone of them were in glorious sunshine .... well except for the first one when we started in snow!!

Oh how I love your blog posts! Hopefully it will be third time lucky for the weather...and the taxi fare. X

Probably as well you turned back, Mardale is not quite the metropolis that Howtown is! I found when doing L100 reccies that the local buses were fine for getting to the start; free for an old man like me but I think not too expensive anyway. Keep at it, the days are getting longer now!

Sounds like real adventurous stuff.What type of back-pack do you use for long days/races?

Bit late in adding my tuppenceworth; but probably better late than never. What you say about this outing reminded me of your nightmare winter snowfest jaunt from Balmaha to Drymen via Conic Hill 2 or 3 years ago. I reckon you should re-read your write-up on that to remind yourself how scary it was.

And how about going on a navigation course? It is all very well not having a clue where you are in the hills, and laughing about it afterwards when you get back down. But what if something goes very wrong, and you don't get down. Period. Not such a laughing matter then for family and friends. Scottish Hill Runners are doing a navigation course for hill runners on 6/7 April, in the Pentlands, lead by "15 Munro Rounds" Steven Fallon. Or Sonic may be able to teach you..... MtM

I'm with anonymous here. Perhaps it is just your style of story telling, but it comes across to me as if you are going into the hills, in winter, without a clue how to navigate. If true this is way beyond mildly silly and well into the "accident waiting to happen" category. The navigation course above sounds like a very good idea.

Apologies if this sounds harsh, or if I've misinterpreted the situation.