I'm not sure if I've mentioned it before, but I've signed up for the Montane Lakeland 100 in July 2013.  I will have mentioned before that I have zero navigational skills and a like to recce courses that require such skills.  One less (major) thing to worry about on race day.  Plus, I think if you get lost in a ultra race, you've only got yourself to blame. 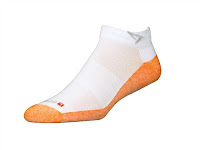 My lovely sponsor the ULTRAmarathonRunningStore.com sent me a pair of Drymax Maximum Protection Running socks to try, so I thought I'd put them to a proper test and saved them for my first Lakeland 100 training run.  As you will see from the before and after pictures, I certainly put them through the wringer!  See below for the science bit and my thoughts.

Lakeland 100 training Episode one:  The GM an I were going to join the organised recce run that was planned for Saturday afternoon.  I would have liked to have met up for fellow race runners, but we decided against because 1) The main priority of the trip was to learn the route 2) I would have blindly followed the runners in front, therefore not concentrating on the track 3) The organised run was leaving later in the afternoon, with the aim of giving runners experience of night running  4) So, we would need to go back and run the sections in daylight 5) If you're running in the dark, you could be anywhere and I wanted to experience the views 6) With a fairly lengthy journey either side of the run, it would be midnight by the time we got home. All reasons to go at it alone. 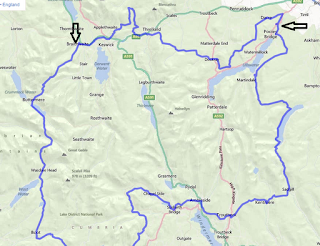 After much debating, we decided on the sections from Braithwaite to Dalemain.  Estimated mileage 26.  Our total mileage? 29. Of course there was always going to be a few detours. We left Glasgow at 6am and arrived at Dalemain House just before 8am and took a taxi back the 19 road miles to Braithwaite. The biggest shocker of the day was the £60 taxi fare! But hey, we were at the start of the section and we HAD to run the course to get back to the car.  We packed emergency taxi money just in case though!

I did carry a map, but to be honest if could have been a map for the Inca Trail for all I knew.  Thankfully, the route descriptions - the step-by-step guide - which are downloadable from the race website are top-notch.   Prior to the trip I watched JK's Lakeland videos, which I must say were invaluable.  Not for directions, but for reassurance we were on the right route.  Although I was fairly disappointed not to see the caretaker from Dave's school ;-)

The weather forecast was for heavy rain - all day - and it did not disappoint. It tipped.  And after a few hours the initial euphoria wore off and we were left soaking and shivering.  My hands wouldn't work, my brain became defunct and we became pretty lackadaisical about following the route description.
﻿﻿
On the last section - from Dockray to Dalemain - we saw the sign for Gowbarrow Fell.  Recalling the name from the route sheets we started stomping up the steep hill.  It's funny how when you're not quite sure that you're going in the right direction, you look for signs to make things fit.  Like a kid trying to squeeze together jigsaw pieces.  It just didn't seem right.  And when I saw the Cairn at the top, I knew it was just a hill walk, not part of the route.

Of couse backtracking on the description, it clearly states: "AVOID left permissive path to Gowbarrow Fell". Lesson learned.  Although best make mistakes on a training run, and not in the race.

Back down the hill and back on track.  Thankfully the route took us through some gorgeous woods and contoured around Gowbarrow with the most amazing views over Ullswater - which certainly lightened the mood. It's truly magical.  Even in the rain and mist.  I think the backdrop, coupled with recognising the (reassuring) points from JK's videos - certainly perked us up a bit. When we hit the old ruins and made the required right turn, I ran down to Swinburn’s Park with the same excitement as my number being called in Argos. I never thought simply going to the right way could feel so amazing!


The adventure wasn't quite over though, as we had to negotiate a few shoe-sucking muddy fields and then got lost in Dacre trying to find the route passed the castle.

Eventually we made it back to Dalemain House in a total time of 5:48.  That wasn't too bad considering we had to follow a map into the unknown and take a few detours. I absolutely loved the route and even now, I'm still on a bit of a high from the run.

I think it took us longer to get changed into dry clothes that it did to drive back to Glasgow. I'm sure the passing tradesmen were slightly suspicious of steamed-up Mini in an empty carpark with wet clothes being disgarded out the windows and doors!
...NOW MORE ABOUT THE SOCKS...

I'll be honest, I not sure I would fork out £22 for a pair of socks.  It's right up there with £60 taxi fares!  However I do think - with most things in life - you get what you pay for.   I've made no secret that my feet have been causing me problems this year.  There's not been a race where my feet haven't let me down, so I'm willing to try anything.  Any pay anything! 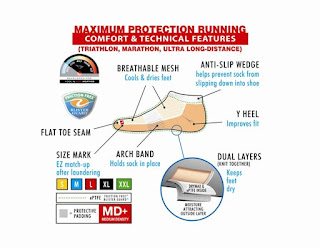 Here's the science bit...Maximum Protection Running socks are made using the patented Blister Guard® system. This system incorporates Friction Free® Profilen® fibers throughout the entire foot area of the sock. Profilen’s chemical name is Polytetrafluoroethylene (PTFE). PTFE has the lowest Coefficient of Friction of any solid material.

That was as clear as mud to me too.  Just skip the rest and watch the video at the bottom.
Why we get blisters: Feet get hot and perspire, causing socks to become wet. Moisture significantly increases friction (stickiness) between socks and skin. The higher the friction, the greater the chance of getting blisters. Higher friction limits skin surface movement, yet still allows inner tissue movement causing a shearing effect. This physically separates the two layers which fill with fluid, forming a blister.


Their Blister Guard® System:  Drymax Maximum Protection Running socks were designed to prevent blisters during triathlons, marathons and ultra-long distance runs. In addition, they will help people who are just prone to getting blisters.   Profilen and Drymax fibers blended together provide Maximum Protection for your feet. This scientific approach keeps feet dry and the friction between the skin and sock low. Runners who wear Maximum Protection Running socks will have cooler, drier, more comfortable feet, while significantly lowering the chance of getting blisters. They possess top mesh air panels which release heat and sweat vapor out of the top of the sock and shoe.

The proof  of the pudding...After nearly six hours in the pouring rain, I can report that my feet were comfortable the whole day.  No hot spots and no blisters.  So yeah, you get what you pay for.
Posted by Debs M-C at 08:15

Awesome training run! Well done! Drymax are great but not readily available here in South Africa. With the exchange rate I can't afford them but wish I could.

yay! glad to hear you're in..even though a bit mad too ;) (im sticking with the 50 again)
its a beautiful course (im biased) and goes without saying that the hardest bits nav wise will be on the first night of darkness and then beyond langdale but im sure it'll be a breeze for you.
having done the 50 route x times i reckon you could blindfold me (famous last words)

I ran Tooting back in 2010 in Drymax socks - not a single blister! I swear by them.
Hope you enjoyed your trip to the Lakes x
Vicky

You should have popped in - girls rugby on a Friday morning!!!!

Sounds as though you had a fun time!!

Glad the videos were helpful.

I'm getting some of them socks. Then I'm gonna hide 'em from Charly who seems to collect most of my socks in her room after wearing them and slinging them in the corner.

Good to see you're giving the L100 a go, see you there. Navigation is no big deal, just get Wasdale to Braithwaite and the last three miles in your head, the rest is easy.

you'll in fact accompany the classic crew length sock, but usually, runners tend to stay with the shortest sock possible. Most runners feel this is often the foremost comfortable sort of sock for an honest run, for more information visit here eaglesocks.com.