The Gibbering Midget and I decided to get in a long run (35-40 miles) before the winter set in. I'm not sure why, to be honest. Even when we were firming up plans last week, neither of us could think of a logical reason as to why we were doing it, or who's daft idea it was in the first place. Although the smart man's money is on it being mine. I think it stems from last year's month-long ice rink leading to no speed or long runs and then having to crank up the miles from January to run the 100K in March. This year, I'd like to keep ticking over. I'm not even convincing myself here...

Anyway we're not sensible enough to back down, so plans were made. We were to start at mine in Glasgow, head over to Balloch, then on to the West Highland Way to Milngavie and back to the start. A nice 37 miles circuit, with a bit of everything - roads, hills and trail. On paper, perfect. Although it's all runable so it's pretty unrelentless at points. 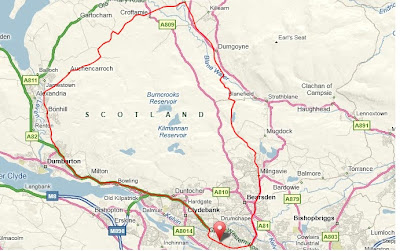 Of course, it was pitch black when we started at 7am on Saturday morning. We toyed with the idea of taking the canal path to Dumbarton - which would involve headtorches - but I wasn't entirely comfortable with the idea, so we decided to grin and bare the pavement alongside the street-lit dual carriageway of the A82. At least I thought we had made the decision. It later transpires that the GM had two buffs over her ears and had no idea what I was asking her and just nodded in agreement!

The first 10 miles were character building to say the least. It was dark and sub zero with a ice cold wind. And then the sleety rain started. Add in dirty spray from the passing lorries and buses and it was a a brutal experience. My legs were so wet and frozen, they could barely move. It was really just heads down and move forward for about 90 minutes. Thankfully, in our heads, we knew this was always going to be the nastiest part. It's a grim prospect even on the nicest of days.

After huddling in a bus shelter to refuel, we headed over the Balloch horseshoe to Croftamie. In true Scottish weather style, the sun came out revealing breathtaking views over to the snow-capped Ben Lomond. And then, of course, the grey clouds appeared and it p*ssed of rain again.

When we hit the West Highland Way, I was starting to wilt. I can't quite put my finger on it as to how I felt. It wasn't fatigue, fuelling issues or muscle pain, I just felt flat. I've felt the same for a few weeks. Just flat.

Wading through ankle deep ice cold water for a few miles didn't really help either. It was completely flooded around Beech Trees. And there was no point pussyfooting around the edges, as wet feet were inevitable. 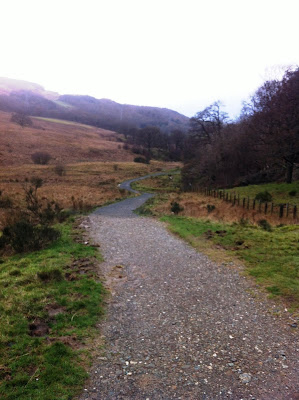 For fellow WHW runers who haven't been on the Way for a while - like me! - then there's been some resurfacing around the bottom of Dumgoyach. That's the nasty muddy bit between Carbeth and Beech Trees. And there a new lane which bypasses the farm. The WHW is turning into a cycle path and I'm not sure I like it. The mental gates were bad enough. Anyway, I bet Rosie Bell wishes this was done last year, as she wouldn't have lost her kneecap during the Fling. Still officially the worst running injury/accident I've ever seen. 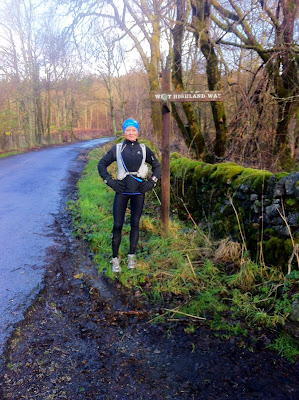 After the magical powers of a Red Bull shot at Carbeth Huts, I started to perk up for the last four miles on trail. Believe it or not, we were actually blinded by the sun heading through Mugdock Park.

Then we stopped at Milngavie for some Coke before heading on the five miles home. We were still in really good spirits and just as things were looking up for the final stint, the hailstones started. Remember how I said the route had a bit of everything...? Road, trail, hills, wind, rain, sleet, hail, floods, sunshine and rainbows.

My Sunday run for the Marcothon was rusty to say the least. I managed a spaced-out 3.5 miles and that's only because I misjudge the distance of the route. Now that we have the snow and ice here, I'm glad I got that long run in after all.

Congratulations to everyone who got a place in the West Highland Way Race. I feel a bit like Cinderella not going to the ball, but I'm really looking forward to trying something new. Plus, even if I never did it again, I'll always be pleased with my time from this year. I'll be there for the race though - Sonic's on back-up payback time!
Posted by Debs M-C at 08:30

Just you be careful of burn out. That was a heavy year last year. Well done none the less - I'm sure it felt all the sweeter for being a bit chicken pox cooped up!

character building, except you dont need it! Well done x