The end of the Marcothon is nigh. I can't believe we're on day 22 already. Apart from a couple of hangover torture miles, there's been a limited amount of whining from me. Well, in my humble opinion. In fact, compared to last year, it's been relatively easy. Even the hurricane didn't faze me. I did, however, consider dusting off the treadmill in the garage, but thought it would be less painful to take my chances with the Bawbag. The police car that tailed me for about a mile of said run was probably a sign that I should have got the duster out. Or the flattened coke can that flew at me like a frisbee. Thankfully my ninja-like skills saved me from death by coke can decapitation.

After the hurricane, we had ice. Then a big dump of snow, which eventually turned to ice. Last weekend brought glorious winter sunshine and now we have rain. I'm pretty sure we could change the Marcothon to some kind of multi-activity event or a Decathlon. 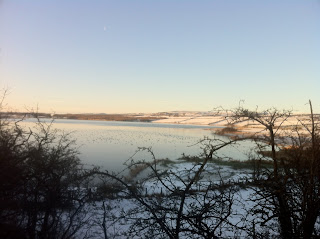 The photo was taken on Sunday down Ayrshire way on my last run with the GM for 2011. It was a glorious day, so crisp and clear. Very icy though, so the kahtoolas came in really handy. Tomorrow, I drop the GM off at the airport so she can fly to sunny climates for a romantic festive holiday in South Africa. Jealous much? She's so psyched, she could probably fly there herself.

The support on Facebook continues to be overwhelming. People who have signed away 31 consecutive days and run the risk of falling out with their spouses/partners/families on Christmas day and they probably don't know where the event name came from. Incidentally it's an abbreviation of Martin-Consani:-) Obviously I'm joking, but it's clever, he? ;-) Some folks might even think it's a memorial race!

We've also had another wee bit of publicity. Ruth Walker from the Scotland on Sunday is an enthusiastic recruit. Click on image right.

We had a kind invitation from one of the organisers of the parkrun in Falkirk to attend their 5k on New Year's Eve which went something like... "I know you have probably had many requests for what I am about to ask, but here goes..."... ha ha you wouldn't believe how many requests we've had... That's poetic license by the way, Dave. So we've decided to make this the grand finale and have tried to encourage as many Marcothoners along as possible. Given the logistics, it seems to be the most central. Well, for those living in Scotland.

Hope you all have a fabulous Christmas.

Here's a special sing out from Cairn and Lucy. Yes, there's no end to the talents of the world's bronze medal holder. And when I picked her up en route to the party, she appeared with a homemade Christmas cake too.

Only the Scots would name a hurricane "Bawbag!" Unusually mild December here; I should have no trouble running every day.

God bless the poet ;-) See you next week in lycra.xx

Great video ... Have a great Christmas!

The Jimmi Henshite Experiences said...
This comment has been removed by the author.
24 December 2011 at 01:04

That is the best music video I have seen in years :-)