Last week, I felt rough. Really rough. I was almost tempted to throw a sickie for the first time in my 11 career in newspapers. Apparently this is a good thing when you're tapering, but I'm not sure why. Thankfully on Friday I had a day to rest and chill out in front of the TV to watch the Royal Wedding. This banner - spotted in the crowd - was quite apt.

I think it's safe to say that when two names: Kate Jenkins or Lucy Colquhoun appear on a starting list, it's a given who is going to win. Even fresh from a ridiculously swift time at the London Marathon a couple of weeks ago, Kate was still on top form.

I was pretty nervous before the race. I'm not sure why as, like many others think, the race is more of a means to an end. A tuner for the West Highland Way race in June.

The day was forecast to be unseasonably hot and unfortunately it didn't disappoint. Thankfully the gals and the ol' boys are allocated the 6am kick-off spot. The early rise was a small sacrifice for starting in cooler conditions.

As per my previous post, I was following splits devised by Sonic. My aim was to focus on the pace for the first section (12 miles to Drymen) and then just wing it from there - in the hope that I wouldn't burst too early.

So when the gun went off (or maybe someone shouted ready-steady-go, I don't remember) I tried to zone out and keep a steady/slow average pace. Last year, in all ultras, I got too worked up about who was around me. I continuously reminded myself that I can only control my outcome, not the outcome of others (I'll save my bedtime reading for another post). It wasn't quite a mantra, just something I kept at the forefront of my mind. 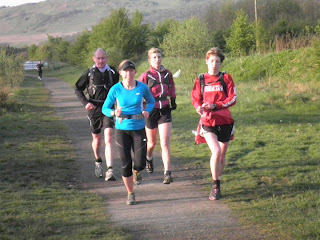 En route to Drymen - on a fresh, dewy morning - I chatted to quite a few runners: JK, Jane (who had also run the 100K last month), Elaine, Helen, Ian, Malcolm and John Kennedy - who in the photo below has just commented on my big butt :-) 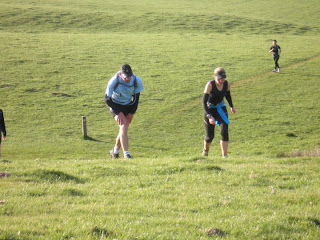 I think I might have been 11th gal (or thereabouts) at Drymen, but still bursting with energy. OK, I was a minute ahead of schedule, but that wasn't a big drama. Ssshh don't tell Sonic, but I had to faff about in the last mile to slow down my average pace :-)

I headed out of Drymen with Jane, Helen and John Kennedy and eventually caught up with the Gibbering Midget, who looked like she'd lost heart. It's a long way too go if you don't have the drive and have been dealing with illness for the previous month. The group split up and I stomped up Conic Hill and took it easy on the descent. Later in the day, I head the GM had taken a tumble and that was the final straw. Sonic and Cairn (who I hadn't even seen that morning) were waiting at the bottom. I picked up a few supplies and moved on swiftly. 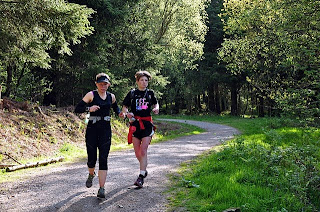 The section from Balmaha to Rowardennan was really tough for me last year, courtesy of the overzealous. This year, I really enjoyed it and picked off a few runners in the process, who I guess were cursing their overzealous start.

I meet Sonic and Cairn about a mile from Rowardennan. Sonic had informed me that JK was about 20 seconds in front of me. But later JK informed me that Sonic had told him I was 5/10 minutes behind. I think somewhere in the middle lies the truth :-)Anyway when I arrived in Rowardennan, JK was perched up on a rock enjoying a snack. In his blog, JK mentioned that I barked at him for sitting about having a picnic, but I kid you not, he was lounging about like Huckleberry Finn. 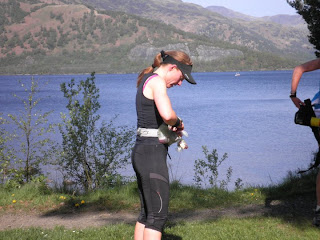 I picked-up, topped-up and moved on up. You get the drift here. I'd rather walk, than stop at checkpoints. Within minutes JK and Claire has caught up and it was nice to run and chat with them for about five miles. Claire - who is a hardcore Ironman - was running her first ultra, just weeks from finishing London in 3:03. With a 10K PB of 35, she's certainly no fairy. Like JK, she was also from Liverpool. Also an Everton fan. And also teetotal. I know, the world's only teetotal Scousers. Who would have thought :-)

Although it's notoriously tough and fairly technical, the lochside is my favourite section. I like all the skipping and hopping. It wasn't a conscious effort to push on but I left Claire and JK about a mile before Inversnaid. To be honest, I thought they weren't far behind and would catch up. I passed another girl before arriving in Inversnaid.

You got it, I was in an out in a flash and overtook another two guys within the first mile. More hopping and climbing and I reached the top of the loch unscathed. There were a lot of walkers and I got lots of cheers and claps, which really perked me up. On the hill up towards Dario's post, the air was so still and the heat was quite overpowering. I said a wee hello to our absent friend and then - as if by magic - a lovely cool breeze enveloped me.

Heading towards the fence before Beinglas is when the first vet male runner (on the 7am start time) passed me. Given the rate he was going at and where he passed me, he might have been better in the elite male start at 8am.

At this point, my quads were starting to spasm. I've never really suffered from cramp before, until my calves did the same thing in the 100K. I wasn't really sweating, but I knew my face was in danger of exploding. I go a rare shade of purple when I overheat.

I took the steep descent into Beinglas Farm fairly easy as cramping quads is not something I ever want to experience.

Sonic wasn't on support duty for the day (the drop bag system is too slick not to use) but I'd asked him to be in Beinglas, as I'd packed for all eventualities. As I was running towards the checkpoint, I could hear rapidly approaching footsteps behind and knew instinctively that they belonged to Sonic. He picked up my bag and tried to undo the knot - slowly! After I spat the dummy, a Marshall came over and grabbed it off him to control public domestic. Later I did apologise to Sonic for my outburst, although I've since remembered he nearly took my out throwing his bumbag at me at the D33. Mmmm. I suppose the key to support is to take things with a pinch of salt. 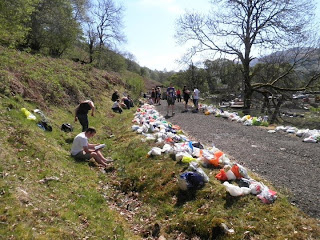 I wasn't really sure of position until it was confirmed as I left Beinglas that I was second place.

I still felt good, but I was (surprise, surprise!) struggling to eat. I was, however, drinking a shed load of Lucozade and Coke. But as the section started to get hotter, all wanted was water. And the mix of gas and sugar was having an unladylike effect on my stomach. I'll spare you the graphics, as you know I don't do toilet chat, but there was quite a few emergency stops.

The lead runner, Andrew James, passed me on the steep hill just before Carmyle Cottage. I was doubled-over and watching in awe as he literally bounded up the hill. He was certainly a man on a mission. And his mission, in the form of record-holder Jez Bragg, followed in close suit. The men's race was always going to be exciting, but I would have expected to see "Our Jez" in pole position by then.

On the way up to Crianlarich I had a great view of the chase. But I also had a great view to see if someone was chasing me. I wasn't really concerned about my finishing time, just maintaining my position. And with the WHWR only seven weeks away, I couldn't afford to be buckled.

Although I played a better race card, it certainly wasn't perfect. When you factor in a 100K race, a toasty day and a dollop of complacency, I took too many breaks (and emergency stops!) in the last section. I suppose in hindsight you can always work harder, can't you? But I'm glad I didn't rip the ass out of it, as I've been back training no problem this week. Actually on Sunday I spent the day gardening and dismantling a kitchen. 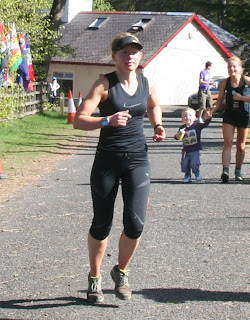 Given the dry conditions, I was amazed at the number of runners who finished with bloody knees and elbows. Is there anyone who didn't fall? The worst I saw was Rosie Bell, who practically took her kneecap off very early on in the race. Given that I can barely walk along with street without falling over these days, I was amazed I stayed upright until Crianlarich. I'm now black and blue, but I must have been so wasted that I didn't feel at thing. Maybe it was the shock of falling hands-first, elbow-deep in a large puddle of cow piss!! 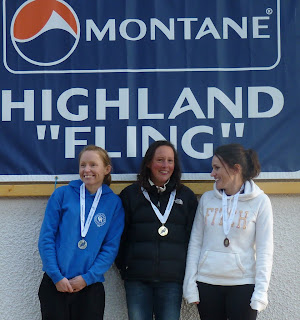 One day: Four medals. A finisher medal, silver for both the UKA and Scottish Ultra Champs and bronze for the club. All in a day's work. 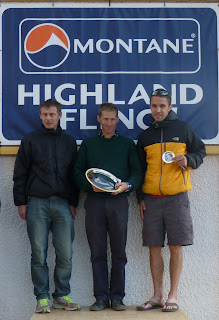 Thanks to Murdo and crew, Sonic and Cairn, the amazing stewards, everyone who put up with me on the day and the pictures (pinched from Davie, Muriel and Jude)
Posted by Debs M-C at 08:37

Great run and nice report, but you look far too unstressed at the finish!

Well done on a great race, Debs! But hoping I didn't scare Cairn at the end of mine (let rip with a kind of power scream and 10mph+ 'sprint' on spying the finishing arch just as Marco and Cairn appeared walking towards me... and thought I saw Cairn fall over as I passed)? So, if I did... sorry, Cairn, it wasn't aimed at you! :-)

Top one Debs .. Reckon I could have fallen over at least 10 times. Not sure how I stayed upright.. You are looking good for June !

That's my girl! Great report, now we're ready for the big one

What a superb run Debs and another highly entertaining report. Don't every stop writing up your races. They are priceless.

I can report that I didn't fall over! but maybe that's because I wasn't running as well as you.

Recover well and I look forward to renewing our battle at the whw but tbh I think the only time I'll see you is at the start.

Congrats again on another great run.

I can't wait to see what you will do on the whw this year.

I'm way way behind the times here but well done on a fantastic time. Hope you have recovered quickly. See you soon. Caroline x