As the month of May is nearly behind us, this is a quick summary...

I was fairly pleased at how quickly I recovered from the Fling. I even managed a PB at the Women's 10K the weekend after and finished 119th out of over 10,000 finishers. Which probably says more about the runners (eh, walkers) than my athletic ability. I agree that is wasn't the best recovery strategy, but the race is really special to me. It's the reason I started running in the first place. My ninth in a row, so I would have crawled round on my hands and knees if required. Thankfully there was still a little bit of zip in the ol' pins. And that's my annual 10K over with for another year. Way too much like hard work for me. 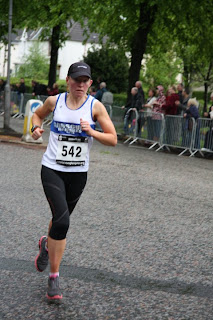 The piece de resistence of West Highland Way training was centred around a two-day run, covering the 72 miles (of the 95 route) to Kingshouse. Milngavie to Beinglas on the Wednesday (41 miles) and Beinglas to Kingshouse (31) on Thursday. Sometimes the logistics of a point-to-point routes are more taxing than the actually running itself. This year I booked good ol' Citylink bus back each day, which worked out brilliantly. The downside is being restricted to specific timing as the Citylink service is a pretty irregular service - from Kingshouse there was a bus at 2.30pm and 7.30pm - and standing about chittering waiting on a non-punctual bus service.

Originally I planned the week off work, but a major project launch put a swift kick to that. I try to be as disciplined as possible when it comes to training (when the body's willing) so I just had to work round it. Which meant five days off became two, I had to carry two phones, stop for regular email/phone breaks and work in the evening. But hey ho, it meant I could get out on a trails for two days, so it was worth it.

The Gibbering Midget had also taken two days off. I train so much on my own these days, that it really makes you appreciate some buddy support. The miles always tick by. Plus, we pretty much done all our long together, so we're in sync. There's the unspoken way we know when to pick up the pace, knock it back, walk the hills and start again. And regardless of how many times we tell each other we're going to take it easy, it's always eyeballs and elbows out for the last mile.

Both days just flew in and were really enjoyable. The weather could have been kinder, but it could have been a whole lot worse. In true Scottish style, we were hit with all conditions. Head down driving rain and wow-wee-check-out-the-view blue skies. Unfortunately our feet were sodding wet for most of it. I think my feet practically came off with my socks. Oh well, my summer sandals have been redundant for a few years now. 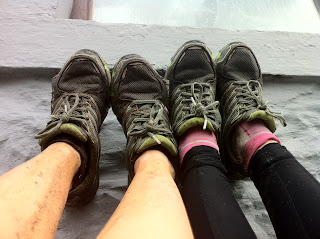 The plus-side was my legs felt fairly good at the end of it all. Much better than they were after the two days last year. I was kinda wishing we could have done the final sections on the Friday. But when I was watching the hail stones pelt off the streets from the comfort of my office, I got over that quite quickly.

The glorious weather continued into the club's annual training weekend at the Trossach's Tryst in Callander. This year Coach Lesley joined us, so there was more training and less partying involved. As I'd done my longs on Wednesday and Thursday and Sonic was running on Friday and Saturday (see what I mean about having to be disciplined), I intended on doing a few leisurely jogs, but mostly spending some QT with my boy. Last year the weather was glorious - actually too hot - and we went on nice walks, ate ice-cream, went to the park and splashed about in the Loch. This year we had bouncing rain, so we were pretty much housebound and stuck watching reruns of Toy Story. My three mile run on Saturday evening turned into seven miles, in a vain attempt to ward off the cabin fever.

On Sunday morning I ran the 12 miles from Callander to Aberfoyle on the number seven cycle track. About five miles of it is all up hill, but it's worth the puff as it's a glorious route. Lots of wow-wee moments. The terrain is just perfect to consistent running and working hard. And as I'd started early I had the place to myself. The other guys started later and went in the opposite direction. I think I took the easier option :-) At least I had a warm-up 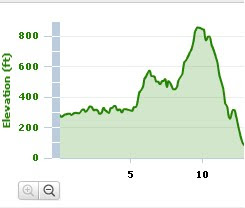 Anyway, now I'm off to meet the GM to run from Kingshouse to Fort William. Last piece of the puzzle.
Posted by Debs M-C at 07:03

Great catch-up with your training! I hope you both have a great race this year! Fingers crossed everything goes to plan. BTW even I came in 281st out of 10.000 runners! So it really is rather skewed. :-) Silke

Completely know what you mean about a lot of training on your own and the discipline thing. Al and I sit down each week and bagsy our time slots!!! LOL!

Glad your long run back to back went well. Taper time again soon.

Aah, that makes sense now. I was sure I had seen one of your cars at Beinglas on the Thursday but couldn't work out how that could have been the case. What a cracking May Debs - you're looking in great shape for 3 weeks time, I'm looking forward to welcoming you to FW! Ian

Hope you had a good day today.

What did you think of the Forest that is no more above FW?