Last weekend saw the start of the three week taper. And the end of the bargain Citylink bus tickets. Being from a rival newspaper, it pains me to say the Daily Record struck gold with their £2 ticket deal.

Saturday, the GM and I finished the last piece of the WHW puzzle, by running from Kingshouse to Fort William. We drove up to Kingshouse, ran the 23.5 miles to Fort William and got the bus back. Simples? Not quite.

I don't want to wibber on about the weather (again!) but anyone who's been on the Scottish hills, knows it can make or break your day. On Saturday, it did both. Intermittent is a good word to describe it. Flipping from icy cold rain to glorious sunshine. But always with a strong head wind. Character building I'd say.

When we left Kingshouse, the driving rain would strip the fake tan off you ;-) There were lots of walkers huddled waiting to embark on their day's trek. All goretex up. You should have seen their faces when the GM rolled up in her signature pants and socks. One mile down the road - whilst being stoned to death by hail - We stopped to layer up. Then continued to run while shielding our faces, which were being battered from the left. By the time we'd reached the Devil Staircase (only a few miles away) the sun had come out and we were sheltered from the wind... and guess what?...we were nearly fainting in the heat. Only in Scotland, eh? Layers off and we settled into the run from there. 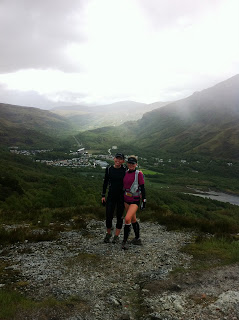 (Overlooking Kinlochleven. I really need to work on my photo posing)

After I got over the initial shock, I really enoughed the day. Sometimes, you've just got to put your head down and get on with it. The day zipped passed and we were at Lundarva in no time (well, actually, lots of time!) and in need for a full-fat Coke break.

Every run needs a bit of drama and this is when the GM lost the clip for her one-strap rucksack. After some searching we were resigned to fixing it with my hair band. I did remind her that she wouldn't have that kind of back-up if she'd chosen to run with that big guy again :-)

I really enjoy the woodland sections above Fort William (only on fresh legs, of course) so it was a bit of a shock stepping into a vast open space where all the trees had been cleared. I had seen Richie's pictures, but I couldn't work out where it was. No wonder. It looks completely different and very surreal. Quite sad too. 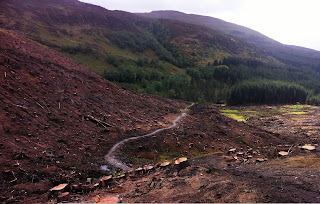 There were lots of walkers out on the Way that day. Mostly walking in the "wrong direction". You could tell it was panic training for the Caledonian Challenge. I felt like an air steward for most of the day. Good morning. Hello. Good morning. Hello. I'm glad the Caledonian Challenge is on a different day from the WHWR now. I loose social skills around 50 miles. Just ask my support team.

This was the first time this year that I'd actually run into Fort William. And it's hard to believe the next time I'll be doing it,is at the end of the race in two weeks time.

We ran straight on to Morrisons. Eager to get changed and pick up some supplies for the bus. I've decided I'm going to rename the ladies toilets in Morrisons to the Hall of Horrors. I don't think I've look at a mirror in there and not got the shock of my life.

We'd timed it quite nicely for the bus. And no Glasgow-bound Citylink bus trip would be complete without a couple of vocal chaps with Tennants tinnies. Whilst passing the mighty Munros one commented that it would be "great to get up there with a massive cargo" (that's a large supply of alcohol to non-natives). During a mobile phone conversation the other summed up the day's condition quite nicely by saying "...it was nice. Then it was shite. Then it was nice. Then it was shite". I wish the BBC would offer up this kind of straight-up weather forecast in future.

We got off the bus at Kingshouse into another hail storm. The GM started to run towards the car and I followed suit - mainly because I had the car keys. The vocal chaps on the bus must have got the last laugh watching me trying to run down the hill in full waterproofs, stiff legs and swinging a Morrisons poly bag with eight cans of Pepsi Max and that day's paper. You can't buy class.

It was a huge relief to get into the car and leave the storm behind. Even more so to get the heating on full and start heading home. The GM was certainly enjoying the comfort and sunk back and said: "couldn't you just go for a wee nap?" To which I had to reply: "Not really, sweetie. I'm driving"
Posted by Debs M-C at 08:59