The next step: Sobriety.

That's me on the final leg of the taper. I've been on the wagon since Sunday. No more sanity-saving vino until after the race. Life may seem a little uninteresting, but I suppose sobriety is ok in moderation - for a cause.

Since our last chat, I've had two cracking runs on the WHW.

Last Monday I was out with the Gibbering Midget. Kingshouse to Beinglas. We got the bus up and ran back. It was a lovely day, possibly a little on the hot side, and very busy. I always find running in the opposite directions to hikers a little disconcerting. So many eyes and not enough people to sneak up on.

The run to Bridge of Orchy was great, but I bonked on the way to Tyndrum. Not sure whether it was fuel, heat or pace, but it's quite nasty going the other way. At Tyndrum we chatted with a bloke who was walking the full distance from Landsend to John o' Groats. With all his gear. And a full charity collection box. That was my cue to TTFU. I gave him all the money I had, which forced The GM to buy my supplies of tablet and sports drink :-) Bing! After that, I was back on form. 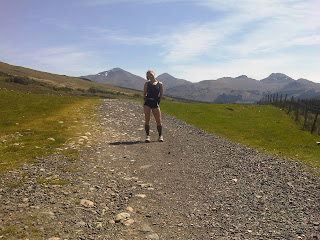 We ran, walked, chatted, stop for sheep herding (obviously) and were generally quite chipper all the way over to the A82 crossover. 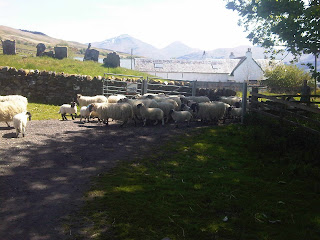 We embarked on a stomp up the steep hill, briefly chatting to the oncoming hikers. Until one unsuspecting fella said: "Should you not be running?". The GM half-jokingly tore half his ear off...and then went on about it for half an hour. Thereafter, anytime we saw hikers, she made me run up the hills. I was glad to get to the top of the Crianlarich, as I was burst. 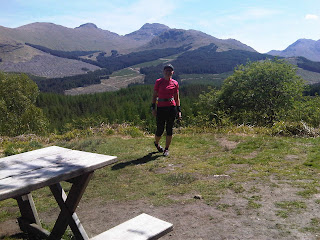 (me using the photo opp as an excuse for a breather!)

Great downhill all the way to Derrydarroch and then it was back up again. When we hit the steep ascent, I suspected the worse when I saw a group of guys lounging on the grass verge. At the incline the GM slowed to a stomp, to which I said: "Phew! I thought you were going to go for it then." She replied: "Hell no, none of them were good-looking". Fair play. Hail! Hail! The ugly boys.

Arriving at Beinglas, we stopped to buy some water (again, courtesy of the GM) and walked over to Drover's Inn. I remembered my sports therapist had been banging on about leg raises after runs, so I promptly lay at the side of the road with my feet on the fence. I encouraged a reluctant GM to do the same. Little did I know she was going to sit on nettles. So within minutes so was jumping about, squealing and yanking at her hotpants - much to the enjoyment of passing motorists.

This was the annual Garscube WHW relay race. The GM and I were doing the last leg in final preparation for next weekend's race.

It was a bit of a scorcher and I had watched the previous leg runner burst in the heat, so I was a bit nervous when it came to my turn. Did I tell you I don't cope well in heat??

The intial climb up to Lairig Mor was quite taxing - but the GM went off like a rocket. After a few miles I got into my rhythm and kept pretty much the same distance all the way to Lundarva.

I expected the Way to be packed - with hikers finishing after starting at the bank holiday - but it was empty. Only four rubbish mountain bikers that I kept passing on the ascents.

I struggled from Lundarva to the woods, as I had run out of fluids and was suffering in the heat. It was a walk/shuffle all the way until I hit the shade of the pine trees, when I got my second wind. Unfortunately this allowed the GM to really widen the gap. She finished in 2.25 and I was 2.33. I felt great and (in the words of JK)really enjoyed my run.
___________

So that's it folks. I did a wee tempo and some reps this week. Club run tonight. Possibly 10 miles at the weekend and some steps at the beginning of next week. Then it's game over. In the meantime I will continue with my sobriety. It's just a bit rubbish waking up the morning and knowing that's the best I'm going to feel all day :-)
Posted by Debs M-C at 07:26

That is one fit looking midget - run those hot pants down my way, please :¬)