Only three weeks to go, folks. I've pretty much done all I can, so now I just need to get myself mentally prepared. As Henry Ford once said: "If you think you can do a thing or think you can't do a thing, you're right". Never a truer word said.

So since we last spoke, it took me a while to get back my mojo back after the two day run. The mind was willing, but my legs told me to feck off.

We had the club "training" weekend in Callander last week. I took the conventional route and drove the 30miles with the car bursting at the seams. Sonic ran there. Go figure. 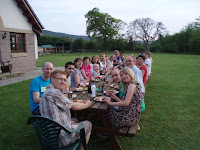 My favourite conversations of the weekend were with Ladies Captain, Irish Maz and Men's Vice Captain, Joe.

Maz, dear sweet Maz, after years of running and leading trophy-winning ladies club teams into races finally (you could actually hear the penny drop) discovered the difference between the gun time and chip time. I kid you not, she actually wondered why the official time was always slightly faster than her watch time.

But Joe? Crazy, crazy Joe. To set the scene, there's a new whippet fast French guy who has joined the club. He has one of those accents, that you're not quite sure if he's putting it on. Anyway we were discussing what a great asset he is to the club, when Joe announced that he was welcoming him by speaking French to him. "Really, Joe, you can speak French?" To which he replied in the super-enthusiastic way that only Joe does: "Yeh, really". After I asked him what he had said to him he said "Je voudrais un baggette avec jambon and fromaige". No joke, he told him he would like a ham and cheese piece. WTF? No wonder the wee guy runs so fast.

Who would want to take time out and run when there's such great entertainment. And there was the small matter of the hottest day of the year. Not being a bit fan of running and heat, it was only my conscience that got me out. A nice easy five miler along the lochside.

On Sunday I ran on the cycle route from Callander to Aberfoyle. Great track with lots of cheeky hills to warm up the lungs. It's pretty much up and up. I was looking forward to the sharp down bits, but unforuntately I took the wrong turn and Sonic had to come and pick me up off the main road. Typical, eh? What goes up, must get lost.

Things have been a bit perkier this week. Good tempo on Tuesday (ave 7:22), 400m on the grass track on Wednesday morning and eight miles easy today.

My last long run with be on Monday - Kingshouse to Beinglas (31 miles) and then it's officially taper time.

Cairn's been sorting out the support vehicle. 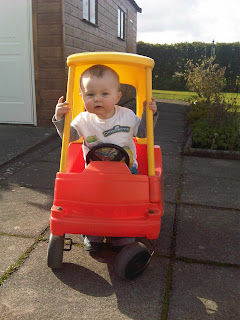 We're both on countdown and I'm not sure who is going to be more uncomfortable or who will be faster! Only 4 weeks to due date!

I'm sure you will be great on the day and that your taper will let you legs rejuvenate.

Cairn is uber cute in his wee truck!

The rules state that you need 2 drivers.. Best get a wee pal for Cairn to keep him company !!
Top effort Debs, enjoy your last long one and the taper !

Loving the Cairnmobile! Enjoy the taper, see you somewhere out there x

hahaha, Joe's French... did you hear the classic at the Clydebank 10k? "el sprinto Yohan!" as he ran down the home straight! xx