If it wasn't for the fact that Sonic is, em, quite Sonic, there could have been a massacre.

Before I delve into the delight that was Valentine's Day, I want to tell you about my first PB for 2010. I did the slightly bumpy Parkrun 5K on Saturday morning. 22:53. Five seconds slower than my Garmin time. Lord knows what I was doing faffing about at the start. Anyway, that's it, I told you. Had a bit of a battle with a Kirkie burd, but she came up trumps. Enough said.

On Sunday, to celebrate the over-commercialised joy that is St Valentine's (which I always maintain is for girls btw) Sonic has organised for Mama C to take Cairn for a few hours. He has been harping on about this route for some time. I thought organising childcare was very proactive, but in hindsight I just think he had run out of running buddies who were willing to endure the torture.

Regular readers of this blog may have noticed that I have a slight aversion to cross-country. Don't get me wrong I love going off-road and embrace a cheeky hill, but trapsing through grass and muck? I don't see the point.

I have done a smaller version of the route, which although tough, is very enjoyable. Sonic advertised the longer one as "a bit hilly and mucky, and requires fell shoes". I couldn't quite get my head round the fact it started in Duntocher, took in the Kilpatrick hills, the Whangie, WHW and back through Faifley. To me, they were practically at either ends of the country. Map navigation is not my forte.

The first few miles were cracking. A nice ascent on a rocky path. And that's were the enjoyment ended. After that I was knee deep in swamps and sheep shit. We even went stomping up a hill only to come straight back down the same way. Sonic justified this by saying "just to take in another hill" WHF? Off he went bounding across as I tissed and hissed and stumbled about. At one point I hid in the long grass to see if he noticed. If I hadn't given in and come out, I'd probably still be there.

When we finally reached the Whangie, I was promised a trail. All I got was more mud and an overwhelming sense that we were going the wrong way. Sonic pointed out a pole in the ground which "apparently" marked the race route. Really I think it was lone walker who had simply sunk into the ground and left his pole behind.

At the top of the Whangie we met a picnicking couple enjoying a lovely Valentine's Day picnic. With rolling eyes and running nose I told them "I was promised a romantic stroll".

Coming off the Whangie I then found myself running along the f-king A809 in a pair of fell racing shoes!! Then more fields, more barb wire fences, more mini-tantrums and we were on to the glorious familiar territory of the WHW. Bliss. Well, for a few miles and then more hills, fields and neds with a loose rottweiler thrown in for good measure. 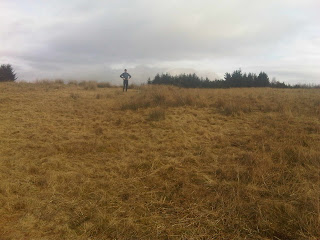 (Sonic waiting patiently at the top of the "lovely trail" - before he informed me I run across fields like a Thunderbird Puppet!)

At one point I even begged Sonic to let me run in front, because it was sole-destroying looking at his back for so long. Although, I think he was trying to avoid looking at my crabbit face. Anyway, he obliged. Well, he ran beside me but a little bit in front. What is it with boys??

The outcome: Marriage + running together = danger.

Point taken, Sonic. You can go running with the boys anytime.
Posted by Debs M-C at 19:16

Yep, that route sounds familiar. Done that. It has it all. Mud sweat and tears. And even more mud. What more do you want?
Can't wait doing it again on Sunday 6am :-)

Blimey, I feel like a member of the family with all this relationship knowledge.

Hmm, a man thing programmed to patrol and explore every corner of our territory so we have a good mental map for hunting.
Sonics nature like an occasional scratch when playing with cats;¬)

I'd have loved to have been there with my video camera!!