On Sunday, the Gibbering Midget and I were planning an out and back from Beinglas to Tyndrum. Anyone who knows us would confirm that we are a bit ditty at times. Probably too much Diamond White and Peach Schnapps (together!!) in our younger years. Coupled with my belief that my last few functioning brain cells were removed with childbirth.

Well, a few mini-dramas were guaranteed.

1) Firstly, when we arrived at Beinglas there was a big HUGE Alsatian (type) dog circling the car. I have since discovered it is a "friendly big dug" but I swear it was eyeing us up for breakfast. I've got more meat on my bones, so I would have been first. The super-svelte Gibbering Midget would have been merely post-breakfast dental floss. After (what seemed like) an eternity of willing it to go away, we decided to drive on and start the run at Derrydarroch Farm. I kid you not, the dog was nudging the door handle of the car with its nose.

2) After our first run-in with the local wildlife, we were then faced with the beasts at Coo Poo Junction. The Gibbering Midget is much braver in these situations, but I was terrified. She did try to comfort me by saying "It doesn't matter how irrational it seems, a fear is a fear". Given that the average weight of these monsters is 1500lb (I googled it), I hardly think it's an "irrational" fear. But if she wasn't there, I would have been back down and running along the A82. I even considered jumping the wall. Apparently they sense fear. Maybe because I was squealing like a pig and practically climbing on the Gibbering Midget's back. Once passed, I actually felt quite brave and pleased with myself.

3) After Crianlarich we hit some dodgy snow/ice patches. The GB went over on her ankle and used language that would make a drunken sailor blush. Five minutes later I did the same thing, but with only a few choice words.

4) Later, I slipped on the ice on the way back and cut my hands and bruised my knees before sliding down in the muck. The GM - the wee soul - was deeply concerned in case I had ripped my tights.

5) En route we bumped into the Happy Days clan. Karen joked about how glam The GM and I looked - right at the point when I was wiping my nose on my sleeve, whilst covered in muck and blood patches and standing in shoes full of cow sh*te. Oh the glamour. After saying our farewells, we headed down towards Beinglas only to be disgusted by the new trail improvements. Looks like a tarmac road could be guiding the way soon :-( 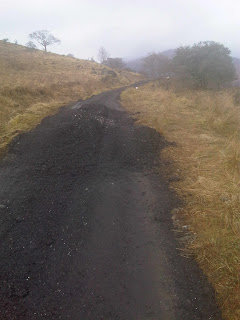 6) The GM tried to put a positive spin on our route choice by numerously referring to it as a "figure of eight" (Derrydarroch-Tyndrum-Derrydarroch-Beinglas-Derrydarrach) even when it was blatantly obvious it was two clear out and backs. And I was glad when the last 2back" was over. Heading back to the car I commented on how happy I was to have covered the 24m distance (which was way hillier than I remember)in 4.32. The GM took that moment to check the stats on her Garmin...whilst standing in the middle of the f-king A82!!

7) Not that I can comment, as driving us back home I almost crashed into the back of an indicating pick-up and then nearly took out a ned at a pedestrian crossing. OK, the light had just turned to amber, but he gave me a look and hand signal that made me want to reverse and give it another shot. Oh well, better luck next time. Although I think The Gibbering Midget will probably volunteer to drive. Tick :-)
Posted by Debs M-C at 23:13

Well done girls. A great Fling recce for your both. Yes BOTH!

My God that post made me laugh - ditzy tendencies can come my way too, so your run really struck a cord.

I have a bit of a fear of dogs and would have probably chosen your course of action too. As for the coos - I hear you, my hubby and I were terrorised by a crazy French cow on the GR5 2 years ago and with 20kg back packs on there was no quick get away.

The''good' thing about when I trained for the Fling last year, was that 90% of my runs were tout seul (ah, poor me!) and so all ditzy moments were witnessed only by me and I was forced to get a bit braver with the cows, but, yes I too have found myself clambering up the grassy bank to get past those very same cows!

Oh and yes that section is a lot hillier than you remember.

I haven't felt baby kicking yet (only tickles), but can't wait.

Oh - which race do you feel most passionate about - London or Fling? My pennnies worth of advice is to do the one you have a passion for - If London has been a forever dream - do it - fulfulling a dream is a strong motivator and ignore anyone else.

Look what happens when I don't join you!

I'll make sure I look after GM on Sunday.

Freudian slip or what?
The Gibbering M becomes the Gibbering B just when the going gets tough!

Enjoyed reading that report, haven't laughed so much in ages!
Thanks.

Cows ARE much bigger than ladies!!

Like Fiona said, that was a fun read. :o)