...has gone by in a flash! I thought time passed quickly pre-Cairn, but it's a whole different ballgame now. I lost count of the times that people said to "enjoy them whilst they're young, because they grow up so quickly". I tutted it off with a mental eye-roll, but really it's so true. Now my little baby is not so much a little baby. He's practically crawling, has three teeth, waves goodbye and can moan "mum, mum" when he wants something. Unfortunately he can scale a room in an blink and can usually find something that would suggest we haven't quite baby proofed the house - entangled in electrical wires, playing with bottles of shampoo...that's my boy! I think he's going to be a mischievous one, but he's still a delight. Sleeps through the night, never cries and eats all his dinner. A bit like Sonic, but less maintenance.

Trying to work, run and spend QT with the family is still a huge juggling act. Throw in my domestic chores and it's pretty much 24/7 full-speed. I have to super-organised and even more super-motivated. I have windows for running and I have to get out the door and go. There's no sitting about humming and hawing or waiting for the rain to go off.

I'm trying to follow the training plan that Coach Lesley drew up for me for last year's London Marathon. In summary, it follow this basic sequence

After the previous Saturday's dismal attempt at a short race, I signed up for the McAndrew Relay Race last Saturday. After running the course as a club training run, I felt better prepared for the race. You know how I don't like courses I'm not familiar with :-) Well the weather was quite tip-top race conditions. Gale force winds and torrential rain. Arriving at the start in Jordanhill, if it wasn't for the team-factor I would have driven away.

It was a bit of a late start - 3pm! Which kind of plays havoc with your day. And meals. I hadn't eaten anything since breakfast, so I bought a packet of Fruit Pastilles and Skittles on the way. I was totally wired and very on puking after than nutrious snack.

I was in a team with Emma (1st leg), Me (2nd) and Rachel (3rd). Emma had a great run and appeared over the the hill - long legs a bounding - look as fresh as a daisy. Setting off along Anniesland Road, running straight into the wind, I debated whether to pass the (slightly larger) runner in front or just sit behind her. Thankfully I opted to the team spirit and ended up passing SEVEN runners on the 3.3 mile course. I felt pretty good and actually enjoyed it...ish. The hills took everything out of my legs though. Rachel took over and had a great run - especially has she hadn't raced for a nearly a year. We ended up 12th out of 27 teams, which we were all quite pleased with.

Saturday night I undid all my good-doing with a night out with Sharon. Mucho beer and a few juniper juices. We still managed an 11-mile (VERY hilly) run on Sunday morning. It was probably one of the best runs I've ever had. Despite the steep inclines (or nosebleed hills as Sharon calls them) and nearly getting taking out on a bend by an Audi 4x4, it was a cracker. With Autumn in full swing, it was a sunny, crisp morning - perfect for a run on undulating country roads. Without sounding too much of a tree hugger, the autumnal colours were gorgeous. A lovely way to pick up my car - which was abandoned at the pub the night before.

After the run, the Mum, Gran and I took Cairn over to Castle Semple in Lochwinnoch to feed the ducks. 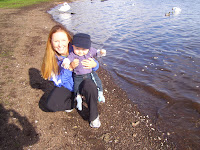 On Tuesday I did some reps round the track at Bellahouston Park and Wednesday I did an 8-mile tempo run (ave 7:49). I decided to get up at 5.30 and do the run before work, as running at lunchtime often adds to the stress of a hectic day. I try to use quite flat routes for a tempo run, as Thursday's club runs are always hilly. I doubt there's a route round Bearsden/west end that doesn't have killer hills. This Thursday's run was quite special, as we took in the stoaters! One being Gardner street, pictured below. 6.23m ave 8:15 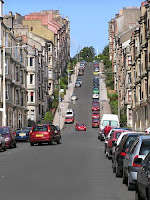 This morning I did the Glasgow Parkrun 5K. I forget to set my watch, so I've got no idea what my time was. I'll need to wait for the official results. Watch this space. Hopefully I'll have time to blog again before Cairn starts school :-)
Posted by Debs M-C at 22:43

Well done. Katrina & I are planning to run it next Saturday.

Yes, he has changed, which is very satisfying from a biologists perspective.
He has gone back to looking more like his Mum - sure you know the science or can find it.

time is flying - soon our babies will be 1 year old - it's insane. Trying to enjoy every minute!