Farewell to the Glasgow Women's 10K

If you tuned into Radio Clyde 1 yesterday, you may have heard my dulcet tones talking about the disappointing news that the Glasgow Women’s 10k has been scrapped.  After 26 years, it’s the the end of the road for the UK’s only all-female 10k. 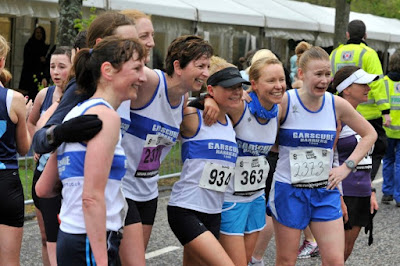 The Glasgow Women’s 10k in 2002 was my first ever race, back when it was organised by Glasgow City Council.  It was the reason I first laced up my trainers and hit the pavements with trepidation on a cold February evening.  Little did I know then that it would change the direction of my life. Dramatic as it may sound, I owe so much to the event.  I’m sure my story will resonate with many local female runners (…of a certain age) Catching the running bug as a result of participating in the Women’s 10K is a common tale in Glasgow running circles.


I have done quite a few interviews and podcasts over the years and every time I’ve credited the Glasgow Women’s 10k as the springboard to everything I’ve achieved and experienced.  People are bored of me harping on about when I started and couldn’t run for a full minute. Never in my wildest dreams would have I even imagined that I would have run on the Great Britain team for five years.  Or participated in some of the world’s finest endurance races. I’ll never forget the early days when would wait until it was dark to go out running, because I was scared someone would see me.


Great Run is citing “dwindling numbers” for the main reason. Falling from 11,000 in its hey-day to only 3000 last year.    Yes, there are many alternative races and events out there but none that match the carnival-like atmosphere and local feel that I have fond memories of.   I’ll be honest and say I haven’t run the race for a few years now. After running it for 10 years in a row, it was always a firm favourite in my race calendar. When the race moved to June, it clashed with other races.  Plus, 10ks are too much like hard work for a ‘lazy’ ultrarunner like me. But really, when the Great Run took over, it just lost its spark.


It was no longer the local running sisterhood blazing through the parks of Glasgow.  It was inflated entry fees and the prospect of running along with city’s expressway. No thanks.  Plus, the phenomenal rise of Parkrun will have effected numbers. Whether you think parkrun is a race or not, it’s certainly replaced the camaraderie and inclusiveness that some events have lost.
So, yes, from a business perspective it may be no longer financially viable to hold the event.  Sponsors want numbers. Runners want bang for their buck. Great Run want to concentrate on developing the Great Scottish Run, which is seeing an increase in female participation.  Anything that encourages women to run, gets a thumbs-up from me.
Of course, the sceptic in me thinks they could have bowed to pressure that there probably shouldn’t be a gender exclusive event in this day-and-age.   There has always been a rumble from the disgruntled about an all-female affair. Usually from the same type who annually wail “When’s International Men’s Day?” Yawn.   Skimming over the fact the Men’s 10K is still going ahead in Glasgow this year. Let’s not forget the shit storm caused by the launch of “Iron Girls 5K” a few weeks ago.  It pretty much offended everyone, and not just the usual outraged snowflakes.
It was never about gender exclusivity.  It was always about women supporting women.  It was about friends, sisters, colleagues, neighbours, Mums, Aunties and daughters just giving it their all. Without the fear of being mock or intimidated by ‘real runners’.  The get-rounders, the jog/walkers, the fancy dressers and the seasoned runners shooting for the elusive PB. It was for everyone. At the sharp end it was once the most hotly contested race on the calendar.
It’s sad, but it’s just a sign of the times.  I’ll always have fond memories of the aerobics warm-up on Nithsdale Road, the locals coming out to cheer, the proud kids’ faces, the purple balloons, the samba bands on route and the long straight to the finish gantry down Mosspark Boulevard.  And the longest queues for portaloos known to mankind.
Posted by Debs M-C at 21:07