Most people are at least a tiny bit sceptical when brands bring out new seasonal lines.  How much can they really improve on what is already a pretty great product?  Just an opportunity to sell more products to an engaged market?  Feeding off the runners’ ego to always have latest and best gear.  For clarification, I am that egotistic runner. 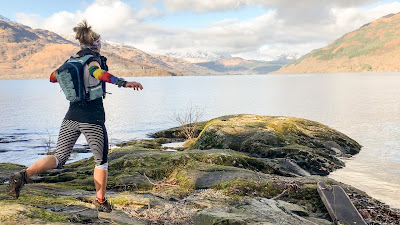 The Jenny Collection was the world’s first line of women’s specific running vest and broke the mould in terms of fit and functionality for females, rather than just unisex products made in a smaller size.

My Adventure Vesta is my go-to training  pack.  My iconic purple pack and I have been on many adventures, in all weathers and covered many miles together.  I have recommended this pack to many women  on the basis that if you are only going to invest in one pack, this is the one you’ve got to have.  There have been many times I could have used the more compact Ultra Vesta, but experience (and subsequent near disasters) has taught me never to scrimp on the hills or mountains. Especially in Scotland when the weather is known to be somewhat changeable. 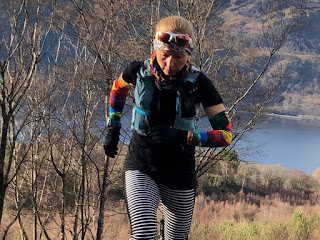 I was very much looking forward to trying out the Adventure Vesta 4.0, the women’s specific park in the new Signature Series.  My first instinct was that is felt lighter and had much more stretch than the original – which is more rigid with less give.  It wasn’t until I put it on that I felt the difference. The new ‘cinch system’ and stretch material means It fits like a second skin and doesn’t move or bounce at all.  The previous velcro side straps and been replaced with bungee cords that tighten around your back, which gives it a more custom fit.

The first time I used it, I was carrying full winter kit (Heavier jacket, full waterproofs fleece, extra gloves, hat, kahtoolas and a multitude of snacks) and I barely noticed it.

Poles ahead: I’ve been doing a few more races, which involve a lot more vertical ascent (Transgrancanaria, TdG and next, UTMB) so I’ve been training a fair amount with pole. I’m not one of those Euro types that look like Nordic walkers on acid.  I find using poles quite cumbersome, so they’re on and off my pack.  Or I just carry them in my hands to save putting them away. The new pole attachment system is very simple, yet very smart and well thought out.  Rather than just a band (which I snapped on my previous pack) the cord is thicker and is secured with a snap button.  There’s a finger loop to pop the button, which is a tiny addition but will save a lot of frustration when hands are swollen, cold or in gloves.  It’s the little things that make a big difference. 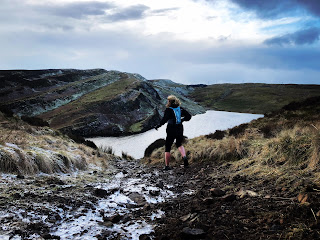 The new Ultra Vesta 4.0 has the same new material, cinch system and pole attachments.  The major differences are the two bottle holders, only two front pockets and less capacity.  Previous editions of the Ultra Vesta and Adventure Vesta have clear disparities.  With new Signature Series, the distinctions are less obvious. At Transgrancanaria 125 last year, I used the Adventure pack.  With the new changes, I might use the Ultra Vesta this year.  I think it will be able to accommodate every thing I want to carry.  Plus, I'd prefer to have the two bottles of fluid. 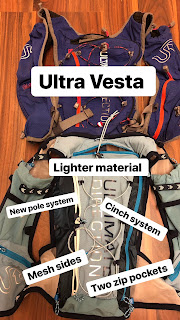 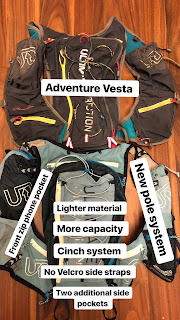 When to use the Ultra Vesta
Fair weather days.  In Scotland, that’s about two.
Trail/road low level running (when less kit is required)
Runs under three hours
Races with aid stations or crew 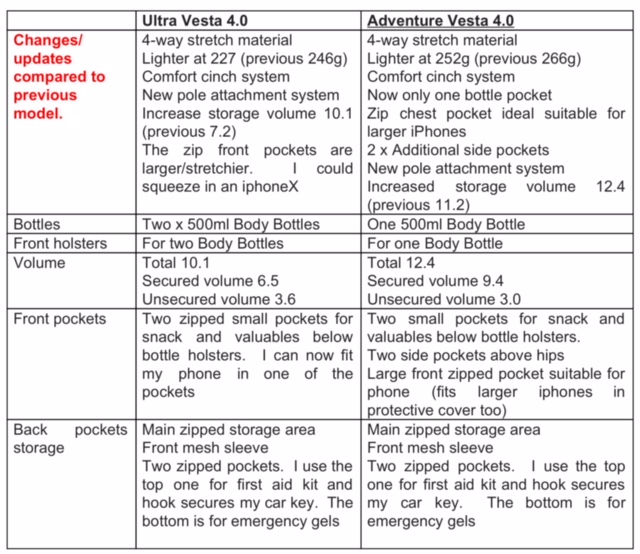 Hello. Thank you for enlightenment. I did not know about such a comfortable vest for running. In fact, you can put not only a smartphone, but also some additional items, for example, necessities, food, etc. It is also very convenient to adjust it, reduce the load on the back.
In general, sport is very useful thing. A run including. I read about this on one of the homework help websites. After all, running is the simplest and most effective physical exercise, which allows you to use almost all parts of the ligamentous and muscular apparatus. In addition, the joints of the human body receive a payload during running. Running increases blood circulation, oxygenates all organs and tissues. He trains the vascular system and prevents many heart diseases.

I need someone to write my resume, if you can advise me someone or you know a good resume writing service it would be great. Also, share with me your experience if you had.