The Idiots' Guide to Running The White Rose 60

Having only recently discovered that I didn't have the points to enter UTMB next year,  I was in the frustrating position where I had to run a race to, well, run a race.  It's a topic that has been discussed and slammed at great length, but I wouldn't get a foot in the door without the nine points required.  I was two short and realistically my only options were the White Rose 60 last weekend and the CTS in Dorset in December.

While still nursing the aftermath of Spartathlon, I chose the White Rose 60.   It was always going to be a big ask, but all I had to do was get around in one piece.  Ships burned.  No excuses.

As a late entry - with low expectations on racing 60 miles - only a few people knew I was doing it.   Even the super-observant John Kynaston missed my name on the entry list.  He was surprised to see me at race registration, but within five minutes we'd already agreed on a mini competition - cloest lap times - and he was relaying stories of the good old days when he used to beat me. #backinthedayJK

The White Rose Ultra has three race options: 30, 60 and 100.  The 30 mile is stunning loop around the High Peak, Colne Valley and Pennines. The 60 is two loops and the 100 in three loops with an extra bit thrown in.  It's relatively low key and relaxed.  A sharp contrast to my last gig in Greece.

I was so unprepared for the race that I was still debating shoe choice at registration.  I had no expectations and no course knowledge, but was hoping to finish in 10 hours something.  Just plucking numbers with a goal of 5ish hour laps.  Mainly because I had to drive back to Glasgow after the race.

At 8am the 30 and 60 mile participants we set off.    The 100 mile race started at midnight, so most were already one lap down. There was no
distinction between who was in what race, so it was hard to tell who was competing against who.

There's a lot of road on the course - maybe 40% - but it was either up or down.  And what was off road was boggy.  Bit of a mixed bagged really, so glad I chose my Salomon S-lab Sense. 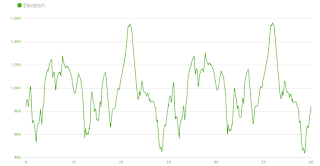 There are stocked checkpoints every five miles, so it was easy to break down the lap into six sections. I carried my own Torq bars, Shot Bloks and Gu gels though.

My plan was to take the first lap steady, stick with people and get my bearings.  Although the course is well-marked it's a bit tricky and easy to miss some of the turn offs.  I was called back once (thanks Kate) and was very hesitant at some junctions until other runners caught up and kept me right.

The weather was absolutely glorious.  Hard to believe it was November 1.  At points it was quite toasty and I got really dehydrated and had a tough couple of miles before the CP at 21 miles.

I was back at race HQ in 5 hours 17, quickly picked up some supplies and moved out onto lap two. Speaking to some of the 30 runners, they couldn't fathom why anyone would want to go out for another lap, but I was fairly relax about it.  Maybe because I am used to lapped races, but I think it was because I could relax and just enjoy it having already covered the course.

Starting out on lap two I realised I'd forgotten to pick up my bottle of Coke.  Giving my inability to eat - and my caffeine addiction - I rely quite heavily on Coke during races.  All I could think about for the first five miles was Coke - and CP didn't have any.  Crisis.

Pushing on I spotted Matt and Rich Wilson ahead.  I'd overtaken Matt in the Lakeland 100 last year and the Lakeland 50 this year, which he wasn't enamoured about.  It was pretty apparent they (Matt most likely being the instigator) weren't happy about me catching them, as they seemed to find another gear.  But the gap remained the same for a few miles.

Most of the route is on country roads and trails, with a few road crossings to negotiate.  Approaching a road crossing at around 37 miles, I made the assumption that the roads were really quiet (as they had been all day) and ran straight out.  Not wise, as I was hit side on by a car.  I was knocked onto my right side and just lay on the road - trying to assess the damage.  Another car stopped and there was a bit of frantic panic above me, but I don't really recall what happened.

The poor lady who hit me was obviously shaken and kept repeating that I'd just run out in front of her.  The other chap was trying to help me up but I was bit shocked and trying to let the initial pain subside.  He was really kind and asked to give me a lift home or to the hospital.  He looked a bit baffled when I declined as "I was in the middle of a race".  Really I was thinking: "Naw, mate.  I need to the two points for UTMB".

I pretty much left them standing and got going again.  With my heart rate maxed out and on the brink of tears,  I couldn't believe what just happened.  To be honest, the fact that it hasn't happened to me before beggar's belief.  I was just really lucky it was a cautious driver and not some boy racer - or anyone who drives a Merc.

My shoulder, hips and ribs took the brunt of the hit and fall, but it wasn't too painful.  Although I was winded and had some discomfort across my chest, I made the decision to keep going.  Then my next thought was: Those fecking Wilson Brothers have got away.

Being super cautious on the roads and sticking to running towards the traffic, I crossed over to take the left turn to see Frank's crew waiting at the junction.  I planned on being cheeky and asking if they had any Coke, only to see on approach a little angel with a can of Coke his hand.  They had overheard me asking at the last checkpoint.  It was a god send.

By the time I got to 45 miles, I'd caught up with the Wilson Brothers again, but they kept pulling away. Ideally I would have liked to have passed them, but I didn't want it as much as Matt did - who was checking every half mile to see where I was.  Watching the turning headtorches made me laugh.

I was just quite happy with finishing.  I never knew where I was in the race.  It wasn't until I got to a CP at 51 miles that I was told I was first lady and 5th overall.  After I was trying to work out if I could break the ladies record set by Shelli Gordon last year in 11:08.

The shuddering was hurting my chest and ribs and I was so paranoid that I'd fall, but I knew if I was going to miss the record it would only be by a couple of minutes.   My friend and CR teamie Eddie had sent me a charm bracelet with the words "make it happen" on a few weeks earlier and I started chanting this over and over.  Still not the craziest thing I'd done that day.  I finished in 11:05. 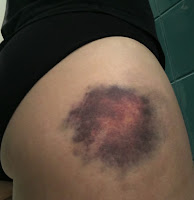 It was definitely adrenaline that kept me going, as within half an hour of finishing I was feeling it.  I could barely get my shoes off. The four-hour drive home was horrendous, arriving after 1am - and then I couldn't sleep for the pain in my ribs and hip.

A race too far for me, so time for some proper recovery now.  Even without the incident, my body is broken and I'm knackered.    I would normally use the expression "I feel like I've been hit by a bus" but I don't want to pre-empt anything.

Oh my, that's one eventual race. Well done on race win, incredible result given that isn't not that long since Spartathlon.

Now, that attempt to get an white rose on your leg, and unconventional approach, and the result is more of red rose. Trying to re-ignite a war are we?

Seriously though, amazing that you were able to run after the car crash, let alone take the CR. Adrenalin, Coke and heap of true grit wins the day.

Best of luck with a speedy recovery.

Great to see you on Sunday and congratulations on a superb run. So sorry to hear your accident. The lady on the finish line was telling me what happened and I could tell from her voice that she couldn't quite get her head round the fact that you carried on! I just said she's hard core!

Congratulations too on winning our mini competition but be warned I will find a competition one day that I will win!!!

Wow, I'm traumatised by the report, never mind the pain of being run over! Another inspiring run by one of the UK's strongest and most impressive talents. Well done Debbie, and thanks for the fearful pre-race mantra - 'Don't let me catch you'. It pushed me through the 100 during some tough times :-) x

I didn't realise you'd had such a dramatic day! It was good to see you at the start, well done on a great performance - time for a bit of a rest now....

Oh my god!! So glad you're almost in one piece and well done on the result after that trauma! Rest up and I'll see you in Chamonix!! X

I had no idea you'd been in an RTA when I saw you yesterday, Deb. You're truly hardcore. But disregarding your accident, new temporary tattoo and race win, my foremost thought is Cairn's comment: 'Mum, mum...tee, hee...there's someone on the guest list called David Water- Man....tee, hee :-) '

Like David, I also had no idea when I saw you at my wedding looking gorgeous and dancing your socks off that you'd been in RTA , finished forst last and on a new course record. If I'd known that it would've got a mention in the speeches. Amazing, you are amazing xx

You missed me hiking up my dress to show everyone the bruising :-) I'm classy that way. I had to bow out of the ceilidh dancing. And hugging people :-) xx

hope you're mending, George told us on Friday about your accident :( take care of yourself you mad woman xx