First post for a while.  I feel this post is like having a silly argument with a loved one.  It just needs someone to break the silence and then all will be forgotten and forgiven.  So, this is me breaking the silence.

Here's my plans for 2015. Subject to change.  Possibly by the time I've pressed "publish".

February 14, 2015:  Donadea 50K
What better place for a romantic St Valentine's weekend than the beautiful surrounds of Donadea Forest Park in Co. Kildare, Ireland?  Shame we're only going there to run 10 loops of the forest trails. And then jump on a Ryanair flight home the same day.  It's the Irish 50K championship and an IAU champs selections race, so I guess it will be wicked fast and I'm prepared to be lapped. Lots. Last year's winning time was 2:59.  I've never run a 50K before, so I'm looking forward to it. Although if the weather is grim - let's face it, it's Ireland in February - it will be an interesting experience.

March 8, 2015:  Balloch to Clydebank half marathon
Following on from my PB of 1:35:12 at the Great Scottish Run in October, I'd like to have another crack at the half marathon distance.  This is a local point-to-point race and popular with club runners.  Fingers crossed for a tail wind. 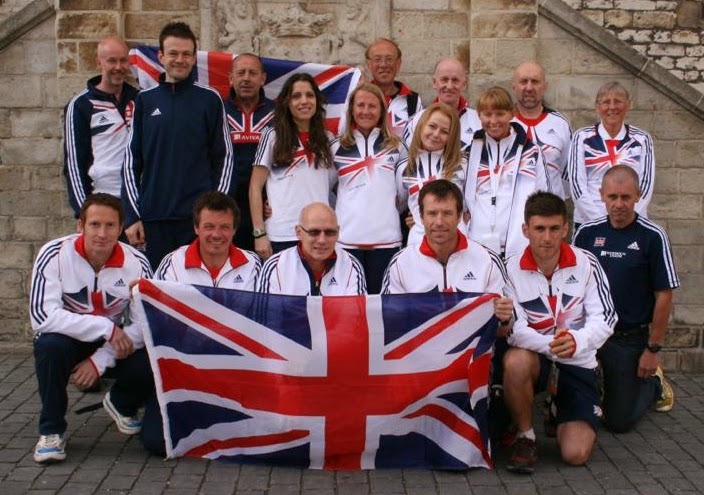 I was delighted and honoured to be selected to represent Great Britain and Northern Ireland at the championships in Torino, Italy.  Even more delighted that most of my old team mates will be there too.  With some new faces - including Sonic in a vest, not with a crew badge.

This will be my third outing in the GB vest. Obviously this is my A+ race for the year.

Probably not the best idea a month after a 24-hour race, but I love this event.  It's the reason why I started running nearly 13 years ago.  I did it 10 years on the trot, but the last couple of years ultra racing has got in the way.  Given the lack of recovery time, this might be the year I do it in fancy dress.

May 27: Kilpatrick Hill Race
Strava buddies will know that I do a fair bit of joggings around the Kilpatrick hills.  Just a few miles from my doorstep, it's the perfect escape without the logistical dramas.  This has been on my to-do list for a few years, but for one reason or another - mainly because I find hill racing quite intimidating - I've never got around to it.  Now I've blogged about it, I better not back down.

June 27, 2015: Arrochar Alps race
Again, not too far from home.  I've done all the munros there, but not as a circuit.  With 2400m of climbing across the 25km course, it's certainly going to be cheeky.  Good training for Lakeland 50 though, right?

Which, of course, leads me on to the Montane Lakeland 50.  After running the Lakeland 100 twice, it's time to up my game and have a crack at the 50.  It's a different ball game.  I think the 100 is the easier option.  Once I get the 24 is over, this is my next main focus.  Hills and more hills.  Actually running on hills!

September 26, 2015: Spartathlon
Well, I've completed the application.  Just waiting to hear if it's been successful or not.  I'm hopeful as I'm lead to believe females athletes who have run further that 204km in a 24 hour race "will be automatically initially accepted".  I guess it depends on how many athletes enter with the same prerequisites.    Anyway, this race is high on my bucket list.  153 miles through the boiling streets of Greece. Anyone who knows me, know I don't cope well in heat.  Why then?  I'll get back to you on that one.

And that's as far as I've got.  There will be a few Parkruns thrown in there too. Nothing for last quarter yet.  Although don't mention Barcelona!

I hope you get your place for Spartathlon!

I admire how you make sport the first thing in you life! I blog sometimes at Kibin.com when I occasionally do some sports or visit events.