There's not really much you can say about a 12-hour track race in Crawley, is there? Somehow I've managed to talk at considerable lengths about it though.  Cutting the trailers, here's the short version: 1st lady with 129km/80miles. 2nd overall. Course record. Scottish record.  And a second world best for 2014.

And now the tea-and-biscuit version...

I'll be honest, this race wasn't on my bucket list.  Or any list for that matter.  I had floated the idea of doing a 12 hour race - and I had unfinished business with the track - but I wasn't overexcited about going to Crawley.  Granted a track's a track.  But the scheduled GB team meeting/training weekend clashed with the other races that I did have a burning urge to do.  I did train properly for it and it was always an A-race, but I was in a bit of a huff about doing it.  Am I back tracking on that a bit now? You bet.

The race was the first time that Sonic and I would go head-to-head in quite a few years.  He did say that we were running in different races, but I know he had moments of mild panic.    We all know he would run circles around me and he quite literally did.  But on paper, I was his biggest threat and me beating him would be his biggest nightmare.

Sonic was taking on the race three weeks after her fantastic run at the Glasgow Edinburgh Ultramarathon. He set a new record on the 55 course in 6:19.  A mere 55 minutes ahead of second place in a very pedestrian 6:52m/m average pace. I was secretly (or not) hoping that his exertions would have taken it's toll, but in reality his confidence would reign supreme on race day.  He had been - as my colleague would say -  "walking about like a dog with two d*cks" since, well, Tooting. Crude, but apt.

As previously mentioned we were there for a GB 24 hour team gathering.  Despite the grey cloud of having to churn out some laps on the track, it was great to catch up with the troops.  And BrotherSonic and Gillian had come over from Bournemouth my gorgeous little nephew, Luca.  Socially, it was always going to be a top-notch weekend.

On the Friday evening, we had a  team meeting to discuss various points from last year's 24 hour World Championships and plans for this year's championships.  At the time the only information that we had - after the event in the Czech Republic was cancelled - was it may or may not be rescheduled to take place in Taiwan later in the year. 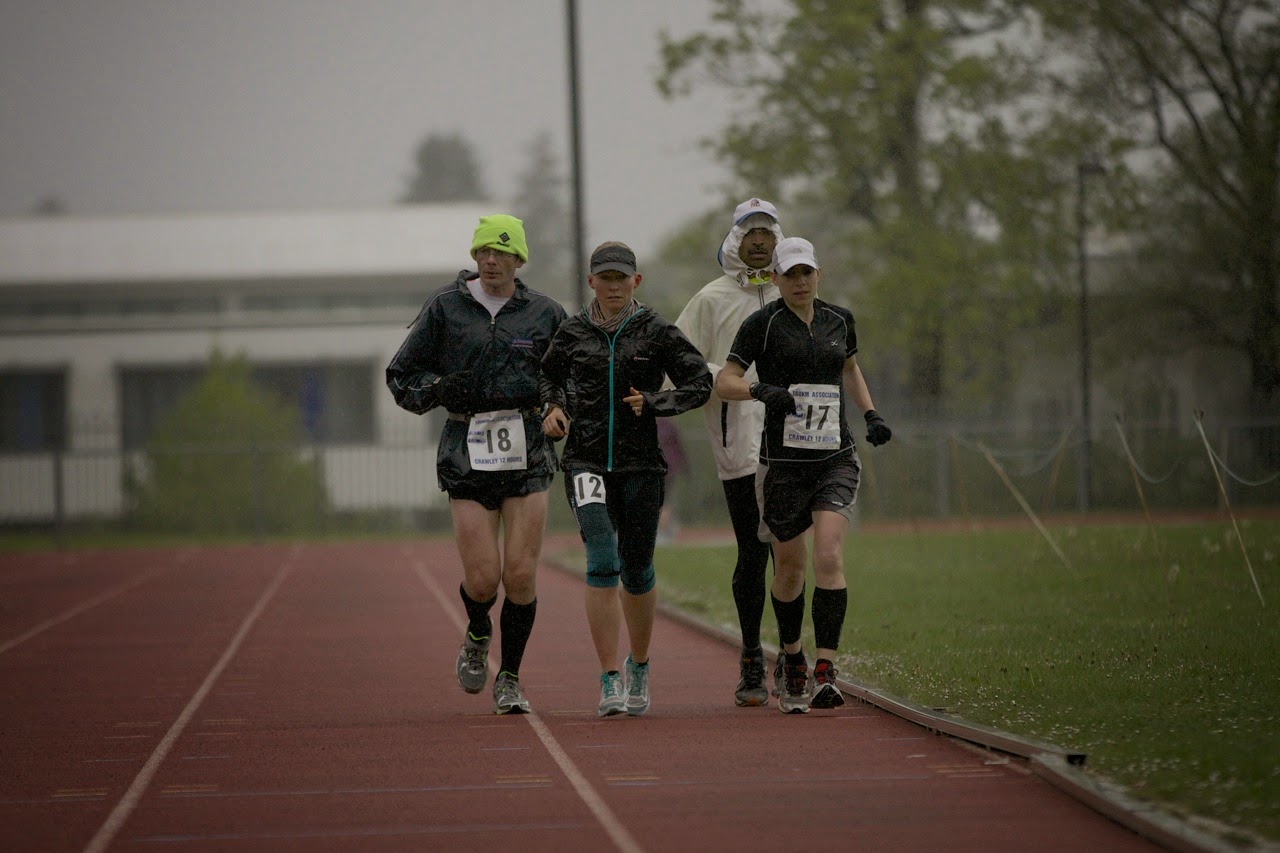 On race morning, the rain was pouring and the trees were bending in the wind outside the hotel room.  Less than ideal for an exposed track, but the forecast had promised fairer conditions from mid morning.  So, I covered myself in factor 50 before starting the race in a rain jacket and gloves and donning a sun visor. Fashion a la Scottish summer style.

At the start line.  Actually can I call it the start line, when it was the same line I crossed every two minutes for 12 hours?  Anyway at the line, I was nervous.  My heart rate was through the roof.  Way more than I expected to be.  I think it's down to the fact I don't race enough.  I don't do races as training runs.  Or training runs as race for that matter.  I even get the jitters doing my local Parkrun.

BrotherSonic had kindly volunteered to do my support, but I didn't have a plan for him. At the end of the day I would only be a couple of minutes away from another lap, so I was just going to shout up requests for the next time around.  It worked perfect.  Plus, I was using the race to test all the ideas that I never got the chance to try at the Barcelona 24. Or in my case, the Barcelona 12km.

I'm not going to give you the lap-by-lap account, or even the hour-by-hour version, but running around a track is a lot easier than I thought it would be.  To be fair, races do always seem easier when the stars align for you on that given day, don't they? 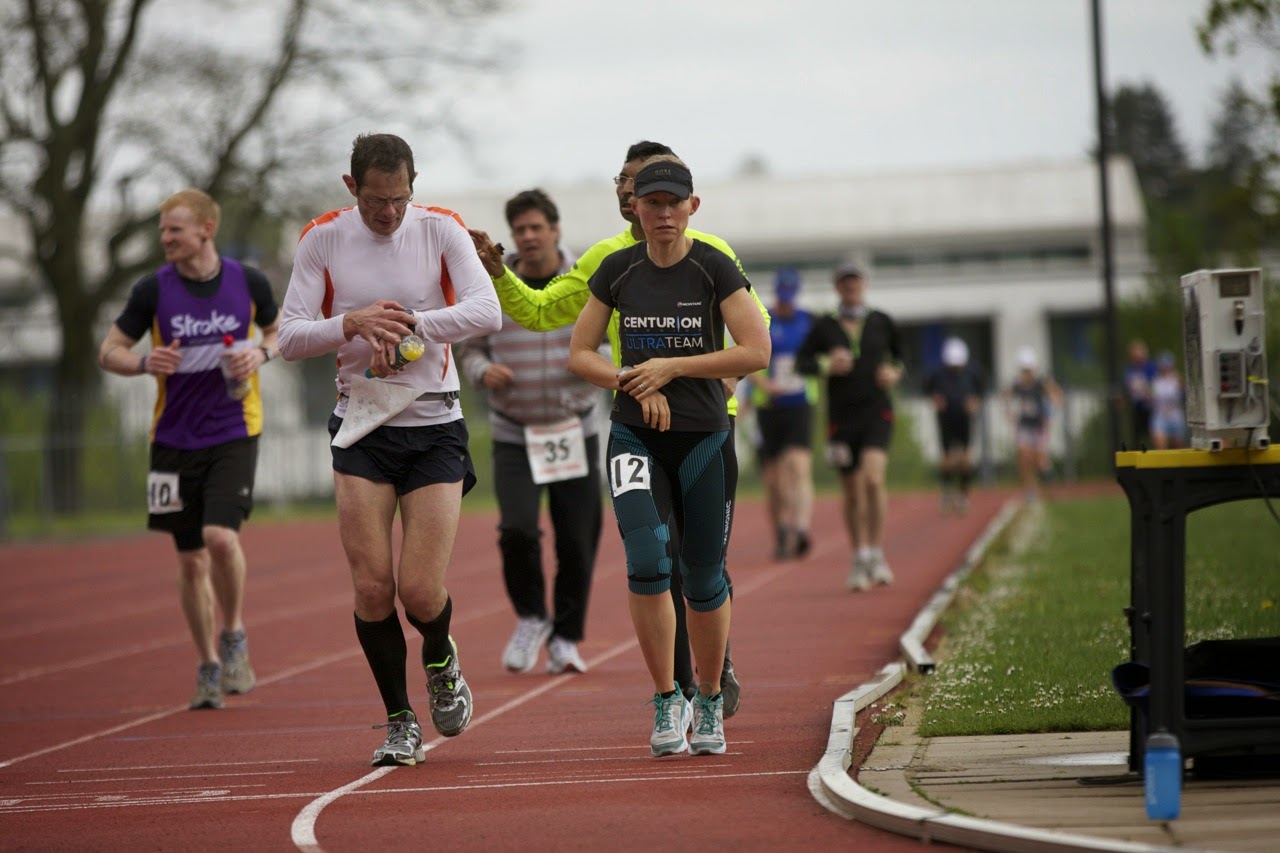 Physically, I knew I was in OK shape.  But more importantly, on race day, my head was in a good place.  I was certainly happier being there than I have been on any of my 24-hour races. I wouldn't go as far as to say I really enjoyed it, but I was very content in the moment.  I didn't think about the distance or the clock. Only each lap/hour.

Even in the latter stages there was no stressing and frustration and willing the race to end (which is the norm for me).  There was no killing time (also the norm).  I was focussed on lap splits to the bitter end.

This is a display of my lap splits.  The red dots (or slow laps) were: First, removing all warm/waterproofs and then three toilet breaks.

My friend and GB team mate Karen Hathaway kept me on my toes for the whole day.  Jeez, I nearly caused myself internal injuries not going to the toilet as often as I should have, as I deemed this as a luxury I couldn't afford :-) She ran a brilliant and very even-paced race.  I suppose on paper it looks closer that it was, but it took me the whole 12 hours to build up to that < 2km lead. 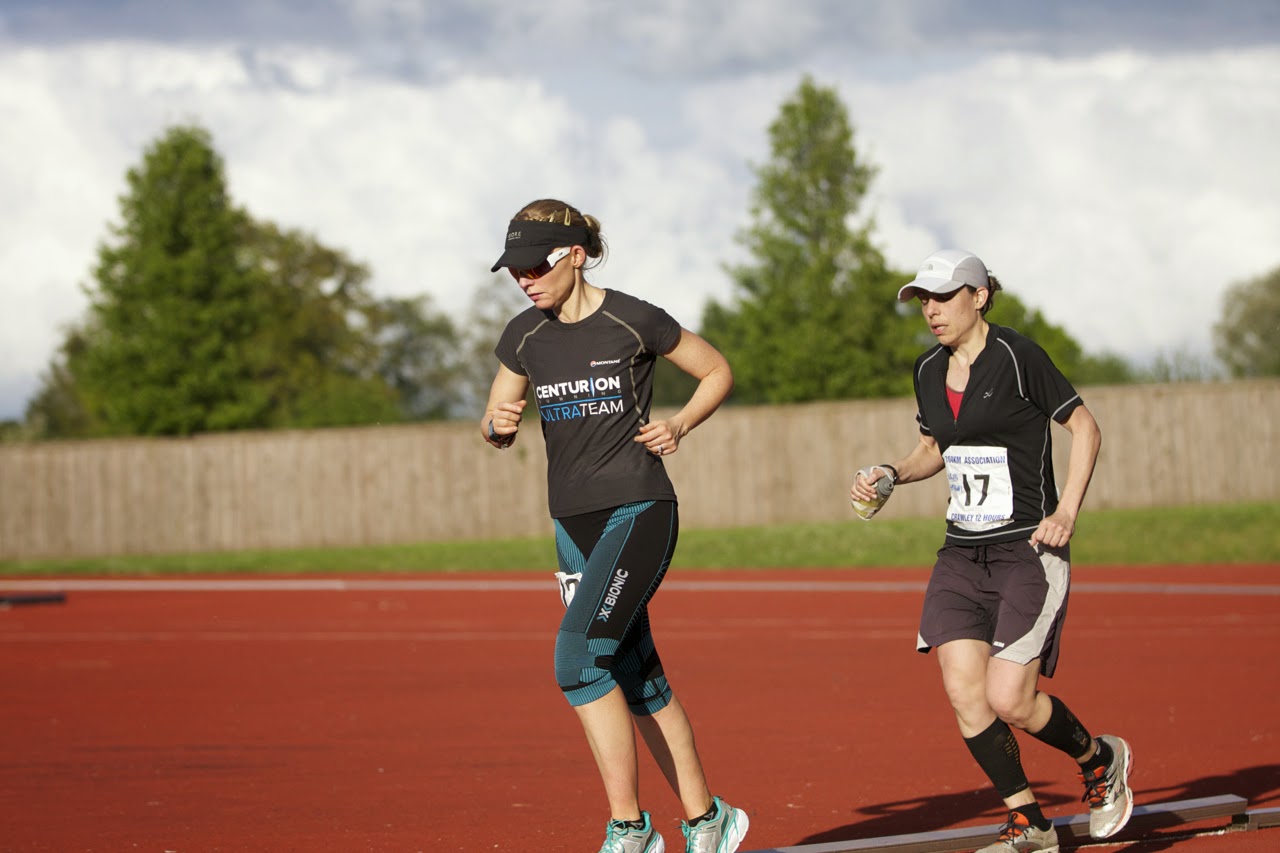 At around nine hours (I think!) it was announced that the 24 hour World Championship had been confirmed for Taiwan and this really spurred Karen on.  She had a real power hour, which quite frankly put the shitters up me. I knew I had lapped her every two hours, so I had to at least match her lap for lap to keep my position. From previously races, I knew that Karen really comes into her own in the final stages, so I couldn't rest on my laurels.

During the 11th hour I knew I would comfortably break the (unofficial) Scottish 12 hour record and informed BrotherSonic of this.  Then there was a little kerfuffle amongst the support crews as - I later discovered - they were frantically trying to confirm what the British record.  I didn't know what the record was, who had it or when it was set.  Nothing.  It hadn't even crossed my mind before or during the race, as I just assumed it was so far out of my reach.

Turns out the record belonged to Eleanor Robinson - one of the GB 24 hour team officials - who was on the sidelines that day.  She set the record of 128km (79 miles) in 1985 and it'sstood for nearly 30 years!


Then with a little over 20 minutes to go, BrotherSonic told me I needed to complete another nine laps to beat the British record. Calculating that in my already frazzled brain meant that I'd have to run my fastest laps to get it.  It's amazing what your body can do when pushed, because I ended up doing nearly 11 laps to clear the record by 771 metres.   Eleanor was very gracious about it and has since sent me a lovely email to congratulate me.

The support from those on the sidelines and the runners within the race was amazing.  I apologise for anyone who felt bullied out of the way as I charged around in he latter stages.  OK, in my head I was charging.  But, visually, think Chief Brody in the get-out-of-the-water scene in Jaws. 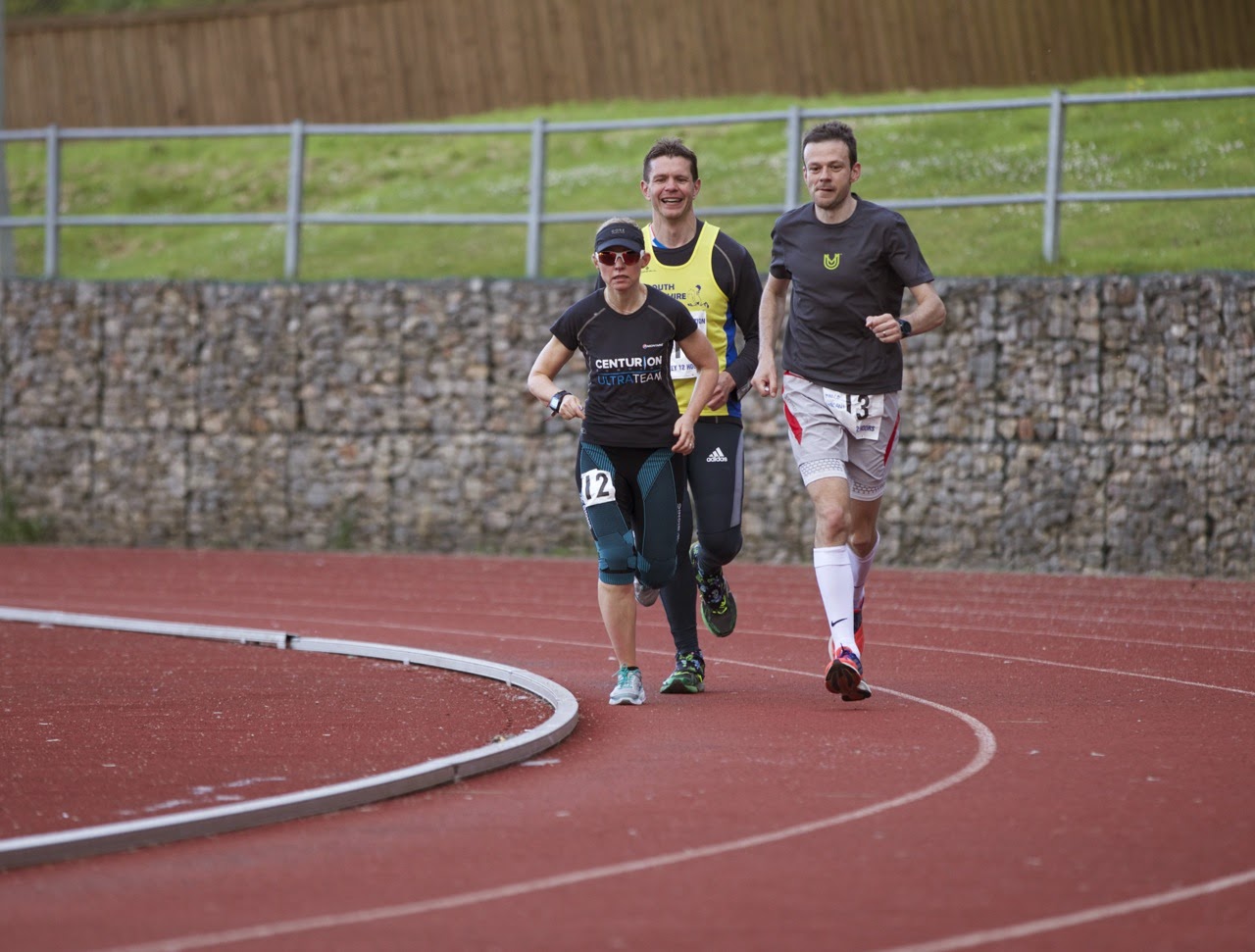 Sonic joined me for the last lap, despite my request for him to leave me. He's kicking himself now though, as he lost out on the world best second place by two metres!!  He maintains that he was happy to join me for the British record moment, but I knew if he were to do it again, he wouldn't be sitting in third just now!   He had a great race though and set a new course record of 90 miles.

So there you have it.  The Condensed version.  Big thanks for BrotherSonic for being brilliant on support. It can't be a coincidence that he was on duty for the GUCR, TP100 and Crawley 12, so he is now officially my lucky charm.  Thanks to Pam Storey and the race officials who put on a great show.  And to the Crazy German for chipping in and taking such great photos.

The most impressive feat of endurance had to come from our lap counter, Sharon Herbert.  Sharon had the unenviable task of counting laps for BOTH Sonic and I.  And we're not talking ticking a box.  Our laps sheets have race time per lap and lap splits.  My head hurts just thinking about all the numbers.  Plus, she didn't even take so much as a comfort break. She was there every time I passed.  Amazing! Thank you, Sharon.

It was a great day out.  The nicest thing about a track race is having the opportunity to speak to everyone in race and meet lots of lovely people.

Well done to everyone who took part in the six-hour race too. Especially to Adam (winner) and Emily, Fionna and the GM who were 1st, 2nd and 3rd ladies respectively.

Hey,Debbie ,delighted to have witnessed your great deeds .You and sonic, I learned a lot from you guys, I've had better days but you guys really inspired me ...no exscuses next time....any time you visit dublin, I don't want to run with you!!! Lol
Good luck to you and Sonic!
@Canteenrun

You win though, bagging yourself a record and actually updating your blog too :-)

You make it sound so easy! Awesome!

Fantastic run, and great write-up (I will ALWAYS take the tea and biscuit versions over the short ones!) - well done. x x

Fabulous running and fab write up. I laughed at the part where you said I slowed down to join you for your last lap. You are kidding - I was trying to keep up. :-)
Mxx

For this reason, both North Korea and South Korea have casinos open for business. Gambling is certainly among the many most used pastimes on the planet. However having its probably addictive nature and the 로스트아크 social penalties that this might entail it has been deemed unlawful in lots of nations around the world. As in nearly all of Asia gambling in South Korea is, in precept, unlawful. It states in the Criminal Act, Article 246 that anybody who gambles or bets for the objective of gaining property will in all probability be punished with a fine as high as 5 million Won.