After three years of supporting yours truly during 24-hour races, Sonic decided to throw down the gauntlet and go for GB qualification himself. After his phenomenal run on the West Highland Way Race, I bullied him into submitting his entry form for Tooting Bec 24-hour track race. Note: I’m only on the second sentence and already taking credit for it.

Sonic doesn’t lack confidence and self-belief, which is something that will take him further than his skinny legs.  He had a goal that some people may have quaffed at, way beyond the 235km minimum team standard qualification.  But as they say: Fortune favours the brave.

When we arrived in Tooting on Friday afternoon, I told Sonic to rest up and I would go and do all the shopping. Apparently four bananas would not suffice, he needed “at least 12”. Eight slices of caramel shortcake wouldn’t cut it.  At least three packs were required.  Yes, 24 slices of caramel shortcake. Along with 20 9-Bars, chicken breasts, a family-sized block of cheese, various snacks and a million litres of drinks. Four trips to Sainsburys – and a broken back – later I was done. And done in.

I decided to go for a little run and check out the track location.  Tooting is crazy busy and after an afternoon of negotiating my way through the High Street – with their pound shops, halal meat counters and betting shops aplenty – I was glad to head to the leafy area of Tooting Common.

I was glad to have done the recce run – I do love a good recce – as the taxi driver in the morning would have have taken us to the wrong sports’ centre.

It was a bit surreal turning up to a race with only 45 participants and trackside packed with tents and open-boot buffet displays.

We found some spare grass and after asking another runner, Marcus, to move his car over (I know, the cheek of it!) we pitched up next to Fionna Cameron’s pit-stop - with the lovely Keziah on duty - and Richie Cunningham’s crew of Drew Sheffield and Claire Shelley opposite.  The official Team Scotland camp!

You know you’re in a new age of social media friendship swhen you find yourself more and more having introductions that start like Nici’s:  “You don’t know me, but I follow you on Twitter” and Ali’s “I read your GUCR report”.  Supporting Stephen Woodus (aka Woody) they were an absolute riot to hang out with.  And thankfully they were around to help erect a brand-new-out-of-the-packet gazebo we had brought down for the occasion.  I kind of looked like a Punch and Judy tent, but it did the trick.

Just to put the GB pressure on, my team mates Emily Gelder and Karen Hathaway came along to help me out.  A team manager, Richard Brown was there scouting for fresh kill.

I’m not going to write about the race.  Mainly because I didn’t run the race.  And Sonic is threatening to write his own blog post!  So, here’s the lowdown on Team Scotland. 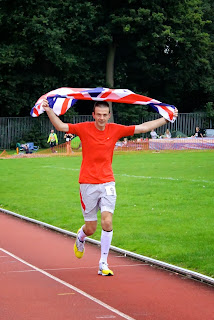 For the purpose of this report, I will now refer to him as SuperSonic.  If you followed the race or happen to be one of his aforementioned “social media friends”, you will know he absolutely smashed it. The most impressive bit was he managed to keep a lid on it at the beginning.  Even when he was knocked to eighth place because of his scheduled walking breaks.  Pushing through he took the lead a few hours in and pushed a bit more to finish with a mere 20-mile lead.

He was overly smug about beating my 100K time and I was overly restrained to tell him that I’ve only ever run one 100k and it was a piss-poor performance.  Then he hit 100 miles at 14:31 and broke through the 235km GB team qualify with an hour and a half to spare.

I’d secretly packed a Union Jack and asked the lap counters to make an announcement so he could do a victory lap.  Then whipped the flag off him and sent him on to punch -out another 13 kilometres.  A total of 620 laps to clock 154 miles (248km)

That’s the best distance by a GB athlete this year.  Third on the all-time Scottish list – behind the records and seemingly unbreakable 166m distance set by Don Ritchie and 154 miles by Mick Francis. All in a debut 24-hour race.

Just for the record though, he only ate four bananas and two slices of the caramel shortcake.  If you see any flightless birds around Tooting, don't blame me!

Fionna Cameron: 1st lady, 2nd overall with 216km (134 miles)  Another sterling debut performance, with 134 miles (216km). There must be something in the water at Aberdeen Asset, as Marco and Fionna work in the same office.

Fionna is lovely, yet very determined.  Actually if you were to look up “lovely” in a Thesaurus, Fionna could be the first alternative. The 24-hour did something strange to her character though.  There was spitting, snot-rockets and tantrums.  Thank god!  Don't want her showing up the GM and I at the next GB outing.

Stephen Mason: 5th with 198kms and (123 miles)  I ran with Stephen on the Scotland team in my first 24 hour race in 2011. He went round like and train and came through a few – understandable – rough patches.  At one point I had to shout at him, as he was running around having nodding off.  I kid you not! 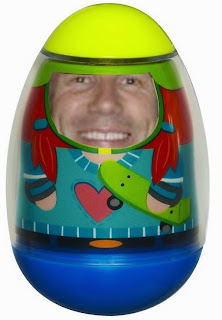 What can I say about Richie?  He showed he’s a true Scotsman by spending the vast majority of the weekend spewing and slurring his words.  I’m not sure when he starting the projectile vomiting, but it pretty much lasted the duration.  Heroic or stubborn?  Either way, there was no stopping him.  Even defying the medics.  Like a Weeble:  He just wobbled, but he didn’t fall down. I’m not sure how he did it but he clocked 120 miles on absolutely no fuel.

This was when the fun started. Firstly, Sonic collapsed. Personally, I think he was just enjoying lapping up the attention of the female medics.  Then he proceeded to thank EVERYONE within a mile radius for their amazing support and encouragement.  Not even a single mutter to me, who had spent 24 hours on a trackside!  And, quite frankly, you should never underestimate the difference an experienced support crew can make ;-) 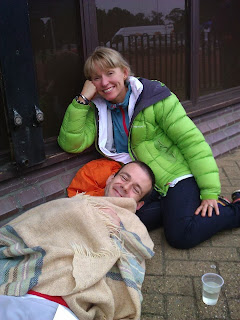 After leaving him in the capable hands of the professionals, I went off (in a huff) to pack up the stuff and get Sonic’s after race kit.  On return, Richard Brown accused me of “being very nonchalant” about the distress my husband was in. I would have explained, but I’d already chewed my tongue off by that point.  Then Sonic collapsed again.  When his lap counter appeared to congratulate him, he was practically crying with gratitude. I might look really tired in this picture, but I’m (shamefully!) contemplating whipping my legs out from underneath his head ;-)

All very childish in the cold light of day.  I've been there and I know how grateful you are.  Let's put it down to sleep deprivation! 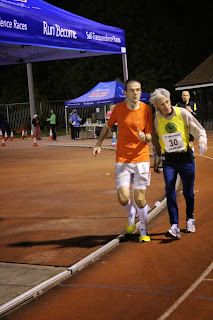 The prize-giving was lovely.  It was so nice that everyone’s efforts were recognised.  Especially, Geoff Oliver who at the grand age of 80 had set SEVEN new world records during the race.  Then turned up in the prize giving in a shirt and tie and gave a wonderful heartfelt speech. It was an honour and a privilege to watch his amazing performance.  Sonic was obviously using his race tactics to take him out during the hours of darkness (see left).  I would like to know what Geoff was listening to on his ipod though.

Then we had to get the train from Euston to Glasgow.  And we still had to get the Tube to Euston. For both of us, this could officially be the worst experience of our lives.  Sonic was broken, sick and emotional and I was carrying three duffel bags through London.  It was nothing short of a nightmare. I liken it to trying to negotiate with a bad tempered drunk. 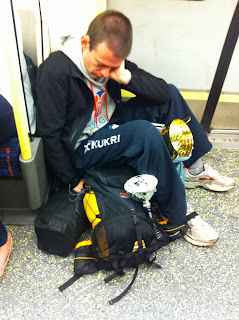 On the tube, Sonic decided he was going to drop down and sleep. At the door!  I couldn’t even help him, as I was trying to balance all the bags on my body.  My head was going to explode with the weight on my shoulders and I’d lost all feeling in my hands.

This picture makes me laugh so much, I have used it as the contact picture on my mobile, so pops up every time Sonic calls me.

There were works on the tube line, so we had to get three trains to Euston.  Of course, I did my best support job and accepted that everything was my fault. Of course.

I did have to giggle when I looked back to see him shuffling along, muttering expletives to himself  It was less comical though, when he decided he was too warm (also my fault) and stopped dead in the middle of an unforgiving fast-moving hoard of people to roll up his trousers.  That really set off the look.  Thankfully it was London and therefore no one bats an eyelid at neurotic behaviour.  Even when he staggered along the platform with his trousers rolled to his knees – his carrier bags of trophies in each hand – and then stopped to slide down the wall in tears.  In hindsight, it’s hilarious.  Hey, don’t judge me.  Sonic posted a video on You Tube of me after my first 24-hour race.   If had any feeling in my hands, I might have done the same.

Then we finally made it to Euston.  Of course our reserved seats on the Virgin train had to be at the opposite side. I swear it took us 15 minutes to walk the length of the train.  I’ve never been so happy to sit down - or for Sonic to pass out -  in my life.

Even after all that, whoever says supporting is harder than running is at it. I had a great time.

brilliant. lol I do recall that pic of you & Sharon negotiating stairs! x

What a great read :) I chuckled at your description of the tube journey and this race winning, GB-qualifying athlete falling asleep clutching his trophies, but it must have been utter hell at the time!
Huge congratulations all round!
Rhona

Absolutely awesome stuff, how Sonic managed all that on a tiny amount of food too is mental.

Well done to all the Scots, you did good!!

It was only a mild strop too, Fi. I think Kez was just really shocked!

Such an amusing wee post, brings a smile and sense of awe at the same time.

A huge well done to Marco, quite simply an amazing performance. Getting your name in the same sentence as Don Ritchie and actually deserving it too is a sign of good things to come.

Fab post. i remember that video too! i felt for you honey.xxx great job both of you!
Neet x

Brilliant! I was hanging on every one of John K's updates during the race, and shouting at my laptop, a bit like watching the athletics on the telly, so glad to hear some of the details, I'll look forward to reading Marco's report. Sorry I had to laugh at your journey home, it brought back memories of getting the train back from Hull after Pauline's first 24 hour race. Take care Fiona xx