Since we first met at the Commonwealth 24 hour race in 2011, where we ran for our respective countries and then went on to qualify for Great Britain, we have become really good friends.  Running 24 hours together – three times – certainly fast tracked the bonding process.   Despite the inevitable despair that comes with the event, we’re a really tight team and have always had really good fun.

After the World Champs in Holland, we decided to have a wee girlie weekend without the pressure of racing.   A bit of training, some personal achievement and a few beers thrown in and The National Three Peaks Challenge seemed like the obvious solution. 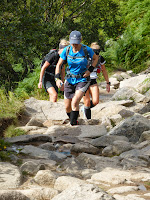 An achievement, more than a race, the challenge involves climbing the highest mountains in Scotland (Ben Nevis), England (Scafell, Lake District) and Wales (Snowdon, Llanberis) within 24 hours.  Which also includes about 10 hours of driving between Fort William and Llanberis. 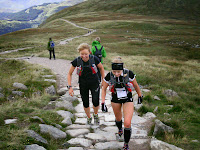 The ascent up Ben Nevis was amazing.  I’ve been up there about five times and have only ever once got a view.  As one of the wettest places in the UK, it’s rare for Fort William to be basking in sunshine.  Usually on Ben Nevis, you can’t see passed your feet because of the mist. 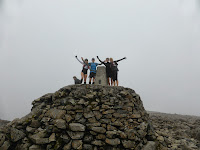 It was Baltic freezing at the summit (1344metres) though and the GM’s signature hotpants certainly turned a few heads.

Scantily-clad and on a tight schedule, we practically barged onto the Cairn so we could get this picture and start descending quickly. 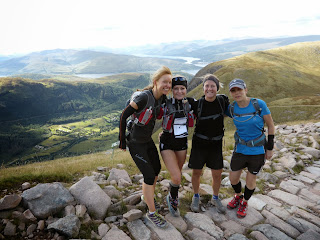 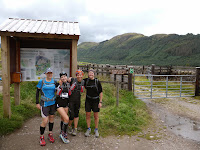 The Ben gradual gradient means it can be quite time consuming to ascent, but you can make a relatively rapid and safe descend.

After wasting too much time faffing about in Fort William – this is when a support driver would come in handy – we were en route to Scafell.

The torrential rain on the motorway and then fog on the minor roads made the journey quite arduous.

On arrival at Wasdale Head we were greeted by a group of men standing in the carpark in their underpants.  Obviously another 3PC party, who looked slightly broken and soaked to the skin after completing Scafell (989).   I later learned that all decorum would go out of the window for us too.

It was after midnight and even though we weren’t overly excited about what lay ahead, we dressed quickly – with an abundance of layers and waterproofs – and headed off up the hill.   The GM had been down to recce the route the week before, but I made the stupid mistake of leaving the GPS and the GM’s map in the car.  We debated going back for it, but decided to press on. 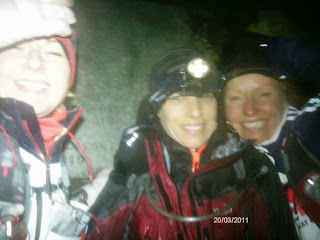 I will skirt over this bit as not to provoke the critics of my navigational complacency.  We came off the track on the ascent, so retraced our steps and followed another route to the summit.   Longer than anticipated, but done and dusted.  We were delighted.  That would not last though,  as we got spectacularly misplaced (never lost) on the descent and ended up going back to the summit a further two times.   All I’m going to say is that it was daylight before we finally made it down.  That’s all you’re getting.  Over six and a half hours to do what can hardly be classed as a mountain!  It was epic, but we haven’t stopped laughing about it since.

We were down, but not out though!  With the GM behind the wheel (and her own version of the highway code) we were on our way to Llanberis – on a mission.

At the carpark at the foot of the Snowdon (723 metres), the attendant said he knew we were Three Peak Challengers because of our accents.  Or maybe it was because we looked like we’d been up all night.  He then said it would take about 5/6 hours if we made good pace.  We only had 2 hours 40 to complete the challenge in under 24 hours.

To put it bluntly, we whored up and down that mountain – practically knocking women and children out of the way.  I’ve never been on a hill so busy. I suppose the fact that there’s a train to the summit helps!  There was a Rat Race going on too and we were going against the grain. 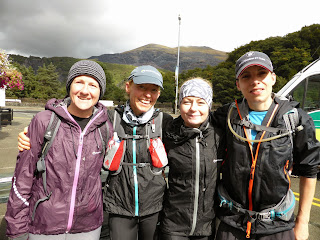 We did it though. In just over two hours – finishing the challenge with 19:38.  We could have stopped in café at the top after all.

We celebrated that evening with some Indian food and few too many beers.  We had a brief chat with a couple at the table next to us who were proudly displaying their well-earned medals from the 20-mile Rat Race that day.

We overheard their conversation about the 20-mile Rat Race being the “obvious step-up from the Three Peaks Challenge”.  So we’ve decided if we train really, really hard we might be able to make the step-up next year :-)

Sounds as though you had lots of fun!

Sounds like a good trip! Scafell Pike probably quicker from Seathwaite in 3 peaks trips (bit more running, not so steep, a lot less driving). But I guess it's not the sort of thing you do twice....

Debs and navigation - you couldn't make this up! Love reading these continuing adventures. Sounds like a grand day out.

Debbie, sent you an email to Dailymail address. Perhaps you have seen? Thanks, GaryT