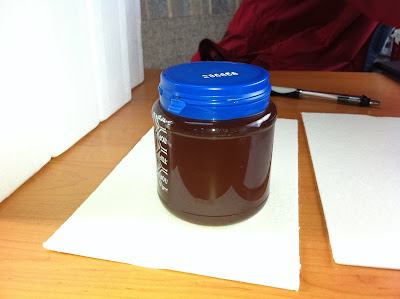 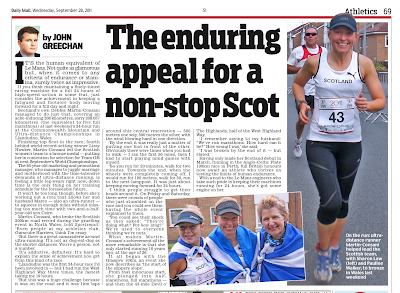 Ooh... that looks like rhabdomyolysis. Had that happen once and was scared to death.

You might want to edit to "put my underwear on me" - I'm laughing at the thought of Sonic wearing yours.

Too funny! So you are human after all. I walked like that after the Fling - in fact I had to come down the stairs on my bahookie as I couldn't even be as 'elegant' as you two lovely ladies. God knows what I would look like after a 24hr race!
That pee is seriously concerning! You really, really need to work on your ability to hydrate and fuel while running!
Hope you had a good hol and that your cankles have deflated!

I looked at the picture first,and thought it looked like a tasty jar of honey.......

Guess I'll now be double checking the label next time I get my honey out the cupboard...... :-)

Great blogpost, and very bold of you to go so public, and into so much detail, on the after effects of such an event. So it's not just a case of smiling, collecting medals, eating lots, and resuming training after a couple of days rest.

Hopefully the ecstacy of your new record, and the medal, go some way towards alleviating the agony that your spell out so graphically.

Honey? Mmmm, looks more like cuprinol wood stain. Did it do what it said on the tin?

that post was so funny debs..loving the walk and the pee! bet you were right as rain three days later mind!

Having witnessed the immediate aftermath of your race I can honestly say you gals gave it your all.

I remember Richie saying once that after a 24hr race you go from being the fitest you've been to being overtaken by the slowest granny on the way to the shops!

Glad to hear you are running again and back to 'normal' ....

scarey! i might rethink that *i want to do a 24hr after being inspired by you* thought

Pot and kettle Missy!
I didn't race Loch Ness I only ran it, and well over half an hour over my PB too.
Hard core not fainting after 24 hours! x

Golly Debbie, you don't do things by halves, do you?! I agree with SteveQ that it looks a lot like rhabdomyolysis but it's not easy to tell from the photo. (http://en.wikipedia.org/wiki/Rhabdomyolysis)
In RM, the urine may be brown (& frothy) due to muscle breakdown products. It can be a serious condition but it seems like you've escaped the nasty aspects of it. Still, it would be worth checking out the link so that you know more about it in future.

I remember handing in my pee after then WHW race in 2009 and thinking I had that long word thing it was so dark. Then the dr showed me the other samples and I was classified as "moderately coffee coloured". I'm pretty sure not one diagnosis was made that year.
Think Kaz should read the race guidelines before suggesting you should be more hydrated!
How was Madeira?