The torture tour of Glasgow

Appropriate training for a 24-hour race is a wide open to debate. As with all ultra-running training it's very much a personal thing. It's not as if you can google a tried and tested training schedule, download it, stick it on your fridge and get cracking. Believe me, I tried it. My three back-to-back long runs plan came from some random forum on some random website about some random guy who had run some random 24-hour race. To me it seemed like a good idea, so I pinched it. I don't even think I read anymore of the discussion on the matter. That was weekend training part one.

Weekend training part two was a plan devised in my own crazy thoughts. I may have mentioned it once or twice before, but I don't like surprises. Ignorance is never blissful. So I thought it would be a good idea (remember it's personal thing) to schedule in a 24-hour WALK. I ran this idea passed a few people. Everyone seemed intrigued, but no one said it seemed logical. Team selector and uber experienced ultra-runner Adrian Stott, even called on the guidance of William Sichel for his thoughts. He said it wasn't necessary, but could see my reasoning. There was a lot of chat on the damage that it could cause to my heels, which I didn't take as serious as I should have.

The original plan was to take the ferry over and walk around the Isle of Arran (55 miles) with the GM - who's also on the team for the 24-hour race. But then the GM got injured and that was knocked on the head. Unfortunately it wasn't knocked out of my head. A plan's a plan. Although without my trusty sidekick, a nice scenic route and the sense of achievement, I started to back track a little. I wasn't brave enough to walk round the island alone and I certainly wasn't comfortable with trawling the streets of Glasgow on my tod in the wee small hours.

So the torture tour started at 6am, just before a beautiful sunrise. I wasn't going to be rigid with plans, times or distances, as I was just going to see how it went. It was all about time of foot. Ok, I was back-tracking a lot.

I won't bore you with the details of where I walked, as I've tried to erase it from my mind, but it started on a loop round Milngavie then covered the west end, southside, out to Braehead, back through the city centre and back round the west end.

Throughout the day, all was going well. Although walking routes you tend to run takes FOREVER. Maybe popping into shops when something caught my eye didn't help. Although it was nice to finally get round to browsing in Run Urban, the new running shop on the southside. Plus it gave me a goal to walk the 23 miles (via the long way) to get there.

After about 30 miles the thunder and heavy rain started. I love running in the rain, but I don't share the same enthusiasm for walking in it. Then my heels started to rub and blister. I generally don't heel strike when I run, so the different walking action was taking it's toll on my feet and hips. And it was helluva lonely out there.

I decided to cap it at 50 miles. The idea of walking into the night - in Glasgow! - was not very appealing. 50 miles or 16:30 hours on foot was a good start. Plus, I helped with the economy. The good thing about urban walking is that you don't need to carry too much in supplies. Just me, my gadgets and some extra clothing. En route I purchased Meal Deals from Tesco and Sainsburys, sweets and juice from Asda, coffee from Costa and to finish off the culinary tour, a pizza from Morrisons. I should be a secret shopper. I had to run for a mile or so to get to Morrisons before it closed. The jogging motion felt soooo good and all the discomforted instantly disappeared. That's a good sign after 16 hours. Although after being on the go for so long, I would highly recommend avoiding the self-checkout tills. It nearly got a good kick.

To be honest, I didn't think walking 50 miles could hurt so much. My hips ached and I'd suddenly developed "cankles". But hey, no running all weekend. Although being a sofa athlete and watching various races unfold was just as exhausting. Well done to Matt, Paul and Lucy for the top three at Speyside. Huge congratulations to everyone who conquered and fought well at the UTMB. That looked epic and provided edge-of-the-seat drama for a couple of days. Then Mo Farah narrowly missing out on gold at the World Championship 10,000 nearly tipped me over. 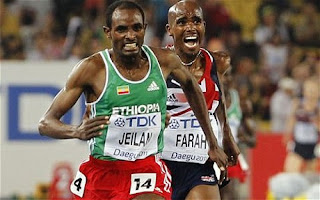 Every picture tells a story and this one is filled with emotion.

So, what's your picture story, Richie? Is this how babies are made? After a top 50 finish in the UTMB as well. Now that's endurance :-) Congratulations guys!! 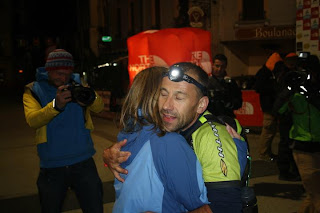 Oh my! That sounds a bit painful! Hope it helps and your heels aren't too sore for too long.

god i hate walking when i could be running! well done! i did the moon walk and after 16 miles was in absolute agony! lower back and hips ached so much i was all for packing it in. but i hunched into jogging stance and ran my last ten miles [walking passed other participants as jogging wasn't looked on with any respect in a walking event!]. i vowed never to walk again over such a distance and next time i did 26 miles i ran!!
your body is trained to run and you have developed your running muscles and strengthened them. walking uses different muscles and puts strain on areas if not built up over timed and trained for. hope you feel better soon and be back on form as usual! xxx

Hope everything is coming together for the 24hr race.

This is one of my favourite blogs. Cracker of a read

Getting advice from someone as good as Sichel can be a two-edged sword! When I first wanted to do 24 hours, I sent an email to Roy Pirrung and asked him what he learned in his first 100 mile run that would help me get from 17 to 21 hours; his answer was "Nothing. I finished in 14 hours." Then I started asking average people.

Knowing I'd have to walk a long time, I practiced walking and - it does use muscles differently than running, so I fatigued oddly. I also had blisters on the backs of my heels. Still, if you aren't going to run the whole thing, I think it's a good idea.

I once wrote a post about a 100 Mile schedule and it still gets 10 hits a day, so I had to add a disclaimer and point people elsewhere. There's a lot of bad info out there... and some of it's mine.

What a training session! Next time let me know (I guess there won't be a next time!) as I could have accompanied you a bit, maybe guided you through the streets of Springburn?!

lol@ SteveQ and his answer from Roy Pirrung :o)
you are nails Debs, great blog, made me smile

16 hours walking round the shops? My wife does that every Saturday...

what a different, if not slightly bonkers, training idea debs!

Nearly all the best 24hr runners stick in scheduled walks. Good to practice it. Run, walk or stagger it all counts.

Since you asked, here's the link to the 100 mile schedule:
http://stevequick.blogspot.com/2009/06/100-mile-training-schedule.html
It's not terribly useful, I think.