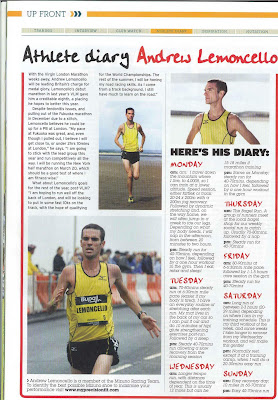 Come on Debs, what most woman ofter underestimate is that producing a high score on the X-Box is NOT easy!

Honestly, you ARE in great shape and I am proud to be in your team!
Bring on the race!
Crazy G

Mothers of multiples? My mother had two sets of twins - all boys - and said one girl was harder than all the boys put together.

Apparently me and Pauline never slept all night until we were four, it’s surprising we have a wee brother, but he is seven years younger and Mum said he was a delightful baby but no doubt after us Attila the Hun would’ve been!

Just as well you are as fit as you are .... otherwise you wouldn't keep up.

Hope you can have a slightly easier week in preparation for next Sunday.

Debs, tell us what you really think! ;) i thank the lord Stephen had grown up by time i started running and take my hat off to you, i'm exhausted reading that. Great to see you today, you're looking great for a stressed out bloody busy yummymummy xx

I'm so glad that someone else has the nightly bathtime/bedtime craziness with their toddler, Debs! It's enough to send me to the liquor cabinet most nights....well if I didn't have a two week old baby I'd be on the grog. Dear god, how am I going to get TWO kids bathed and dressed?? Very funny post!

Hi Debs, hopefully nobody in the office reads this for your lunch hour times, but as we disturb you nightly with pdf's I am sure you are due more time for your lunch break, good luck for the race, always knew you would look good in blue!

that was very entertaining. Thanks ;-)