With the rise of ultra-running and new races popping up all over, it’s often too easy to pick a race just to appear at the pointy end of the results.  I appreciate you’re only as good as who turns up on the day, but I’ve been known to refer to them as “Mickey Mouse races”.  And I've done a few ;-)

This year’s Hoka Highland Fling certainly wasn’t one for pot hunters.  As host to the UK Trials and Scottish Athletics National Ultra Trail Championships, the depth of talent within the 700+ runners  was by far the best the UK has ever seen.

I’ve always been a part of the race - mostly crewing - since 2008.  And ran it in 2010 and 2011 finishing 3rd and 2nd lady.  The latter being a bit of car crash, as I was (not so) fresh from running a 100k road race four weeks early.  My previous best was 9:39 and as I’d like to think I’ve improved as a runner in the last five years, I always vowed I’d go back and run a time I’d be satisfied with.  Like, for now, I’m happy with my results from WHW race and Devil o’ the Highlands.  So, I needed to address the balance for all three races on the West Highland Way.

So, that’s how I found myself standing shoulder to shoulder with some of the UK’s finest ultra-distance runners at 6am on a chilly Saturday morning in Milngavie.

The field was – as our stateside friends would say - stacked.  In the ladies race, I was up against the likes of: USA’s Devon Yanko; GB trail runners Sally Fawcett, Lizzie Wraith and Bonnie Van Wilgenburg; Sophie Grant and new-kids-on-the-block, Beth Pascall and Sophie Mullins.

I don’t have the raw speed – and probably the self-belief - to compete well at 50 miles.  I think I’m more competitive over longer distances, when my stubbornness and pacing ability comes into its own. Although I had taken confidence from a second place finish and 10th overall at the Montane Lakeland 50 last summer - in a time that would have taken GB silver at the championships the year before.

I had my eye on a Scottish Championship medal.  As did Sophie Mullins, who had just won the Scottish 100k  Championship.  Caroline McKay and Nicola Adams-Henry, who finished 2nd and 3rd respectively at last year’s race, both running sub nine hours.   And Helen Leigh, Morgan Windram-Geddes and Lorna McMillan.

As suspected the race went off fast.  Very fast.  The 12 miles to the checkpoint at Drymen was always going to be a race within a race.  It’s not my style to get caught up in the excitement, I just wanted to stick to my own plan.

Familiar faces passed me early on asking if I was injured or using the race as a training run.  Neither was true.  Basically I wanted to run within myself for the first 20 miles and then see what happened.  Although I had a race plan, that plan didn’t involve anyone else or a race position.  I knew I would probably see those familiar again later in the race.

Marco and Cairn were on crew duty for the day.  I arrived bang on schedule at 1:43.  Joking with Marco about being exact to the minute, I exchanged a bottle and kindly threw my rubbish at him and moved on.  No information was passed, as I wanted to remain blissfully unaware of the race ahead or my position until at least Beinglas (41 miles).  My only competition was myself.

The first section of the race is my least favourite, so I was glad to get it out of the way. Plus, I knew the early fast and flat miles would wipe out a few over-zealous participants, and that’s always when the race really starts.

I’m not really big on running with people during races, but I do enjoy brief exchanges.  I ran with Kristof from Poland for a few miles, just chatting through our plans for the year and bucket list of races.  By the time I hit the bottom of Conic Hill, I pushed on, looking forward to a fast hike and something to eat.

In true Fling form, which traditional brings fine weather, we were greeted with blue skies and sunshine.  Although there was a nip in the air, the cool temperatures and dry ground was optimal for racing.

I arrived at Balmaha in 2:52 (ish) and swapped another bottle and grabs a few gels from Marco.  Quick hug from my bestie, otherwise known as the Gibbering Midget.  She was “the boss” of the Balmaha CP and drop bags, a role which I’m sure she relished and shone ;-)

Along Loch Lomond side, the views of the glistening water and hills beyond were breath-taking.  Talking to runners on the route who were enjoying their debut run on the WHW, made me feel so proud to be Scottish.  Although they should try it on a real Scottish day to get the true experience.


I love the cheekiness and mixed terrain on this section.  From shingled beach, to rocky path, compressed track, a few steep inclines and wooded areas with tree roots designed to test your fancy footwork.  Regardless of the amount of times I’ve run this over the years, it’s always tougher than I remember it being.  Although I was happily catching and briefly chatting to runners.

Arriving at Rowardennan, I could see Marco was having a tough time keeping tabs on the kid.  Cairn loves the freedom of outdoors, but he’s a bit of a liability.  Typical boy really.  I don’t think I was helping his stress levels when I had a mild strop because I wanted “TWO SHOT BLOKS” and he’d only brought one out to the CP – as per my plan.   My race disclaimers is…what goes on the course, stays on the course.  Covers a multitude of sins.

Rowardennan to Beinglas is my favourite.  Some runners struggle with the technical bits, but I think it suits my running form – short stride and high cadence.  Plus, it helps to stay positive about the inevitable slowing of pace and just embrace the suck.

I knew I ran my best over these miles, but results tell me I was 16th overall for that section, which I’m quite happy with.  It also meant I passed quite a lot of runners, including a few females in contention for Scottish Championship medals and some of my local (male) heroes.  At any other distances they would leave me for dust.  Actually they did a few hours earlier, they just couldn’t sustain it.

I know the sport of ultra-distance running is renowned for its camaraderie, but I get such a boost passing people and - please don’t judge me for saying this but - even more so if they look ruined.

Heading into Beinglas, I was feeling on top of the world and had gained on my club mate, Nicola Adams-Henry.  Nicola is a super strong runner and was 3rd in the race last year, but she looked like she had slowed considerably.

My main goal was to get there feeling good, as the last half marathon can make a break the race.  I honestly couldn’t believe how sprightly I felt.  I may have been slightly playing up for the small crowd that was gathered there though.

Quick pick up of some Coke from Marco, which I was saving it for the last section and some Shot Bloks (I think he had about five this time) and off I went.  Feeling dynamite.  Maybe the short burst of excitement was a bit much, as half a mile later I was practically swaying.  I felt like the life had been sucked out of me and every incline felt like a mountain.  Nicola passed me again.  I think the sight of me was the kick up the ass she needed.

I vowed not to do my usual and refuse to eat in the latter stages and forced myself to take on fuel.  After what is affectionately known as Coo Poo Alley – trust me, that’s not mud - I was starting to feel better and picked it up again.

I spotted GB trail team runner, Bonnie on the climb above Crianlarich.  In turn, I think the sight of Bonnie was the kick up the ass I needed.  I was hands-on-quads marching up the hill at that point, but even in the distance I knew she was hitting the same low I had just wriggled my way out of.

I passed her and then another two runners, and felt a big surge of energy.  Even with only a few miles to go, I wasn’t willing the race to end.  I was just content to be there.  Last bottle change from Marco and I only had three miles to go.  It was only then that Marco told me I was 6th lady.  He was trying to push me to catch Nicola, but she was end of sight having run a storming last section.

The Gibbering Midget had come out for a run and was cheering as I passed through Auchtertyre Farm.  It must have been a momentous occasion as she took a photo.   I don’t recall her ever taking a photo before.

Heading into Tyndrum the bagpipers welcome every runner though.  I’m not usually a fan of bagpipes, but for one day every April it’s the best sound in the world.    And just one of the many little touches that make the race so magical

I turned the corner into the final straight on the red carpet.  Cairn was waiting at the side lines, poised, ready to run in with me.  It was a beautiful and heart tugging movement …then the little buggar dropped me like a hot tattie.  Consani by name, Consani by nature. 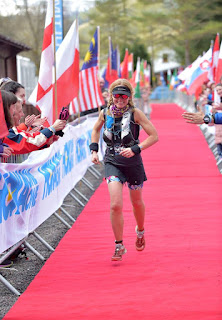 I finished in 8:44 in 26th position overall and 6th female.  A few minutes slower than I wanted, but let’s not split hairs.  If I was told on Friday night, I would run that I would have taken it in a heartbeat.  I also took silver in the Scottish champs and was first V40, with a new masters’ record.  Hey, I’m shameless, I’ll take anything.

Some of the performances on the day were … wow. I have no words.  Beth Pascall smashed the ladies record, which has stood unchallenged since 2008.  Beth is like the Scrappy Doo of ultra-running.  Along with Jasmin Paris, they are going to raise the bar for British female runners.  And the guys should be seriously worried.  Donnie Campbell also broke the men’s record to finish in 6:51.  Maybe he was a shock winner, but probably not to him.  Known to his coaching clients as The Wolf, he is one fiercely determined guy.

The top 11 women finished in under 9 hours, in times that would have won the race in previous years.  I think the adrenaline and excitement of the race filtered down through the field, as there were so many great results and PBs.

It’s always been a great race, but since John Duncan (commonly known as Johnny Fling) took over as RD he has improved the race experience and carnival-like entertainment factor ten-fold. Where else could you sprint finish on a red carpet, through a line of international flags and high-fives, at the foot of the some of the most breathtakingly beautiful mountains in the world?

So, for now, The Fling has been flung.  See you on the other side next year …. Ding ding.

Superb race report as always and congratulations on a great run.

Exciting read....I almost felt I was running up there with all you elite! Great run, well done. Ax

Great race report Debbie, I was out on the course supporting you as I had to pull out due to having a cartilage operatoin on my left knee, you looked great and relaxed and well done on your pb and winning your trophies.