Last summer, I was asked to be part of the new Bodyworks Exhibition which opened last month at the Glasgow Science Centre.  Considering I have the psyche myself up to wear a pair of shorts, the prospect of being shot in my undies was somewhat nerve wracking.   Especially when I turned up to be shown into a room with baby oil and weights, which I was told I could use to prepare myself for the shoot. I declined and opted to pace the floor inside, whilst listening to a fencer being pictured at the otherside of a curtain as onlookers oohed and ahhed at his muscle definition and chiselled physique. Gulp!

Then I was shuttled in wearing only my pants and bra to be greeted by the photographer... who I used to work with on a previous newspaper. Awkward!

Here's the marketing bit "All about you and the science underpinning health and wellbeing in the 21st century. Be a snot ninja, run in the giant hamster wheel, perform a virtual autopsy, solve a murder and bust some moves at the DNA disco. Record your own physical and physiological performance on your personal passport and compare with other visitors or become actively engaged with cutting edge research through in-depth research capsules and real-science live lab experiences. Come and find out how your BodyWorks" 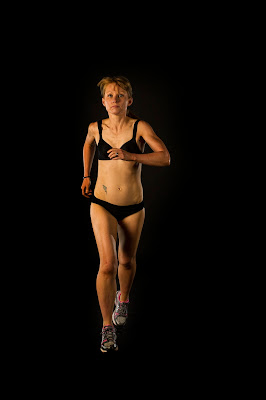 My picture is part of a montage on sportspeople and their different body types. 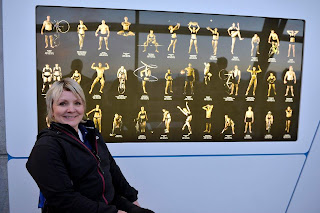 We went along to the opening night last month. As it was three days after the Thames Path 100, my body was most certainly not working!

It's a fantastic exhibition.  Great fun for kids.  And Cairn had a good time too :-)  It's a permanent exhibition - included in the usual entry price. Hightly recommended for a day out.

I recently came across your blog and have been reading along. I thought I would leave my first
comment. I dont know what to say except that I have enjoyed reading. Nice blog.
I will keep visiting this blog very often.
flights to Umrah
cheap flight to jeddah
flights to jeddah
umrah jeddah flights
umrah flights from London
cheap flights to umrah

You are a mother Debbie! TUT TUT!

Ha ha, Heather (AKA Rachel from Suits). I wasn't a Mother when I was 17-years-old and went into a tattoo palour with a silly idea and some fake ID :-)

Haha! We make the best decisions when we are 17 don't we?!? I was a piercings gal myself! And still stuck with them!

Loving the Tat though, makes you even MORE hardcore (if that's possible) ;) X

you are gorgeous!! nothing to worry about there!

I love what you guys are up too.This type of clever work and reporting! Keep up the amazing works guys I've added you guys to blogroll.