I signed myself up for the Clyde Stride (40 miles) this weekend. I doubt there's anyone out there who doesn't think this is a silly idea. Well, apart from Race Director, Mrs MacPirate.

To be honest, when I was doing half-arsed job of helping out and an even more half-arsed job of support - let's just say I was there! - at the race last year, I didn't think it was my cup of tea. Too flat. Too much road. And I'm just too lazy to run non-stop for that long.

Now that I covered most of the route, I take it all back. Once to get out of Glasgow (Shock! Horror!) it's actually really nice. 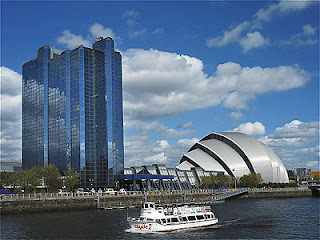 Call me unadventurous, but if the race is within ample travelling distance from your doorstep, it's worth the effort to move a few training runs. Like I did before the River Ayr Way Race last year, I like to cover the course before the race because:

1) In ultra-distance races - especially off-road - I believe the runner is responsible for their own navigation. There's only so much organisers and stewards can do to keep you on track. If you need someone to hold your hand round every corner, then best stick with the ParkRun. If you get lost, you've only got yourself to blame.

2) I'm not one for surprises. I like to know where I'm going and "see" the course before race. It's good to know where the nasty and nice bits are. I understand this is personal and lots of runners like to experience something new on the day.

3) Logistical errors add to the stress and in some cases can even ruin a race. How many navigational-fuelled tantrums have you seen on a course? Jeez, I've seen a few dummies spat on a 10K road race!

4) I can leave the maps behind and just concentrate on running and enjoying the race.

So, I split the course up in four training run chunks. All have their own little dramas. I've gone wrong in all them. When I retraced my steps and got back on course, I've always wonder how I managed to go off in the first place. Silly errors. You understand my recce requirements now?

The first run was to Cambuslang, which involved a detour around the Commonwealth games athletes village. Getting lost in Parkhead was not ranked high on my list of extreme adventures - but I did. I think I may have taken the longest way, but I got there in the end. Diversion signs are brilliant, until they just stop.

Second was Cambuslang to Bothwell Bridge, when I managed to veer off within about half a mile. I clutched the route description and map and followed it to the tee. When you're by yourself, you never quite know if you're going the right way. Thankfully with the river by my side, I knew you couldn't be that far off. But was it the right river? After circling a woodland area, I found the next section passed the David Livingstone bridge. I was approaching a nice couple out walking their dog and stopped to confirm I was on the right trail. The chap starting giving the "quickest way" direction until I cottoned on to the fact, he was sending me along the expressway. Quickest way indeed, but I took my chances with my instincts. And I was right. Although I did have to ignore the keep-out/danger signs and sneak through the scaffolding holding up a bridge. At Bothwell Bridge I took a wrong turn and followed the cycle route signposted to Strathclyde park. Huge mistake. After a mile or so, I realised the mistake and just about turned to the nearest train station. Lessons learnt.

Next run was Blantyre to Muirkirkbank and then on to Lanark Train Station. This time I had the GM for company. Two non-map readers are better than one. It was a scourching morning we when arrived at Patrick Train Station at 7am. As we approached the station, a group of young lads were exiting. Obviously the spill out from the night before. I would say they were about 13-years-old, but as Glasgow males are generally below average height, they were probably about 25. One turned to the GM and said: "nice shorts, hen" and then rendered her silent with "they'd look better on my floor!". Brilliant!

The run was great, but it was always going to be tall order two weeks after the WHWR. Navigationally (I'm not sure that's a real word), it was pretty uneventful. A few brief pauses to check maps. 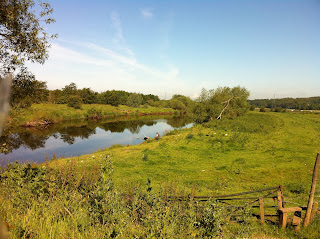 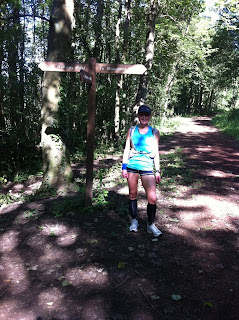 Once passed Strathclyde Park, there are lots of Clyde Walkway signs, but they're in the most obvious places, where you couldn't possibly go anywhere else! 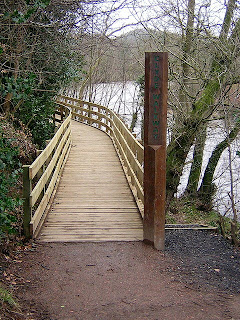 I'd sold this run to the GM on the basis that it would be about 18miles (ish). 20 max. So when we were still running through woodlands at 19 miles, with no signs of exiting, I could feel the eyes burning in the back of my head. Her knees were playing up and she'd lost the will to live. Or at least she'd lost the will for me to live. Once through Muirkirkbank we asked a chap for directions to the train station. When asked if it was far, he paused and said: "eh, about three....(F**k I'm in trouble)...quarters of a mile". Phew!

So, it's taper week again. Good luck to everyone running on Saturday. I've just seen a picture on Facebook of Mrs MacPirate out vandalising the countryside, so it should be well marked.
Posted by Debs M-C at 08:35

OMG nearly snorted my coffee back out through my nose at the 'nice shorts... better on my floor' comment! Hilarious - I'd have died if it had been me - too funny!
Quite right - I like to know a route too. You have me a bit worried though - hubby is doing leg 2 as part of a team (Strathearn Stags - yeah, I know...) and he has a pretty astounding ability to take wrong turns! Fingers crossed for good weather. Don't suppose you know if the Morrisons at the start has a cafe/baby change/is open at 8am to feed Murray?

Good luck for Saturday Debbie. :-) I had entered but had to pull out due to injury 3 weeks ago. I'm sure you'll do well since you seem to know the route. ;-)

I reckon it's perfect timing and think you will be awesome ;-)