Seen as I've been assigned such a comedy race number, it would be rude not to partake in Saturday's Highland Fling. 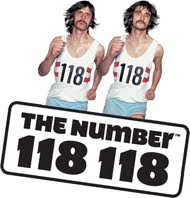 I've had a few good runs over the last week and a few stinkers too. I've got no idea how my legs will be, but I'm really looking forward to it. Sonic has had to pull-out - see his blog for details - so some one's got to take one for the team. Cairn's not quite ready for his first ultra yet. Although he did manage a couple of miles on the Kilpatrick Hills on Easter Sunday. We're not pushy parents, he's just not up for being strapped in his back pack for too long. 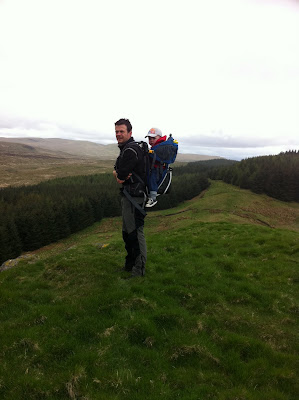 Cairn's quads must have been sore, as he was using JK's descending the Devil's Staircase approach.

On another note: At Garscube Harriers' AGM I was awarded with the club's "Most Meritorious Performance" Award...for the second time. I also won it in 2008. It came as a massive shock, as the engraved names would suggest that no one has won it twice. 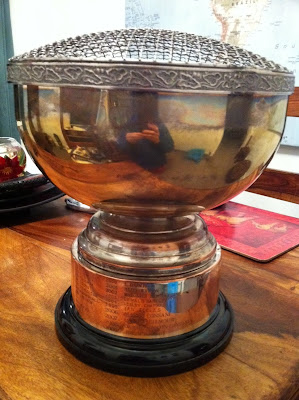 So I'm now officially resting for the Fling. Last run tomorrow. This year, I'll be following a race plan and splits devised by Sonic, instead of my usual lets-just-wing-it strategy. So, this year my plan is to get to Drymen 10 minutes SLOWER than last year. Nervous about that? You bet he is :-)
Posted by Debs M-C at 21:12

Well done on receiving the award again - well deserved I think! Loved the clip of cairn! See you Saturday (I'm doing registration and then marshalling at drymen) and good luck! Caroline x

Good luck Debbie! Hope you will enjoy the race and being out there on the WHW route again. See you at the finish. Silke

Cairn walks with a drink in his hand just like his mum :)

ha ha loved the video. There's a lot to be said for walking backwards!

Congrats on your award. Well deserved.

See you Saturday and hopefully you'll get a chance to run together.

Ha ha - love the number!!!! Hope the legs are on a good day and you have a great run.
Well done on your award - well deserved indeed!
I can only imagine Murray will be the same in no time as he just loves to be on the move all the time and the backpack will become far too boring!
Love the video clip!
Re: your comment on my blog - Murray is the absolute spit of Al as a baby. i'll try to get some phtos for a comparison although it freaks me out somewhat!

Brilliant! Cairn will be doing your spreadsheets next :o)

Been there, done THAT!

Have a great run. See you at the finish.

wehey, see you there! Congratulations on your award, well deserved for sure

Debbie,
Yes, I had a good run wearing 118. Hope its lucky for you too!