It's a Marcothon, not a sprint

We're now into the fourth week of our winter white-out and according to the forecast it's here to stay for the foreseeable future. Joy. It has pretty much disabled the entire country. And in true British-style, the weather is the favourite topic of conversation. Michael McIntyre summed it up during the Royal Variety Show last week, when he said the snow has become the news. National news: It's snowing. Sport: It's snowing. Weather: Well, it's snowing. The news where your are: It's snowing there too.

Who would have thought we would - well, most likely - finish the Marcothon in the same conditions we started? At first we all moaned about the snow. Then it stopped snowing and left an ice rink. Then we wished for the snow to come back. Now all we need is rain, which will no doubt give us something else to moan about. In true British Style.

Day 23 of the Marcothon and although I'm underwhelmed by the prospect of stepping outside most days, I'm overwhelmed by the response and enthusiasm of those involved. Nearly 300 recruits. There have been a few DNFs - although I'm sure there have been a few more than those who have confessed to bowing out. No wonder, it's been a tough one. There have been daily postings of hangovers, tantrums, tumbles, triumphs, struggles and lovely winter wonderland photos. Pictures which always look beautiful on screen. Not so beautiful when your ears are in danger of falling off.

There has been a little bit of rule bending, but who cares? It's all about the personal achievement and pushing yourself a little more than you normally would. Especially in the lowest ever temperatures recorded in December. Well, in Scotland anyway.

To be honest, if it wasn't for the Marcothon I don't think I would have bothered. I know it's good training, especially for mental toughness, but I'm also looking forward to:

1) Running under 8m/m
2) Not having to stop to help someone push their car
3) Turning corners without slowing to a shuffle and holding onto to a fence/lamp-post
4) No impromptu Saturday Night Fever moves, when my foot slips from underneath
5) No involuntary whooping and squealing
6) No more jaw-drop gazes from eyes that are just willing you to fall
7) Not having to start-stopping 10 feet from the kerbside
8) Wearing road shoes. Or anything that doesn't involved studs, spikes or grip
9) Being able to feel my face. And being aware that snot is running down it
10)Realising that shorts over tights is a ridiculous look. But my ass is freezing.

Not only has the Marcothon attracted record-holders, ultra-distance race winners, and even some running "celebrities", there are some real humbling stories. Ann McLachlan was stuck in hospital and used the four-hour a day when she wasn't linked up to a drip to complete the distance/time by stomping round the hospital wards and stairwells. How's that for dedication? One chap started the journey on a treadmill on a oil rig in the north sea and another hasn't even done a 10K - yet!

Given the conditions, it's just head's down and plodding. No sessions and no big runs for me. The most I've run is 17 miles with the Gibbering Midget. Even then we planned to run 25 miles on an out-and-back from Milngavie to Drymen. We almost threw in the towel at the car park, but managed a slippery seven miles before we about turned and did a circuit round Langbank. We did have a hoot though. You know you're out with the GM when you say something positive like. "Look on the bright-side. It's not raining. It's a beautiful day. And your glittery eye-shadow looks fabulous". Given that we both had Christmas nights' out that evening, we'd both gone a bit OTT on the fake-tan and turned up like satsumas. Although the GM looked immaculate as always, which might have more to do with her post-run liaisons :-) 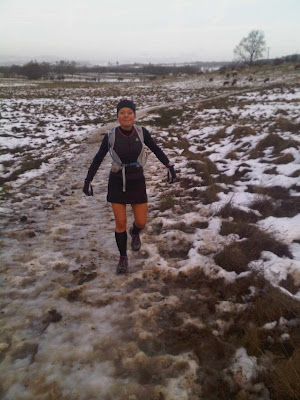 The Gibbering Midget: Outfit by Adidas. High Viz tights: Model's own.
Posted by Debs M-C at 08:59

Congrats on grinding it out. Just see it as character building!!

Have a great Christmas.

Well done for keeping going on through all this snow.

Hope you all have a great Christmas and see you soon.

i think sharon forgot her bottoms that day!! is she mad?? i was shivering just looking at this photo!!

I read that as 'hi-vis thighs' woops xx

This blog aware me about different programs which can become very useful for our friends and kids. Few websites provide combined courses and few of the are separately for single subject. Glad to get this information.zwangerschapsmassage haarlem