Wow! Has it been that long since my last post? And I haven't got that much to say. I've made a half-arsed attempt at training for the River Ayr Way Race this Saturday. I'm only doing it to make up the fourth event to qualify for the Scottish Ultra Marathon Series. I'm guessing the majority of the field are in the same frame. I'm kinda cursing my DNF at the D33 now, but needs must.

So what's been happening over the last month? Still can't believe it's been almost a month since my last drivel-session. Well, I recovered fairly well from the Devils race - once the bruising and swelling had gone down and I could bend my knees again. I'll never again underestimate the importance of fully functioning knees when looking after an exuberant toddler.

Then there was the trip to Chamonix to support the troops on various races on the Tour du Mont Blanc circuit. Anyway who follows ultra running will know all the races were stopped/suspended/re-arranged. A lot of whw blogs have gone into detail, but I'll spare you. Despite only being on the sideline, it did put a bit of a damper on the holiday. Quite literally, courtesy of the monsoon conditions.

Here are some pix of the sun shining. 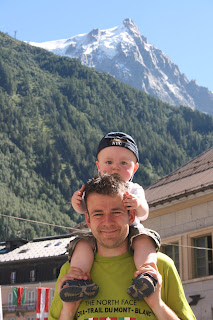 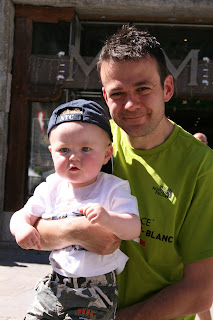 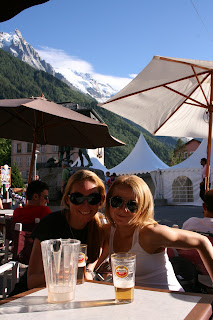 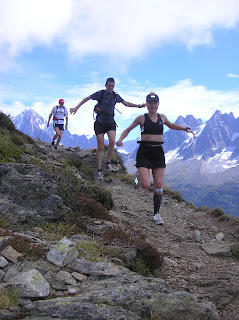 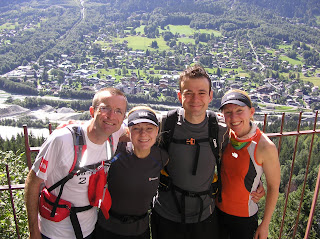 When it raining, it was bloody awful. Especially in a region that's so geared up for outdoor activities.

The morning the CCC started, the GM and I ran from Chamonix to Les Houches and I don't remember ever being that soaked. No wonder there so many who bowed out of the race - even before it was eventually stopped for less-able runners.

Thanks to the Crazy German for providing a comedy lifeline and DNF-ing at 5K. Although he maintains "it was six!". After he successfully completed the WHW on this third attempt, I've been a bit low on the ground on mocking material. Thanks, CG, for taking one for the team. The Courmayeur 5K will always have a special place in my heart :-) The comedy highlight was the night the UTMB started. Whilst running to a restaurant to escape the torrential rain, the GM shouted "Come on, Thomas. We'll get you up to 10K today".

Let's just say, I better not DNF this weekend.

I've been lucky enough to cover the full course on two training runs, so I've ironed out the logistical nightmares. I just need to find my mojo.
Posted by Debs M-C at 08:23

I'm sure all the mojo's are all huddled together somewhere nice and warm and sunny. Either that or they are taking lessons from Ray for the World Hide n Seek champs :)

Yup- my mojos not what it should be either! Have a good finale run!

ah look how big Cairn is!! It flies!

This time tomorrow we'll be 18mins into the race!!

Sleep well and I look forward to following you throughout the course but don't look back as I MAY be within sight!

Good luck with it, and finding your mojo. :-)

See you and your mojo there Debs :o) x