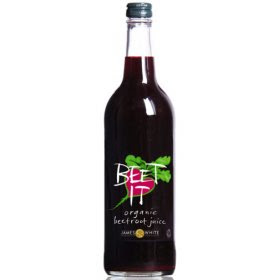 If the latest news reports are anything to go by, then drinking beetroot juice can "boost stamina and help people exercise for up to 16% longer"

"Apparently a UK University team found nitrate contained in the vegetable leads to a reduction in oxygen uptake - making exercise less tiring. The researchers believe their findings could help people with cardiovascular, respiratory or metabolic diseases - and endurance athletes". The research was conducted on a group of cyclists and suggested that drinking half a litre of beetroot juice a day for a week enabled them to cycle 16 per cent longer before getting tired out. They found that drinking beetroot juice doubled the amount of nitrate in the blood of volunteers, and reduced the rate at which muscles used their main source of energy...or something of that ilk.

I know a few folks - none who of whom are sane of mind though - who have embraced these findings and are necking the stuff by the bottle. Obviously the Subversive Runner skimmed passed the bit in the research that says it works best with regular TRAINING and a healhy diet.

Well, I've been regular drinker since way back last Sunday. It's not too offensive. Really it's like drinking the juice out of a jar of beetroot. I don't really know why I thought it would taste any different from that.

Sonic has been consuming too. Not purchasing, just consuming. He followed his first trial by saying he'd "rather drink his own pish". Subsequent glasses of the fine beet later and he informed me he thought he's "shat a tampax". Readers of his sporadic blogging will know he's fairly graphic in the details of waste disposal regardless of the amount of times I tell him: "I don't do toilet chat".

One thing for sure is that our "pet" mice won't be jumping on the wagon. The last moose aboot the hoose managed to work its way through a lucozade gel and half a bar of tablet before trapping itself in the dust bin. When Sonic took it down the street to its new home on the green I was standing on the street shouting "You can't take it all the way down there. What if its family live in our garden. Have you not seen American Tail" Which was met with my rendition of Somewhere Out There.

Have a great race tomorrow.

Can you text me when you can after the finish? I'd love to know how you all get on.

Best of luck for tomorrow. Hope it goes well and the midges aren't too ferocious!

Superb!!! made me spit my tea out.

All the best for DoH, enjoy xx

Graphic toilet chat is half the fun of trail running! I ran half an ultra with a nurse, talking about horrible stuff and, all the while, people we passed or who passed us said, "PLEASE talk about something else!"

At least beets are easier to get than that fungus that grows on caterpillars in Tibet that was touted last year!

Love it! I bought the juice too after reading the study and was a bit perturbed by the pink pee. I'll give anything a try but don't think I could drink half a litre a day, just to be able to cycle for an extra 92 seconds, unless I really really wanted to shave seconds off a PB. I think I'll wait until bigger studies have been carried out before I'm convinced to buy the stuff regularly.