Usually the Garscube training schedule is quite regimental. What is says on the website, goes. End of. And hell mend the person who tries to bend the plan. But tonight's session was a little confusing, as it was "long reps / track". Scotstoun is closed for a few months - yippee - so it was long reps...or so I thought. I knew Sonic was hiding something, as he knew what the fast boys were doing. I later discovered that Jill had asked him to keep our session under wraps as it was round the bloody winter warm up. Although I'm sure I've been quite detailed about this circuit in the past, but for the sake of memory lapses...it's an 800m round an office complex - complete with two stonkin' hills and multiple speed bumps. Really it's a delight. But, to be honest, really it doesn't bother me that much anymore. It's close, quick and does what it says on the tin.

After a short warm-up, Jill broke the news that we were doing a 1600 then 4 x 400 followed by 1600. Yikes! The aim was to keep the last long rep the same as the first. Jill admirably sat out the first rep - with the excuse of watching the jackets. As we set off she shouted behind us "And I don't want to read about this in your blog!". Consider yourself blogged, O'Neil. And here's a picture of Jill and I on Kilimanjaro. See we're bessie mates really. 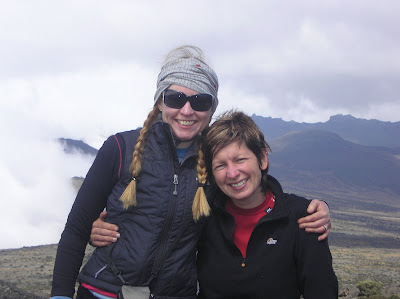 The session was really tough - especially as my calves were a little tight from Sunday - but really worth while. It's great to mix up sessions, rather than go out a do continuous mile/km reps. Reps were 7.08, 1.35, 1.42. 1.35. 1.27 (although distances weren't even remotely accurate) and 7.10.
So now that I feeling the love for the winter warm up, I need to embrace the other route I moan about...namely anything that involves running along the canal. It's the dullest run in whole world. Time stands still. It's like running on a treadmill, as the scenery doesn't change. And those wee pesky stones get in your shoes. Jill joked that the light nights are upon us so we'd soon be off the winter warm-up and back on the canal. Witch. Thankfully Sonic is the new route master for Thursday night runs. I'll be inspecting the course to decide whether I'm making his dinner. Te he.
Posted by Debs M-C at 21:56